Some of the largest law firms are striking back at non-traditional competitors who’ve grown into formidable businesses by nibbling away at lower-cost, higher-volume work.

Three major firms in the past three weeks have launched service offerings aimed at growing their share of the market for work increasingly handled by businesses often referred to as alternative legal service providers or “New Law” companies.

More law firms are expected to follow that playbook, lured by what many see as a fast-growing market that reached nearly $11 billion as of 2017, Thomson Reuters estimates.

“There is often an unstated assumption that law firms won’t change and respond to competition,” said Ron Friedmann, chief knowledge and information officer at LAC Group and longtime legal industry executive. “You have already seen responses in 2010, and now you are seeing more responses. The one thing you can conclude is if law firms see bigger threats or bigger opportunities, they will respond.”

Most Big Law firms nonetheless face an uphill battle to be seen as the best providers of lower-cost offerings such as legal staffing, legal process work or managed services.

For instance, the handful of law firms competing in that market, often referred to as legal process outsourcing, in 2017 brought in a total of $300 million, Thomson Reuters estimates. That compares to more than $9 billion for companies such as Elevate Services Inc., Axiom Global Inc. and UnitedLex deemed independent LPOs, managed services firms and contract lawyer services, Thomson Reuters said. 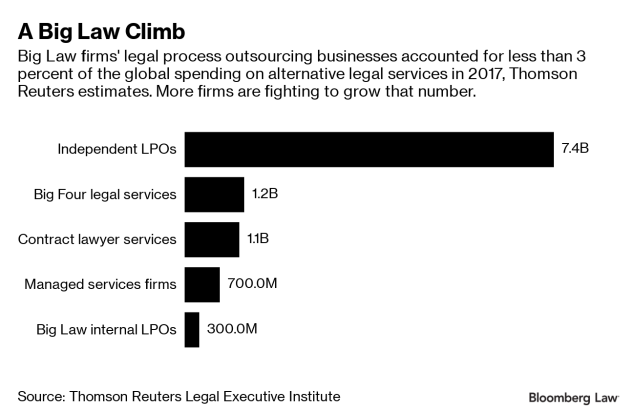 Big Law firms entering the alternative legal services market are betting that clients will want to use one provider for high-end and lower-cost services and that firms can successfully build a lower-cost business on the back of the traditionally lucrative partnership model.

The string of recent Big Law announcements began with Greenberg Traurig, one of the 15 largest firms in the U.S. Launching a subsidiary called Recurve, the firm said it plans to bring together a group of legal service companies that would collaborate to offer clients a wide range of services with seemingly little upfront investment costs for the Greenberg Traurig partnership.

Richard Rosenbaum, Greenberg Traurig’s executive chairman, said Recurve is a solution to law firms’ inability to raise outside capital in the same way alternative providers can.

But Eversheds Sutherland and Bryan Cave Leighton Paisner this week announced a different type of competitor in the alternative provider space. Rather than seeking partnerships with other providers, those firms have been building their own capabilities such as lower-cost staffing, legal project management and data analytics.

Those capabilities which the firms have been developing for years, have been packaged in newly branded entities: Konexo at Eversheds Sutherland and Cubed at Bryan Cave Leighton Paisner.

“Legal services have gone through a period of disaggregation for a number of years and this is an effort to aggregate the services our clients need under one umbrella and to provide an end-to-end service regardless of whether it is business-as-usual work, legal process work or complex advisory work,” said Katie DeBord, global chief innovation officer at Bryan Cave Leighton Paisner.

Despite those heady growth projections, law firms have their doubters.

“I think it is a great concept, but the question is: Are law firms better suited to do it than others who are already in the marketplace? My conclusion is it’s doubtful,” said Mark Cohen, CEO of legal business consulting firm Legal Mosaic.

There are six businesses currently well-positioned to handle large-scale legal projects that are melded with the delivery of legal services, Cohen said. They are the Big Four accounting firms, UnitedLex and Allen & Overy, a U.K.-based law firm that Cohen said has been developing those capabilities for 20 years.

Competing in that market requires investments in technology, staff lawyers and a process-oriented culture that most Big Law firms either aren’t interested in or capable of, Cohen said.

“I understand why some partners might think they want to get on this bandwagon,” he said. “And maybe they will get some incremental business. But in today’s marketplace, I think law firms would be wise to consider whether or not they would be better served with collaborating with those established players as opposed to taking on those established players in a game that, frankly, most law firms are not prepared to play in.”

More firms turn to alternative providers to deliver services such as e-discovery and legal research compared to building those offerings in-house, according to a 2019 Thomson Reuters survey. For instance, 65 percent of large U.S. firms said they use e-discovery providers while 15 percent said they handle that work internally.

But there is still a growing sense that law firms can effectively sell their own brand of those services rather than ceding ground to newer businesses. Among the advantages law firms have are their long-term relationships with clients; their role as a “trusted advisor”; and their ability to bundle lower-cost services with high-level legal advice.

“There is this preconceived notion that this new industry will just devour law firms,” Maziarek said. “It is hard to change law firms. But there are a lot of smart people who are focused on keeping the businesses at law firms competitive.”

To contact the reporter on this story: Roy Strom in Chicago at rstrom@bloomberglaw.com