Major law firms looking for ways to increase diversity in their ranks are increasingly opting to recruit women ready to make a lateral move from one firm to another.

The strategy benefits the hiring firms, who can then offer a more diverse team to their clients, and women, who find they often gain more business opportunities from an employer seeking new talent.

Since 2015, the number of women recruited by large firms has steadily increased, according to a Bloomberg Law analysis. Through March 25 of this year, data showed roughly one third of lateral partner placements among Am Law 200 law firms were women, though coronavirus and accompanying economic problems remain an X-factor for future hiring.

“Only time will truly tell the effect on these numbers for the rest of 2020, but the current dynamics in the market will certainly pressure test firms on initiatives in this space,” said Mary Rosenfeld D’Eramo, vice president of operations at attorney placement firm Mestel & Company.

Whatever the future holds, women are making their mark in the lateral market. Pressure from clients on firms to increase diversity in their ranks and reverberations from the #MeToo movement are among the main reasons recruiters and legal industry experts say there are more women lateral hires than before. 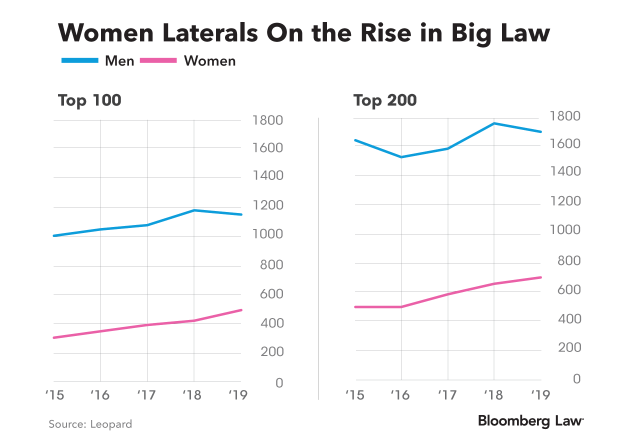 Suzanne Kane, managing director for MLegal Group, has spent more than 20 years as a recruitment leader both inside and outside law firms. When she joined MLegal in 2017, she and her team in San Francisco made it a priority to advocate for female attorneys.

Even given their focus, Kane was surprised when the 2019 numbers came in. Last year nearly 50% of partner placements into law firms made by Kane and her team in the Bay Area were women.

“I was shocked that the number got up that high,” Kane said.

“There’s no question that we see an increased demand, specifically for women attorneys,” D’Eramo said.

An analysis by Bloomberg Law also shows a noticeable uptick in the number of women partners moving to new firms.

There are plenty of drivers that could be behind this growth.

“I do not think it’s a coincidence that it’s happening on the heels of the #MeToo movement,” said Kane, who noted it’s empowered women lawyers to be more assertive about their careers.

Kane added there’s also a generational component, as female millennials seem more comfortable saying, “I want more and I want better,” than women lawyers in the past.

There’s been a “cosmic shift” in recruiting, and there’s intent where there never was before when it comes to diversity, D’Eramo said.

In 2017, the Diversity Lab partnered with law firms to launch “the Mansfield Rule,” which required that women and minorities comprise at least 30% of the candidates for leadership and governance roles, equity partner promotions, and lateral positions. Clients also have called on firms to bring them teams filled with diverse attorneys.

“Before it was more of an afterthought of the conversation,” D’Eramo said. “It came at the tail end of a meeting and now it’s core to the conversation.”
Pam Miller, head of O’Melveny & Myers’ lateral hiring, said there’s been an increased demand for diverse teams from the firms’ core clients and clients are becoming more and more sophisticated in how they evaluate diversity.

In the past, clients would simply ask for numbers or percentages of “diverse” lawyers working on a matter and law firms could manipulate those statistics. Now, Miller said, clients are asking more probing questions such as who’s leading the team, and what is the racial and gender makeup of the group.

One result, according to Miller, has been that firms need female and minority senior partners that can lead these teams for clients, which has prompted them to seek women hires with experience, including on the lateral partner level.

Women may feel more inclined to take a leap because at least at some firms, there’s an increasing effort to give them a solid plan for how to integrate with the firm and its clients.

Miller said O’Melveny’s approach includes drafting an integration plan for that candidate that details everything from the mundane, like when to put out a press release publicly announcing a move, to the more complex, like how and when client introductions will be made.

“We do that initially because I know from being a lateral and we know from the market that the thing that kills laterals or causes laterals to fail more than anything is a lack of integration,” Miller said.

The integration and demonstration of a commitment resonates with candidates who are more risk averse, which historically speaking, has generally been diverse candidates, she said.

Starting Over a Challenge

Despite the progress made, there are still factors holding women back in the lateral market, as well as larger systemic weaknesses in a profession that has long struggled with diversity.

Reasons that D’Eramo has heard for women declining to move have ranged from work-life balance considerations to loyalty to their previous firm.

“They also tend to say that they’re reluctant to go to another firm just to start over and prove themselves again and give up a certain amount of sweat equity,” D’Eramo said.

Another enduring challenge for potential women laterals is accumulating a large enough book of business to be an appealing hire in an industry that’s still often viewed as a boy’s club, a feat that requires overcoming gender biases.

He said that although laterals matter, they alone are not enough. The fact remains, he said, that there are too few women partners in the profession.

“If all we’re doing is mixing up the playing field and we are putting more of the women at a handful of firms, we haven’t really solved anything from an industry standpoint,” he said.

According to a recent study by the National Association of Women Lawyers, women made up about 47% of associates, but only 30% of nonequity partners and 20% of all equity partners.

Insolia said that in order to ensure diversity, firms need to become more inclusive by, among other things, focusing on women attorneys when they are first year associates and disrupting the tendency of male partners passing on client relationships to male attorneys.

The potential effects of an economic downturn on the lateral market could be another systemic factor.

“While I have no doubt that firms will remain committed to these efforts moving forward, the current crisis is forcing firms to put a heavier emphasis on the immediate economics of a hire and on a quick path to growth, no matter how the candidate identifies,” said D’Eramo.

Still, those involved in the lateral market are enthused by what they’ve seen in the past few years, and how it’s prompted more candid conversations about gender and law firm hiring.

“There’s a snowball effect in my mind that comes with women starting to move, it’s waking firms up to the fact that they’re not just going to sit around,” Kane said.