Conservative entry-level hiring practices that bolstered Big Law firms after the Great Recession constrain them now as they struggle to find associates for the mountains of work after pandemic shutdowns.

Am Law 200 firms have hired more than 8,500 associates this year through Aug. 20, a 24% increase over the previous three-year average, according to data from Decipher, which provides lateral hiring due diligence services for law firms.

Hiring such a large group forced some firms to relax credential requirements and take on attorneys from small competitors in markets that might not have received a second look in less desperate times.

“Firms are all the sudden open to those associates if they have any of the requisite experience,” said Summer Eberhard, managing director at legal recruiter Major Lindsey & Africa. “Their open-mindedness is looking beyond law school grades to, ‘Are you somebody that can come in and get ramped up?’”

The hiring spree underscores Big Law’s hesitancy to overhaul decades-old approaches within firms that would help avoid boom-and-bust cycles in recruiting new attorneys. These approaches, which benefit firms in slow economies, cause supply-chain flaws in robust periods—particularly at the midlevel tier.

“It’s quite a difficult structural problem,” said William Henderson, professor with the Indiana University Maurer School of Law. “We’ve got a lot of a high pay, but we don’t have a lot of thoughtful training or investment in culture.”

Firms are structured in a pyramid shape, with lawyers at the bottom weeded out to leave few partners at the top, said James Leipold, executive director of the National Association for Law Placement, which advises the industry on hiring practices.

In part because of a reluctance to bring on first-year talent, which can’t necessarily be billed out to clients, firms have had to turn to the lateral market to try and grow their midlevel pool, he said. “But that’s a zero-sum game.”

The pandemic re-opening spurred growth in areas that law firms could not have predicted, Eberhard said. Purely from a numbers perspective, there’s not enough people available at the pedigree that firms have traditionally demanded to fill seats, she said.

Kirkland & Ellis has made roughly 200 associate hires through the first two quarters of 2021, making it one of the top lateral destinations for associates in Big Law, according to data by Decipher and Firm Prospects.

More than 63% of those Kirkland hires have come from a law school outside the top 14, the traditional recruitment grounds for Big Law, according to an analysis of the data provided by Decipher. By comparison, over the first half of 2020 and 2019, associates outside the top 14 made up roughly 50% and 45%, respectively, of Kirkland’s lateral hiring classes.

Cooley, also among top firms for lateral hires, has brought on attorneys with pedigrees outside the top 14 for roughly 48% of its associate hires in the first half of this year, compared to roughly 35% and 34% in 2020 and 2019, according to Decipher.

For some clients, pedigree isn’t that big of a deal, said Joseph Moreno, general counsel at SAP National Security Services. If a lawyer is working for a good firm, the assumption is that they’ve been vetted and trained, he said.

“It’s a welcome development that firms and companies are putting less focus on the pedigree of an applicant’s law school and more on their accomplishments,” Moreno said. “I’m hoping that will continue.” 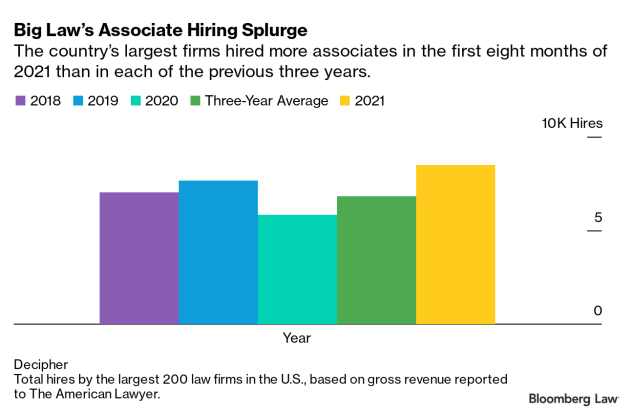 “Nobody is stepping back and looking at this thing from just a supply chain perspective,” he said. More firms need to create systems like Cravath, Swaine & Moore did that take the long view of developing human capital and ensure that it has a more consistent way to meet demands, he said.

Big Law’s war for talent can be traced back to the 1980s when Chicago law firms decided that they wanted to meet the New York standard of pay, Henderson said. It flared again at the end of the 1990s during the Silicon Valley boom that bumped entry level salaries up to $125,000 from $95,000.

Firms made money on due diligence, commodities work, and throwing bodies of expensive associates at client needs, he said. “It reached its all-time apex in 2007, when you could basically put a bunch of first- and second-year associates on eDiscovery work and bill them at rack rates.”

Over time, however, clients got wind of firms’ approach and started developing billing guidelines with strict limits on the use of first- or second-year lawyers, Henderson said. Firms responded by hiring fewer associates, he said. There were also advancements in technology over the years that automated entry level tasks that contributed to the reduction in hiring.

Then came the Great Recession where firms simply had too many lawyers and laid off about 9% of associates in the U.S. over a 15-month period, Leipold said.

Firms stayed with conservative hiring practices over the last decade, which situated them well for the Covid-related slowdowns in early 2020, Leipold said. But with the pent-up demand for legal services as businesses re-opened following the shutdown, firms didn’t have enough bodies on hand.

“So you’ve got first- and second-year associates that may not be at the same level as their peers of prior years, which means there’s a huge premium on third-, fourth-, fifth-year associates,” he said.

So where does Big Law go from here and how could it potentially fix its associate supply chain problem?

Moving outside of the traditional hiring criteria has been one strategy. Another possible remedy is to turn to hiring third-year law students. Though firms’ second-year law student summer programs were their main feeder for entry level talent, many in the early 2000s hired third years, said Mark Weber, assistant dean for career services at Harvard Law School.

Post-recession, the second-year program became the exclusive means for entry-level hiring, Weber said. “There’s no reason why that can’t change.”

And some firms have already acted. Ropes & Gray, also among the top firms for lateral hires in 2021, noted in a recent Instagram post that it’s looking for 2022 incoming associates to join its corporate practice groups, including the private equity, finance, capital markets, and M&A teams. 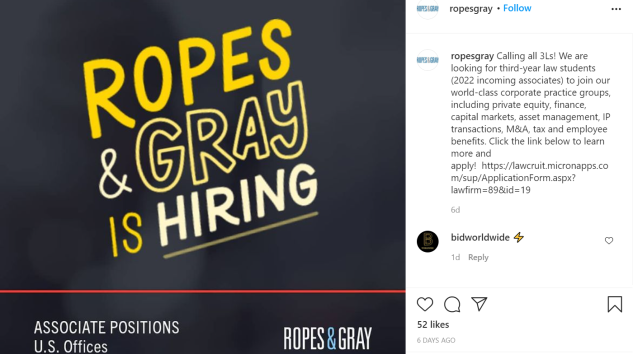 There also needs to be more sponsors for talent in the firm, said Sonia Zeledón, associate general counsel and head of ethics, compliance, and data privacy at The Hershey Company and former Skadden Arps Slate Meagher & Flom lawyer.

“There’s plenty of mentorship but not enough sponsorships, someone who really cares about this associate’s career growth, includes them in top cases, maybe even gives them origination credit, teaches them business development,” she said.

But firms face a difficult management and leadership problem in finding the right size, culture and work-life balance, as well as reducing the emphasis on money to create better teams, Henderson said.

“The idea that you’re going to look up from your client work to retool a talent model, it’s just unrealistic,” he said. “It’s not going to happen and we’re kind of trapped in this collective action model.”

To contact the reporter on this story: in New York at mtribe@bloomberglaw.com;
in Washington, D.C. at rchen@bloombergindustry.com