Not a single white male made the list composed entirely of women and people of color and more than a third served as public defenders.

Yet Biden also chose four former federal prosecutors and several law firm partners, including Regina Rodriguez, who progressive groups had resisted as being of the traditional mold they want to avoid.

Progressive activists stayed mostly positive while hinting at disappointment that more of the nominees didn’t come from non-traditional backgrounds in public interest law and criminal defense.

“Ideally all the nominees in this first wave would come from these kinds of underrepresented professional backgrounds. But old habits die hard for some senators who are used to recommending corporate lawyers and prosecutors for federal judgeships,” Brian Fallon, the co-founder and executive director of Demand Justice said in a statement on Tuesday. 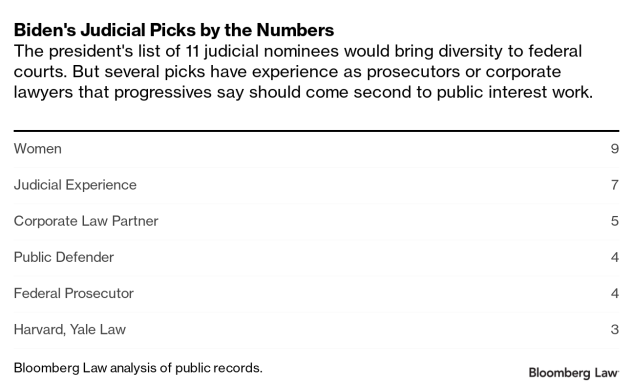 Lauren Bell, a dean and professor at Randolph-Macon College in Ashland, Virginia, who has studied judicial nominations said “progressive groups are likely to end up disappointed.”

With the exception of the Federalist Society, which played a central role in judicial nominations during the Trump administration, most outside groups find presidents don’t move the courts as far as they’d like toward their ideal direction, Bell said.

“The reality of an evenly split Senate chamber” requires Biden to consult and negotiate with lawmakers, Bell said.

Still, progressives generally praised the first nominees as a step in the right direction.

“Corporate attorneys remain alarmingly overrepresented on the federal bench, as do white men and graduates of only a small handful of law schools,” said Molly Coleman, executive director of the People’s Parity Project.

“Today’s announcement marks a critical step in changing that, but we know that there is a long road ahead in the fight to build a judiciary that works for the people, not corporate America,” Coleman said.

Biden’s list that’s most notable for its diversity is his first attempt to remake the courts after President Donald Trump spent four years stocking the federal judiciary with conservatives.

“Nominating judges who reflect America is a top priority,” Biden said in a tweet. He also noted it’s the earliest any modern president has announced so many judges this early in their tenure.

All three appeals court picks are Black women. Just eight Black women have served as appeals court judges in U.S. history, according to Federal Judicial Center data. The picks are Ketanji Brown Jackson for the D.C. Circuit, Tiffany Cunningham for the Federal Circuit, and Candace Jackson-Akiwumi for the Seventh Circuit, who would join the only all-white appeals court.

Typifying the kind of professional diversity sought by progressives is Margaret Strickland, a former state public defender who has been in private practice for a decade and served as president of the state’s criminal defense lawyers association. On her firm website, Strickland notes she obtained a $1.6 million verdict in a civil rights case against Las Cruces, New Mexico, police officers for excessive force.

Other nominees’ resumes, however, combine the sort of experiences progressives prefer with the corporate background they want to avoid.

Jackson-Akiwumi, the Seventh Circuit nominee, for example, is a partner at Zuckerman Spaeder in Washington focusing on complex civil litigation, white collar criminal defense, and investigations. But she was also previously a federal defender in the Northern District of Illinois.

That sort of mixed experience is a function of the legal profession that might involve multiple careers, said Amanda Hollis-Brusky, an associate professor of politics at Pomona College in Claremont, California, who has studied judicial nominations.

Going forward, if Democrats want diversity, “they may need to get a little more comfortable with judges who did a stint as a corporate lawyer—took the high paying job for a period of time—but have done other work,” Hollis-Brusky said.