President condemned the Supreme Court’s ruling overturning the landmark Roe v. Wade ruling that protected abortion rights nationwide, saying the justices stripped Americans of a fundamental right in place for half a century.

The president said his administration would do what it could to ensure that even in states that outlaw abortion, women retain access to the procedure. But he said voters would have to elect more Democrats to Congress in order to enact the protections of Roe into US law.

“Now with Roe gone we must be very clear: The health and life of women in this nation are now at risk,” Biden said Friday at the White House. 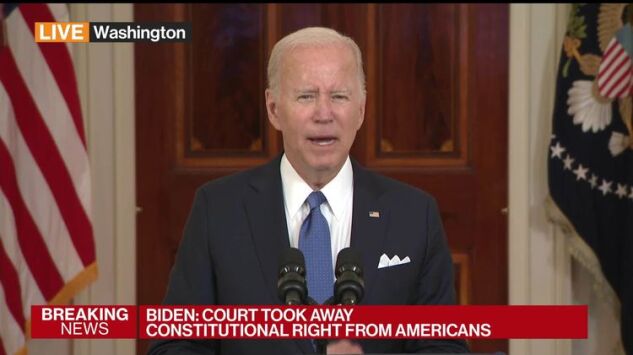 The , released shortly after 10 a.m. in Washington, wipes out the constitutional right to abortion, likely rendering the procedure illegal or at best severely restricted in half the country. Many Democratic congressional leaders and other senior figures in the party, including former President , also have decried the court’s action.

The court voted along ideological lines, 6-3, to uphold Mississippi’s abortion ban after 15 weeks of pregnancy, while going further and also voting 5-4 to explicitly overturn the 1973 Roe decision and the constitutional right it established.

“They didn’t limit it, they simply took it away,” Biden said. “And that’s never been done to a right important to so many Americans.”

Biden took no questions and the White House canceled a previously scheduled briefing by Press Secretary without explanation.

The court’s decision is a devastating blow to abortion rights-supporters and a victory for conservatives who have labored ever since it was issued to overturn the Roe decision. But the ruling also has the potential to reshape midterm elections in November, in which Democrats face stiff headwinds over inflation and Biden’s economic policies.

A majority of Americans support a general right to abortion, and polls have shown even stronger opposition to a court decision overturning Roe.

“This fall, Roe is on the ballot,” Biden said.

Biden again warned that the ruling would have impacts far beyond pregnant women, undermining constitutional protections for same-sex marriage and relationships and even the use of contraception.

Justice , in a concurring opinion to the court’s ruling, called for the justices to reconsider all of those precedents, though he said they may be protected by other provisions of the constitution.

Biden called the ruling particularly “cruel” for low-income women who won’t have the resources to travel to states where abortion isl legal.

“Eight laws banning abortion are automatically taking effect today, jeopardizing the health of millions of women,” he said. “Some without exceptions, so extreme that the women can be punished for protecting their health, so extreme that women and girls are forced to bear their rapist’s child.”

Since the Roe decision was leaked earlier this year, Democrats have urged the White House to consider policies it can adopt through executive action to protect access to abortion even in states where it’s outlawed.

Biden said Friday that the Justice Department would ensure women who live in states where abortion is outlawed can freely travel to places where it’s legal, and he said he had ordered the Health and Human Services Department to do everything it can to make sure abortion drugs “are available to the fullest extent possible.”

“My administration remains vigilant as the implications of this decision play out,” Biden said.

Legislation to codify Roe is impossible in the current Congress, and there’s little prospect of abortion-rights protections becoming US law unless Democrats achieve at least 60 seats in the Senate.

Biden has predicted that voters will revolt against Republicans and in states where new restrictions are passed.

“I know so many women are now going to face incredibly difficult situations,” Biden said. “I hear you, I support you, I stand with you.”