President Joe Biden comes off the victory of Ketanji Brown Jackson’s confirmation to the Supreme Court with a backlog of lower court vacancies that don’t have a pending nominee, including 19 circuit court seats.

Biden moved quickly to fill judicial vacancies in his first year in office but has put forward only one nomination since Justice Stephen Breyer announced plans to retire in late January. The White House must pick up the pace if it wants to fill judgeships—including two seats on the powerful D.C. federal appeals court—prior to midterm elections that could end Democrats’ narrow Senate majority.

“There certainly is another opportunity to have a year similar to 2021,” John Collins, a professor at George Washington University who focuses on judicial nominations, pointing in particular to the circuit vacancies. “But they are starting to approach the point where they’re going to lose valuable time to hold hearings if they don’t start sending more nominees forward.” 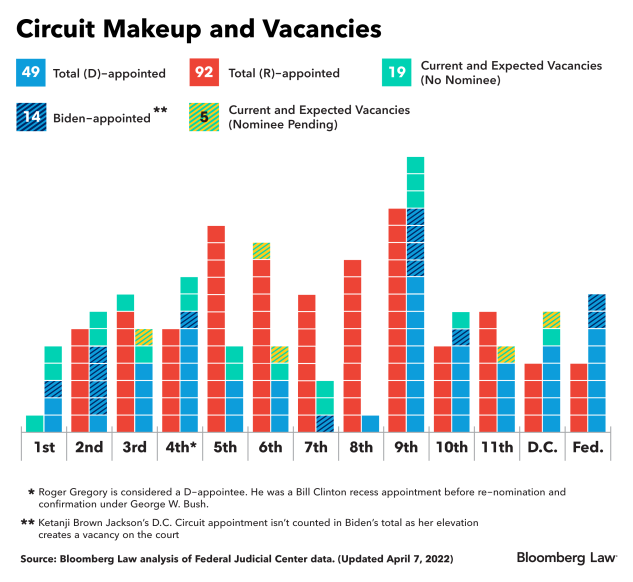 Sen. Lindsey Graham (R-S.C.) underscored what a Republican-controlled Senate would look like for Biden’s judicial nominees at Jackson’s Judiciary Committee markup, where he warned, “the process you started to go to a simple majority vote is going to rear its head here pretty soon when we’re in charge. Then we’ll talk about judges differently.”

Democrats eliminated the 60-vote requirement on executive and judicial nominations under Barack Obama after Republicans stymied nominees. Republican Donald Trump also used those procedures to his advantage to appoint three justices and reshape lower courts with younger conservatives with the help of a GOP-led Senate.

In his first 12 months, Biden outpaced every president since John F. Kennedy with his appointments, according to the Brookings Institution’s Russell Wheeler. Those nominees have been diverse in terms of gender, race and ethnicity, and professional experience.

“While we were assured repeatedly by the White House that they wouldn’t stall lower court nominations during the Supreme Court confirmation process, we’ve unfortunately seen a dearth of nominees during this time,” said Molly Coleman, executive director of People’s Parity Project, a progressive group made up of law students and early career lawyers, who added, “time is running out.”

Vetting work on lower court nominations continued in the background during Jackson’s confirmation process and new nominations can be expected in coming weeks, a White House official involved with judicial nominations who spoke on the condition of anonymity told Bloomberg Law.

The administration is looking to return to a schedule of new judicial nominee lists every few weeks with the goal of having selections in the pipeline to fill each Senate Judiciary Committee nomination hearing, the official said. Those hearings typically feature two circuit and three district court nominees.

Senate Judiciary Chair Dick Durbin (D-Ill.) said Thursday he plans to move nominees forward when senators return from the April recess. There are currently eight nominees that haven’t had a hearing.

Durbin said Majority Leader Chuck Schumer (D-Ill.) “has his hands full,” with 16 district and appeals court nominees awaiting votes on the Senate floor. Six of those nominees await the same kind of procedural discharge vote that Jackson needed to move their deadlocked nomination out of committee.

“Each of those takes up hours,” Durbin said. Schumer “understands that he has to do his best to keep up with me.”

Of the 110 current and expected district and circuit vacancies, another 86 await nominations. Openings without a nominee pending include three seats on the California-based U.S. Court of Appeals for the Ninth Circuit, two on the New Orleans-based Fifth Circuit, and a chance to shift the balance of the Philadelphia-based Third Circuit.

Among the most high-profile of Biden’s judicial vacancies is Jackson’s seat on the D.C. Circuit, the chief venue for cases involving Congress and inter-agency disputes and springboard for the Supreme Court .

Biden already has one pending nominee to that court. The nomination of District of South Carolina Judge Michelle Childs, announced in December, was paused while she was a contender to replace Breyer.

The prospect of elevating Childs to the Supreme Court got pushback from progressives for her time representing employers in disputes with employees, which creates an unusual level of scrutiny from the left heading into her hearing. That will likely come after the Senate recess in April.

Given those concerns about Childs, Coleman said she hopes the White House is looking at a nominee to replace Jackson “who’s a proven champion for working people, for economic justice, for the rights of the marginalized.”

Daniel Goldberg, legal director for the progressive judicial advocacy group Alliance for Justice, said that adding professional diversity to the D.C. Circuit for the Biden White House could lead them “to an appellate advocate or somebody with that administrative law background.” That background would be helpful given the court’s heavy administrative docket.

Deepak Gupta, a founder of boutique appellate firm Gupta Wessler, and Karla Gilbride, a senior attorney at Public Justice, were both thought to be under consideration for D.C. Circuit Judge David Tatel’s seat in September.

Biden has also faced pressure to appoint the circuit’s first Hispanic. Mexican American Legal Defense and Educational Fund forwarded the White House several possible picks for the seat before Childs’ selection and expressed disappointment after her nomination was announced.

The White House official said they understand calls from various groups, including Hispanics, for a nominee that represents a specific professional or demographic background that’s important to them on the court. The official also said they’re mindful that losing Tatel, who is blind, as an active judge means the loss a judge with a disability on the court.