The Biden administration’s aggressive timeline for vetting potential judges while seeking nominees who would bring experiential, racial, and gender diversity to the federal bench is proving difficult for several Democratic senators to meet.

She had asked senators from states with vacant district court seats to submit recommendations by Jan. 19—the day before President Joe Biden’s inauguration—and within 45 days of the announcement of a new vacancy.

“We said we couldn’t do that—that if you want a more diverse pool, and to tell people who never envisioned they could apply that they should apply, we needed more time,” said Nancy Gertner, a former federal district judge and chair of Massachusetts’ vetting commission set up by Democratic Sens. and .

The administration wants to speed the pace of nominations compared to prior Democratic presidents and make sure there’s enough time to fill what’s already grown to 100 district and circuit court vacancies before midterm elections threaten the party’s narrow Senate majority. 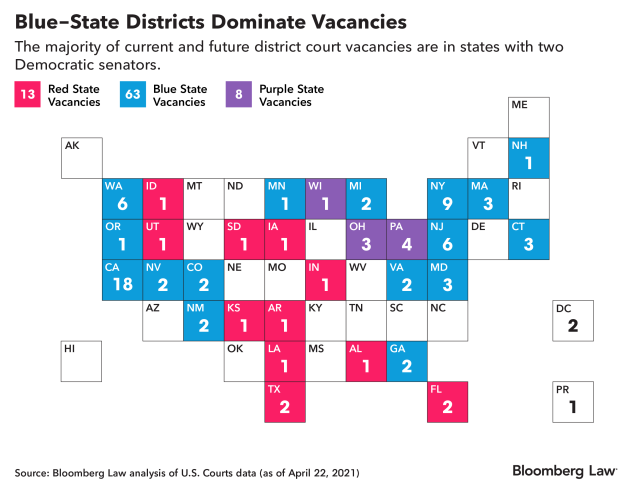 But it’s also seeking unprecedented diversity in its picks after President made more than 230 federal judicial appointments—most of them white males—during his four years in office.

The administration knows that picking from “the broadest possible pool of talented candidates takes time,” and it’s working with Democratic senators, a White House official said.

The arrival of two new Georgia senators not sworn in until Jan. 20, use of outside commissions to assess nominees, and an emphasis on a diverse slate of potential nominees all help explain why vetting is taking longer than the White House might like, said current and former Senate aides.

“We’ve got a process and our process is important,” said a Democratic aide in an office that has yet to submit candidates, who spoke anonymously to be more candid.

Despite missed deadlines from some states, Biden on March 30 announced 11 nominees for seats on the federal bench—the earliest that any modern president has announced so many judicial nominations. The Senate has yet to act on those nominations.

For each open judgeship, Remus asked senators to submit three candidates who have experience not traditionally represented on the bench, such as public defense or civil rights law.

The Massachusetts commission submitted names to Warren and Markey, but missed the White House’s Jan. 19 deadline. Two of the three Massachusetts district court vacancies were subject to that deadline.

California Sen. (D) received more than 300 applications for the 18 current and expected district court vacancies in the state. One of those seats has been unfilled for more than five years—roughly since the last time Democrats held the White House.

Feinstein and Sen. (D-Calif.), selected to replace Vice President , will use commissions to decide who to recommend, and candidates will be sent to the White House “as soon as the committees are finished,” said Adam Russell, a spokesperson for Feinstein.

Connecticut Sens. (D) and (D) also haven’t submitted names for three vacancies in their state, a spokesperson for Blumenthal said. Applications for the seats, one of which has been vacant since 2018, were due March 10.

On Feb. 3, Colorado’s senators recommended Regina Rodriguez for a district court judgeship that had been open since March 2019. While early, the nomination was still two weeks after the January deadline. President Barack Obama originally nominated her to the court in 2016, but her nomination was never advanced by the Republican-controlled Senate.

Dozens of the upper chamber’s Democrats rely on senator-appointed panels to vet picks.

“Commissions are in service of balance and diversity in all of its components and prospects, so to the extent that senators feel that those are important, I believe commissions are very valuable,” said Rebecca Love Kourlis, a former justice on the Colorado Supreme Court and former co-chair of Colorado senators’ screening commissions.

But reestablishing commissions after Democrats flipped control of both the White House and Senate takes time, said former Hill staffers who have worked on judicial nominations.

And chairing a commission is a “solid three months of work,” said Hal Haddon, a Denver attorney who chaired four of the state’s judicial advisory panels beginning in the 1970s, but isn’t involved in the latest commission.

“There may be rusty machinery that needs to be reengaged” said Ronald Weich, former chief counsel to Senate Majority Leader Harry Reid (D-Nevada) and the late Judiciary Chair Edward Kennedy (D-Mass.), and now dean of the University of Baltimore School of Law.

Continued use of the vetting panels attracted scorn from progressives, who warned they would slow the process of getting Biden’s federal judges confirmed after four years in which Trump and then-Senate Majority Leader (R-Ky.) prioritized confirming conservative judges.

With reliance on traditional commissions, “we’re going to end up right back where we started: slow to respond to this looming judicial crisis,” said Emma Steiner, co-author of a progressive report on Democrats’ use of the commissions. However, she said, “Biden’s moves have been a good step forward.”

To be sure, some senators and their commissions are meeting the timeline outlined by the White House.

In Minnesota, Sens. (D) and (D), who use a joint screening committee, sent a shortlist for a vacancy in their state in early January, an aide for Smith said. That vacancy arose in October 2019; the White House has not yet announced a nominee.

Maryland also submitted candidates before inauguration and had two nominees in Biden’s first batch of 11, a Sen. (D) spokesperson said.

In New Mexico, Sens. (D) and (D) submitted a list of candidates for two vacancies in their state before inauguration day, the two said in a joint statement. Biden said he’d nominate Margaret Strickland to fill one of the vacancies in March.

Del. (D), who represents the District of Columbia in the House, announced her recommendation just three weeks after it became public that Judge Emmet Sullivan would leave his seat on the U.S. District Court for the District of Columbia. Norton has traditionally been consulted by Democratic presidents on trial court nominations in the city.

The deadlines motivated Norton and her screening commission to put forward a name quickly, an aide said.