President Joe Biden renewed his pledge to nominate the first Black woman justice to replace Stephen Breyer, a step that could inject new lived experience into the Supreme Court and change expectations about who lands on the federal bench, advocates and scholars say.

The “overdue” nomination of the first Black woman justice “can’t help but influence the way that the law is interpreted, and to enrich and make the law make sense to whole communities who have been shut out,” said Aimee Allison, founder of She the People, a group that pushes for more political representation for women of color.

“For centuries, the Supreme Court has interpreted laws for Black women without the voice of Black women,” Allison said.

The potential nomination could be a big step toward increasing trust in the federal judiciary by infusing its ranks with a wider variety of experiences that better reflect a larger body of U.S. communities served by the courts, according to legal scholars.

The addition of similar “firsts” to the Supreme Court in the past half-century has shown how it benefits from more diverse membership outside of how cases are ultimately decided.

Biden said Thursday his pick to replace Breyer “will be the first Black woman ever nominated to the United States Supreme Court. It’s long overdue in my opinion.” Biden first made the commitment as a presidential candidate and now has the chance to act on it following Breyer’s announcement that he intends to retire at the end of the term, assuming his successor is in place.

Biden has already moved quickly to diversify the federal bench. He announced the selection of three Black women in his first batch of judicial nominees in March 2021, including Biden’s first two confirmed appellate appointees, Candace Jackson-Akiwumi and Ketanji Brown Jackson. Tiffany Cunningham, confirmed in August 2021, is the first Black judge on the Federal Circuit.

In all, Biden has nominated or appointed eight Black women to the federal circuit courts, equal to the total number who had previously been federal appeals court judges. Historically, 55 Black women had been confirmed as district judges before the Biden administration.

Jackson, 51, of the U.S. Court of Appeals for the D.C. Circuit, and California Supreme Court Justice Leondra Kruger, 45, are among those viewed as leading candidates for Breyer’s seat. 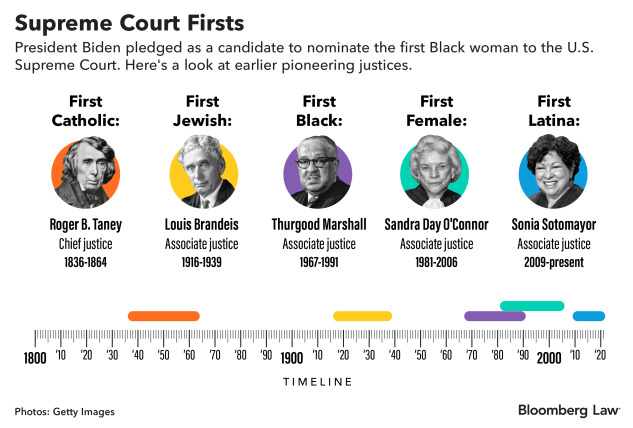 The absence of different worldviews can have tangible consequences for outcomes in court. Decisions by Black judges were overturned on appeal “up to 10 percentage points more” than rulings from their white counterparts, a trend that is reflective of persistent racial disparity in the courts, according to research by Harvard Kennedy School professor Maya Sen.

“Diversity in every sense of the word is critical to the proper functioning of a federal court,” Judge Bernice B. Donald of the U.S. Court of Appeals for the Sixth Circuit said at a March 2021 congressional hearing on judicial diversity. “A one-dimensional court cannot fully grasp the many dimensions of American life.”

Jackson-Akiwumi, who was confirmed in June 2021 as the only person of color on the U.S. Court of Appeals for the Seventh Circuit, told senators at her confirmation hearing that “demographic diversity of all types, even beyond race, plays an important role in increasing public confidence in our courts and increases the public’s ability to accept the legitimacy of court decisions.”

“It’s very akin to the way in which we guarantee a jury of one’s peers, and the idea that you walk into the courtroom and twelve people from all different backgrounds might decide your case,” she said.

“At the end of the day, the justice system should be fair and equitable,” she said. “And it’s hard to do that, if your view of what is equitable, is skewed by a lack of certain experiences.”

Both Jackson-Akiwumi and Jackson served as public defenders earlier in their careers, as did the other four federal appeals court nominees Biden selected in his first four months in office.

Prior trailblazers on the Supreme Court have forced fellow justices to confront new ways of thinking about cases.

A more diverse bench “sets a standard for their colleagues to make sure that they are broadening their own horizon and perspective,” said Lena Zwarensteyn, Fair Courts senior campaign director for the Leadership Conference on Civil and Human Rights.

Thurgood Marshall, the first Black justice who joined the court in 1967, would occasionally inject “edgy racial humor” in judicial conferences, particularly to disparage other judges who disagreed with him on racial issues, Juan Williams recounted in his biography of the justice.

Sonia Sotomayor, who became the first Latina justice in 2009, told Brooklyn Law school students in 2016 that judges with varied lived experiences “educate each other to be better listeners and better thinkers.”

She recalled a 2009 oral argument where the late Justice Ruth Bader Ginsburg pushed back on her then all-male colleagues for equating a strip-search of a middle-school girl to changing for gym class in a locker room. Their view was skewed, she said, because they had “never been a 13-year-old girl.” The search was ruled unconstitutional in an 8-1 decision.

“The value of diversity is not just in presence alone,” Donald said at the March 2021 hearing on judicial diversity. “Behind those closed doors, when we as circuit judges conference, perspective and lived experience matters. And so, there’s a rich benefit that comes from that.”

At their April confirmation hearing, both Jackson-Akiwumi and Jackson rejected the idea that race itself has anything to do with how cases are decided.

“I’m looking at the arguments, the facts, and the law, I’m methodically and intentionally setting aside personal views and any other inappropriate considerations,” Jackson said, adding that the ability to look at cases through a different lens than other colleagues is what would be valuable.

Jackson’s response came after Sen. John Cornyn (R-Texas) asked what role race should play in being a judge.

Sotomayor faced scrutiny, mainly from Republican lawmakers, for speeches she made prior to being nominated to the Supreme Court in which she said a “wise Latina woman” might reach a better conclusion based on more varied life experiences.

At her 2009 confirmation hearing, Sotomayor said her words were understood by some in a way that she never intended.

“Life experiences are important to the process of judging,” Sotomayor said. “They help you to understand and listen, but that the law requires a result, and it will command you to the facts that are relevant to the disposition of the case.”

(Updates with Biden comments on vacancy.)