Democrats grilled U.S. Supreme Court nominee about abortion rights, health-care law, guns and election disputes but ended a marathon day of testimony having made little progress derailing her likely Senate confirmation and a strengthened conservative majority on the court.

Barrett refused to say Tuesday whether she would disqualify herself from impending presidential election disputes. She offered no hints on how she would vote should the court reconsider Roe v. Wade, although she said she doesn’t consider that landmark abortion-rights ruling a “super-precedent” that would be unthinkable to overturn.

In the second day of her Senate Judiciary Committee hearings, Barrett also parried questions on gun rights, the general fate of longstanding Supreme Court precedents and the Affordable Care Act.

Currently a federal appeals court judge, Barrett told senators she made no promises to President about how she would vote on an ACA case the Supreme Court will hear a week after Election Day. She said her previous criticisms of rulings backing the law, also known as Obamacare, weren’t pertinent to the latest case. Trump is urging the Supreme Court to invalidate the law, an outcome that almost certainly would require her vote. 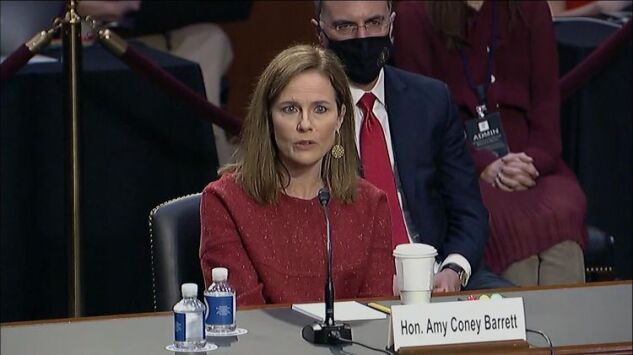 WATCH: U.S. Supreme Court nominee Amy Coney Barrett says she is “not hostile to the ACA, I’m not hostile to any statutes you have.”
Source: Bloomberg)

“I have had no conversations with the president or any of his staff on how I might rule in that case,” Barrett said. “It would be a gross violation of judicial independence for me to make a such a commitment or for me to be asked about that case and how I would rule.”

Democrats may not be able to achieve much more than aiming pointed questions at Barrett -- and hoping their skepticism will resonate with voters -- since Senate Republicans have the numbers and the determination to confirm her before the Nov. 3 election.

Barrett declined to answer questions on some issues she has expressed personal opinions on in the past, such as abortion rights, or on what she would do regarding other matters likely to come before the Supreme Court.

In defending her reluctance to reveal more about the kind of justice she’d be, she invoked the late Ruth Bader Ginsburg, whose seat she would fill.

“Justice Ginsburg, with her characteristic pithiness, used this to describe how a nominee should comport herself at a hearing: ‘no hints, no previews, no forecasts,’” Barrett said.

Ginsburg’s Sept. 18 death silenced one of court’s leading liberal voices. Some Democratic senators said Barrett would be an unworthy successor. “You would be the polar opposite of Justice Ginsburg,” said Democratic Senator Amy Klobuchar of Minnesota. Senator Kamala Harris of California, the Democratic nominee for vice president, told Barrett that Ginsburg “was much more forthcoming at her confirmation hearing about the essential rights of women.”

Barrett maintained a calm and even-handed demeanor as she faced questions on hot-button issues. She parried calls to disqualify herself from election disputes because of Trump’s public statements to the effect that he wanted to have her seated on the court before the vote for that purpose.

“I commit to you to fully and faithfully applying the law of recusal, and part of that law is to consider any appearance questions,” Barrett said. “But I can’t offer a legal conclusion right now about the outcome of the decision I would reach.”

Democratic Senator of Vermont called that a “boilerplate response.”

Later, Barrett said, “I certainly hope that all members of the committee have more confidence in my integrity than to think that I would allow myself to be used as a pawn to decide this election for the American people.”

At various points Barrett brought in her large and diverse family, as when Democratic Senator asked how she was affected by the video of the May killing of George Floyd, a Black man, at the hands of a white Minneapolis police officer.

Barrett, who is raising seven children, said she watched with her adopted Haitian daughter, Vivian. She said they cried together. Barrett said she considered the risks of police violence and discrimination to her Haitian adopted son, John Peter, or to any son Vivian might have.

“Given that I have two Black children, that was very, very personal for my family,” she said. 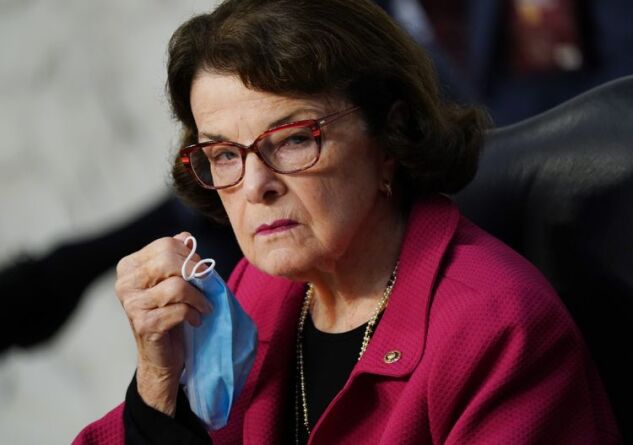 The committee’s top Democrat, , began her questioning by relaying details about women in the 1950s who had dangerous procedures and sometimes harmed themselves to end pregnancies because abortion was illegal. Feinstein pressed Barrett, a devout Catholic, about whether she would uphold reproductive-rights precedents including Roe v. Wade, which legalized abortion in all 50 states but permitted restrictions in the second and third trimesters. Barrett’s mentor, the late Justice , was critical of the ruling.

“Do you agree with Justice Scalia’s view that Roe was wrongly decided?” Feinstein asked.

“I completely understand why you are asking the question, but again I can’t pre-commit or say yes, I’m going in with some agenda, because I’m not. I don’t have an agenda,” Barrett replied. “I have an agenda to stick to the rule of law and decide cases as they come.”

She said Roe wasn’t one of the few cases, including Brown v. Board of Education, that she and other academics have labeled “super-precedents.” Such a ruling, she said, is “so well-established that it would be unthinkable that it would ever be overruled.” In a 2013 law review article, she listed seven super-precedents, the most recent of which was decided in 1961.

Senate Judiciary Chairman , the South Carolina Republican, said Democratic arguments about Obamacare were misplaced in a discussion about the proper role of a judge. Graham said the ACA had been “a disaster for the state of South Carolina.”

When Obamacare cleared Congress in 2010, there was no Republican support for it. A GOP effort to repeal the health care law failed in the Senate in 2017. Republicans who control the chamber have never passed an alternative.

Barrett tried to distance herself from her past criticism of Chief Justice John Roberts’s reasoning in the 2012 opinion that upheld the core of the ACA. That opinion upheld the so-called individual mandate, which required people to either buy insurance or pay a tax penalty. Roberts said the provision was a constitutional use of Congress’s taxing power because it was “fairly possible” to construe it as imposing a tax.

In a 2017 law review article, Barrett said Roberts in that case “pushed the Affordable Care Act beyond its plausible meaning to save the statute.” But on Tuesday, Barrett said her critique was “consistent with the way the chief justice described” his own opinion.

Barrett, who also once criticized a separate 2015 Supreme Court decision backing the ACA, said her previous comments weren’t pertinent to the case the court will hear on Nov. 10. A key issue in the latest case is whether the court should throw out the entire law if it decides the individual mandate, which no longer includes the tax penalty, is unconstitutional. She said she wasn’t aware of ever discussing that issue, known to lawyers as “severability.”

Leahy said there is real concern that Barrett would vote to invalidate the health law, noting that Trump has repeatedly said he would only nominate people to the high court who would do so.

“I do believe that the president selected you because he wanted someone with your philosophy and he had a reason,” he said.

Barrett refused to say whether she agreed with Scalia that the Constitution doesn’t guarantee the right to same-sex marriage. The Supreme Court legalized gay marriage nationwide in 2015.

Allegations of playing politics with the nomination have come from both political parties, with Democrats arguing that Trump is rushing Barrett’s confirmation through only weeks before the American public decides on his re-election. Polls show the public favors leaving the nomination to the victor of the election.

Democrats say Ginsburg’s replacement shouldn’t be named until after the election, when voters decide whether to give Trump a second term.

Graham said the 48-year-old Barrett is well qualified for the Supreme Court, after three years as a Circuit Court judge and years teaching at Notre Dame Law School in South Bend, Indiana.

Under questioning from Feinstein, Barrett said the constitutional right to bear arms, as laid out in a landmark 2008 Supreme Court ruling, is not “absolute.” That ruling “leaves room for gun regulations, and that’s why there has been a lot of litigation in the lower courts,” Barrett said.

Barrett also said that “governments are free to keep guns out of the hands of the dangerous, so for example, the mentally ill, others who would be likely to misuse guns.” That’s a position she took in a 2019 opinion that also said people who aren’t dangerous have a right to own a gun even if have been convicted of a felony.

Durbin faulted that opinion for suggesting that convicted felons might retain constitutional gun rights but not their voting rights. The case involved Rickey Kanter of Wisconsin, who had pleaded guilty to mail fraud.

“I don’t get it,” Durbin said. “You’re saying that a felony should not disqualify Rickey from buying an AK47 but using a felony conviction in someone’s past to deny them the right to vote is all right?”

Barrett responded that the Constitution lets states deprive felons of the right to vote.

“It’s expressed in the constitutional text,” she said. “But I expressed no view on whether that was a good idea, whether states should do that. And I didn’t explore in that opinion because it was completely irrelevant to it what limits if any there might be on a state’s ability to curtail felon voting rights.”

All senators on the committee will have a chance to question Barrett over the next two days.

Leahy asked Barrett if she agrees with a group that sponsored a two-page ad in the South Bend Tribune related to abortion and in vitro fertilization. She signed her name to a page that stated that “the right to life” begins at fertilization.

She said she wasn’t aware that the group that sponsored the ad has taken a strong position against in vitro fertilization and did not sign off on a second page of the ad. That second page said Roe v. Wade is “barbaric.”

“I’ve never expressed a view on it,” she said of in vitro fertilization, adding she can’t take policy positions related to cases.

Graham says he will have the committee vote on whether to advance her nomination to the full Senate on Oct. 22. Senate Majority Leader says he will move the confirmation to the Senate floor soon after that.