Attorney General has authorized Justice Department officials to open inquiries into potential irregularities in the presidential election, while acknowledging there’s no conclusive evidence.

Barr issued a memo on Monday evening allowing U.S. attorneys across the country, as well as his top lieutenants, to “pursue substantial allegations of voting and vote tabulation irregularities prior to the certification of elections in your jurisdictions in certain cases.”

“While serious allegations should be handled with great care, specious, speculative, fanciful or far-fetched claims should not be a basis for initiating federal inquiries,” Barr wrote. “Nothing here should be taken as any indication that the department has concluded that voting irregularities have impacted the outcome of any election.”

After the memo was released, Richard Pilger, who led the Justice Department’s Election Crimes branch, resigned from that post on Monday night. 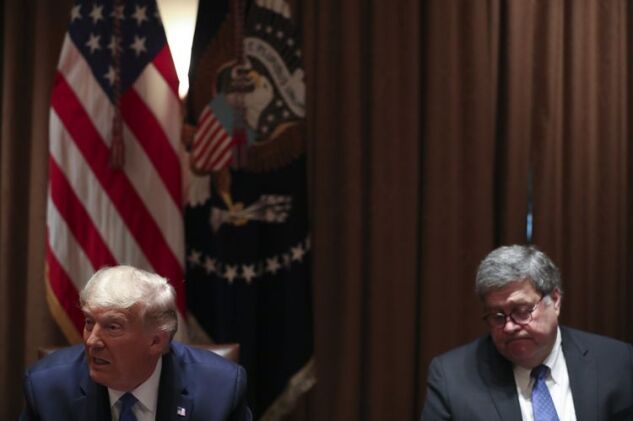 His decision was reported by the New York Times and confirmed by his email announcing it, which was tweeted out by , who headed the department’s civil rights division under President

In the email, Pilger said he was stepping down because Barr’s new policy “abrogated the forty-year-old non-interference policy for ballot fraud investigations in the period prior to elections becoming certified an uncontested.”

Barr has been one of the most ardent and aggressive supporters of President , and his message comes as Trump and his legal team make so far unsubstantiated claims of widespread voter fraud.

A Justice Department official said that neither Trump nor anyone at the White House had asked Barr to take the action, although some Republican lawmakers have urged him to intervene.

Before the election, Barr had echoed Trump’s unsupported claims that widespread use of mail-in ballots was subject to fraud, including ballots that might be cast by foreign adversaries seeking to influence the election. But the attorney general had remained silent in the days just before and after last week’s election, until now.

, a top lawyer for the Biden campaign, responded in a statement that “it is deeply unfortunate that the Attorney General Barr chose to issue a memorandum that will only fuel the ‘specious, speculative, fanciful or far-fetched claims’ he professes to guard against. Those are the very kind of claims that the president and his lawyers are making unsuccessfully every day, as their lawsuits are laughed out of one court after another.”

Barr indicated that in authorizing the inquiries he broke with department policies, which he said require consultation with the agency’s public integrity officials in some instances.

He argued that time was of the essence, as those officials generally counsel that overt investigative steps shouldn’t be taken until the election outcome has been concluded.

That’s “never been a hard and fast rule,” he said, and “such a passive and delayed enforcement approach can result in situations in which election misconduct cannot realistically be rectified.”

Barr said it “will likely be prudent to commence any election-related matters as a preliminary inquiry, so as to assess whether available evidence warrants further investigative steps.”

After his announcement, Gupta tweeted: “Let’s be clear -- this is about disruption, disinformation, and sowing chaos.”

“Trump is furious, demanding all ‘his’ lawyers take action,” she wrote. “They have no evidence so they’ll push the PR. Doesn’t change the result.”

Earlier Monday, Barr met with Senate Majority Leader at the Capitol. Barr left without making any comments to reporters when asked what they had discussed and whether it pertained to election inquiries.

”We have the system in place to consider concerns, and President Trump is 100% within his rights to look to allegations of irregularities and weigh his legal options,” McConnell said.

The Justice Department official declined to say if Barr discussed his plan to allow voting probes with McConnell.

Trump’s campaign has filed a flurry of legal challenges to vote counts in battleground states after projections by the Associated Press and all the major television networks showed that Democrat has won.

Several of the lawsuits allege that the Trump campaign wasn’t given sufficient access or a close enough view to monitor vote counting and catch any fraudulent ballots.

Democrats have called the lawsuits baseless efforts to muddy the election outcome. Throughout the campaign, Trump claimed without evidence that the increased use of mailed-in ballots because of the pandemic would lead to widespread voter fraud and suggested the election would have to be decided in the U.S. Supreme Court.