Aspiring lawyers experiencing heightened emotional distress during the pandemic may not seek treatment over fears about mental health questions on bar applications, say advocates who want states to eliminate the language.

A quarter of students seeking graduate and professional degrees, a number that includes those in law schools, screened positive for major depressive disorder, according to a pandemic-era survey. Some 17% of students reported depression in a similar analysis at 15 law schools in 2014.

“It is easy to imagine that a conceivably large number of current law students have experienced sharply increased mental health distress this year, but forgone seeking help out of concern for how it might jeopardize their admission to the bar,” said Patrick Krill, an attorney and principal and founder of Krill Strategies. “That is a lose-lose scenario and not one that our system should be fostering.”

This year, Indiana, Michigan, and New York have dropped questions on mental health from the character and fitness section of bar application, language which is still standard in most states.

“The tide is shifting, albeit more slowly than I would like, towards the recognition that the character and fitness process has been stigmatizing to many law students,” said Janet E. Stearns, dean of students at the University of Miami Law School and a leading voice on the topic.

Stearns says she hopes movement in some states in 2020 will carry forward while others suggest a generational shift in views on mental health might drive more change. This past summer, one of the nation’s youngest federal judges spoke out strongly in a case involving an attorney with bipolar disorder trying to get licensed in Kentucky. 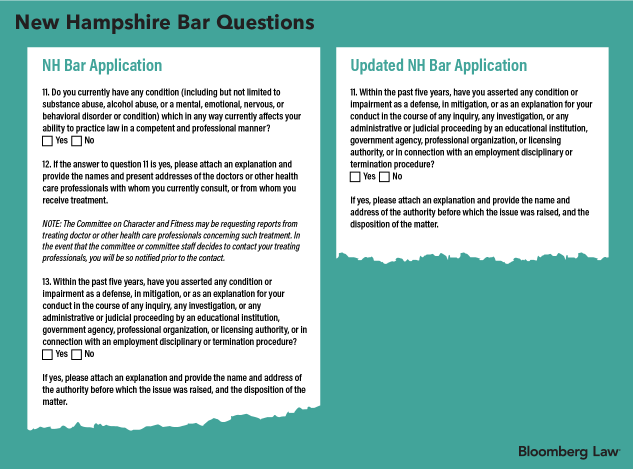 The Justice Department forced Louisiana in 2014 to stop asking questions about mental health diagnosis and treatment on bar applications. Seven states have followed suit. In addition to Michigan, New York, and Indiana, New Hampshire this past summer made its questionnaire less specific, a path taken by many other states.

California, Connecticut, Massachusetts, and Virginia are the other states that have eliminated mental health questions for bar applicants.

About 20 states use the National Conference of Bar Examiners questionnaire while the remainder offer a version of it. Character and fitness sections commonly ask about substance abuse, any arrests, problems in law school, or problems managing finances.

The mental health section of these questionnaire seek “very private information including contact information to therapist, hospital or treatment facility, without any clear limitation on what information would be released or how it would be used,” Stearns said.

These “open-ended” inquiries are intrusive and discourage students from accessing resources for their mental health, creating a “vicious cycle,” she said.

Some states still ask a variation of whether applicants have been diagnosed with or treated or sought counseling for mental conditions like bipolar disorder or schizophrenia.

A diagnosis isn’t a determinant of competency to practice, otherwise “one-third of us should be kicked out of the profession,” said Reed Smith partner Mark S. Goldstein, who has written and spoken publicly about his past struggles with depression, anxiety, and obsessive compulsive disorder.

Studies show lawyers tend to suffer disproportionately from depression and other mental health problems, and many are reluctant to acknowledge it.

Gray O’Dwyer, an attorney who petitioned the Virginia Board of Bar Examiners in 2018 to remove its mental health questions, said many states still include them because they’re out of touch.

“Those who have passed C&F tend to put it behind them and move on, those who have not are often afraid to speak up, and those making the decisions are disconnected,” said O’Dwyer, who works for the Virginia attorney general’s office.

Bloomberg Law reached out to a number of states which either declined comment or didn’t respond regarding whether they have any plans to change or the reasons for keeping the mental health questions.

A 2017 report by the National Task Force on Lawyer Well-Being said no state publishes data on bar admission denials due to conduct related to mental health disorders but it’s thought that the number is low.

In fact, the NCBE questionnaire states that treatment isn’t a basis for denying bar admission, and that agencies “routinely certify” people who show “personal responsibility and maturity” on fitness issues.

“The Conference of Bar Examiners encourages applicants who may benefit from assistance to seek it,” applicants are told in the form.

The issue received new attention in August when Judge Justin Walker, then of the Western District of Kentucky and now on the U.S. Court of Appeals for the D.C. Circuit, dressed down that state’s bar for trying to stop a woman with bipolar disorder from becoming licensed.

The woman, known as Jane Doe in the decision, had worked in Florida for years as an attorney without any problems, and said that she was treated like a “criminal” by the Kentucky bar.

Walker said the state punishes people who get help for their illness by “putting them through the ringer,” making them produce numerous, unnecessary documents. It took Doe 994 days to get barred. This deters many from getting help, he added.

Several state and federal courts have held that the Americans with Disabilities Act prohibits state bars “from unnecessarily interrogating applicants about their mental health,” said Walker.

Questions that could be considered discriminatory include asking whether a person has any disabilities, Holland said.

But it’s not just the legal profession in focus. Medical licensing boards ask about an applicant’s psychiatric history, she added.

Walker, at 38, is one of the youngest members of the federal judiciary and his opinion in the Kentucky case may be an indication of a generational shift in attitudes about mental health in the legal profession, said Krill, and Dan Lukasik, the director of workplace well-being for the Mental Health Association in Buffalo.

“We are shedding some of our unhelpful and counterproductive beliefs about how we should approach the personal and emotional well-being of lawyers,” said Krill.

Progress overall remains elusive, in part because the younger lawyers who understand how important it is to have an open mind when it comes to mental illness, aren’t the decision-makers on bar admissions, said O’Dwyer.