Stephen Bannon in the East Room of the White House on Jan. 22, 2017.
Photographer: Andrew Harrer/Bloomberg

After joined the online campaign We Build the Wall to raise private funds for the construction of a barrier along the U.S.-Mexico border, he made it clear there’d be “no deals I don’t approve.”

That’s according to an indictment unsealed in federal court on Thursday after Bannon was arrested aboard a yacht in Long Island Sound.

Later in the day, in a Lower Manhattan courtroom, the 66-year-old gadfly of the right and onetime top aide to President pleaded not guilty to charges he conspired to commit fraud and launder money in the project. A tanned Bannon, with long gray hair and wearing a white mask, was then freed on a $5 million bond. 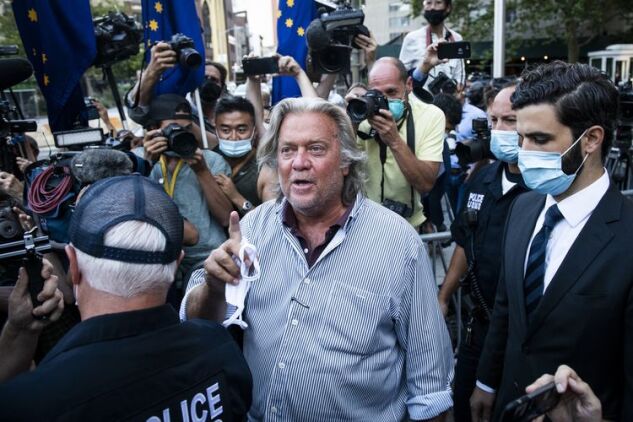 Prosecutors allege that the former White House chief strategist defrauded hundreds of thousands of donors, including some who struggled financially, by siphoning funds out of the project to cover personal expenses and pay a salary to the group’s founder, a disabled Air Force veteran named Brian Kolfage -- all despite advertising We Build the Wall as a volunteer organization and promising Kolfage would “not take a penny.” The fund raised more than $25 million, according to prosecutors, and Bannon received more than $1 million, using some of it to pay personal expenses.

His indictment came on the same morning the Trump administration to block a subpoena by the Manhattan district attorney for the president’s tax filings. It offered an unsavory portrait of a onetime close adviser to Trump exploiting a core promise of the president’s first election campaign in order to enrich himself.

The arrest marks a dramatic fall for Bannon, who became an influential voice with Breitbart News, ascended to power in Washington as an architect of Trump’s 2016 presidential campaign and went on to his short-lived career as chief strategist before falling out with the president.

After the hearing, he emerged from the courthouse holding his mask in his hand.

“This entire fiasco is to stop people who want to build the wall,” Bannon told press gathered outside, before being driven off in a black Cadillac Escalade with tinted windows.

If he is found guilty, Bannon could face as many as 20 years in prison on each of the two counts against him, although it’s rare for the maximum sentence to be imposed.

William Burck, a lawyer for Bannon, had no comment on the indictment.

Three others were charged in the alleged scheme, including Kolfage, who spent the money he received on home renovations, a luxury SUV, a golf cart, cosmetic surgery and jewelery, prosecutors say. Another is the chief executive of a Trump-themed energy-drink company in Colorado.

Long before the arrests, the wall-building effort had drawn criticism, including claims that sections were being constructed in floodplains and creating erosion. It was backed by high-profile Trump boosters like Blackwater founder and former Kansas secretary of state . once called it “private enterprise at its finest.”

Trump told reporters on Thursday that he didn’t support it because he didn’t want a privately financed border wall. The project “sounded to me like showboating,” he said, adding that the arrest was a “sad thing for Mr. Bannon.” The president tweeted last month that he thought the project was “only done to make me look bad.”

Bannon served as the chief executive of Trump’s 2016 campaign and was the ideological designer of his populist vision. He helped Trump expand his appeal among the far right -- often prompting accusations of racism and conspiracy mongering -- and was a leading proponent of the administration’s efforts to ban travel from a group of Muslim-majority countries.

But Bannon’s tenure in the White House was rocky. Opponents accused him of leaking frequently to the news media and rushing haphazard efforts to root out “deep state” opponents, while news coverage suggesting that he was using his influence to manipulate the president drew Trump’s ire. He was ousted just seven months into his role amid the over Trump’s reaction to the white supremacist protests in Charlottesville, Virginia.

We Build the Wall has completed two short sections of fencing along the border -- a one-mile section and a three-mile stretch -- filling in gaps in the existing U.S. government barricade.

As they raised the funds, the government alleges, Bannon and the others schemed to make hundreds of thousands of dollars in secret payments to Kolfage. To conceal those payments, Bannon moved the funds raised by We Build the Wall through a nonprofit he controlled before it was transferred to Kolfage, according to the indictment.

(Updates with background on Bannon’s rise in last section)