The highest grossing law firm in the world keeps increasing its army of second-class partners. It’s a brilliant business model—maybe not so much as a human model. Will other elite firms follow?

Kirkland & Ellis is cranking out new partners like doughnuts off the assembly line at Krispy Kreme. This month, it announced a batch of 151 new partners—its largest class to date—and by far the largest of any of its competitors.

But before you think that the firm is some kind of socialist utopia where the bounty is widely shared, consider this: Partnership at Kirkland is highly stratified, and non-equity partners (682) far outnumber its equity ranks (476). Though it’s commonplace for labor/employment firms to have far more non-equity than equity partners, that ratio is shocking among elite firms. For instance, at Latham & Watkins, a firm that’s often compared with Kirkland, equity partners far outrank non-equity partners (524 versus 297).

To cross over from non-equity to equity status at Kirkland, it’s a given that body and soul must be sacrificed. Call it Hunger Games 2.0. Or perhaps Squid Game is the more au courant analogy.

Under the firm’s unique system, each year over a hundred associates are tapped to be income partners after their sixth year. Then the fun begins: The chosen are given four more years to prove they deserve the real prize—equity partnership. And if they don’t make equity by that time, out the door they go. (Historically, only about 20% of its income partners eventually became equity partners, reports The American Lawyer.)

It’s either the most exploitative ploy in Big Law. Or the most transparently honest. Maybe it’s both. 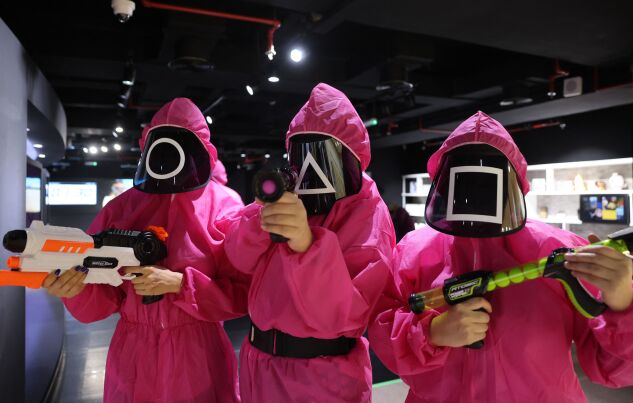 Participants take part in an event where they play the games of Netflix smash hit “Squid Game” at the Korean Cultural Centre in Abu Dhabi, on Oct. 12, 2021.
(Photo by GIUSEPPE CACACE/AFP via Getty Images)

But before I go on, let me just gripe about what I find frustrating: Kirkland’s lack of transparency about the diversity and gender breakdown of its new partner class. I’ve asked, and the firm has been stone silent. To make my job more difficult, it no longer provides photos of new partners or links to their names to help us discern ethnicity. (Granted, when it did provide photos back in 2019, I noted the dearth of Black partners in its new class.)

One thing that’s clear, though, is that Kirkland’s two-tier system is making the firm very rich. For the year ending in 2020, its revenue shot up 16% to $4.8 billion, making it the world’s highest grossing firm, according to The American Lawyer.

So here’s what intrigues me: If blow-your-socks-off financial results depend on a proletarian class of partners to support the ruling class, won’t elite firms inevitably embrace the Kirkland model? And if that’s the direction, what kind of pressures will this put on young lawyers in a profession which is already infamous for anxiety and depression?

The reality is that the traditional one-tier partnership system is already on its last breath and changing by the day. Although there are still about two handfuls of super-elite, one-tier partnership firms still standing (among them, Davis Polk, Paul Weiss, Sullivan & Cromwell, Ropes & Gray, and Cleary Gottlieb), pure one-tier firms—those elite firms with lock-step compensation systems—are practically extinct. (Cravath, Swaine & Moore, Debevoise & Plimpton, and Wachtell Lipton are among the holdouts.)

All you have to do is look at who’s going over to Kirkland to see how the one-tier, lock-step system is losing ground. Though no lateral partner ever cites money as a reason for a move, it’s no secret that Kirkland pays star hires lavishly. For instance, its glitziest hire to date is Sandra Goldstein, who was reportedly lured from Cravath in 2018 with a deal that pays her an eye-popping $11 million a year for five years. Other Cravath partners at Kirkland include M&A stars Eric Schiele, Sarkis Jebejian, and Jonathan Davis. Another hire that turned heads was corporate partner Edward Lee who joined from Wachtell Lipton Rosen & Katz last year. To round off its shopping spree for M&A talent, Kirkland recently hired M&A partner Rachael Coffey from Paul Weiss.

“Kirkland’s star model is proving very challenging to firms because you can’t retain your stars without functionally breaking the modified lockstep mode,” says William Henderson, a law professor at Indiana University’s Maurer School of Law, who studies law firm business structures. “They’re one of the few firms that has figured out how to enhance their margins by using the income partner tier,” says law firm consultant Peter Zeughauser. “They have really mastered the system,” adding that the firm deploys “their up or out discipline at all levels of the firm.”

Though some “Wall Street elites complain about the ‘Kirklandization’ of the profession,” says Henderson, skeptics now admit that the model is “sustainable.”

“They work their non-equity partners to death, then, at the end of day, bill them to death,” says a partner at a one-tier firm. “As the lateral wars rage on, a lot of firms are focused on their PPP and will increase their non-equity ranks to bump it up. Economically, it’s the smart thing to do.”

I call Kirkland’s system “Darwinian,” but both Henderson and Zueghauser describe it another way. “It’s a two-stage tournament,” explains Henderson, in which players get to “stage one in six years” which, he points out, “is vastly shorter than any other firm.” And, he adds, “stage two—an up-or-out competition for equity lasts around four years”—then it’s all over.

“Big Law lawyers are wired to compete against one another to win from their early days in school,” says Zeughauser, alluding to how they compete “to join the best firm, make partner, be the biggest rainmaker”—plus all the prizes that go with that package—“biggest house, best vacation homes.” He adds, “Life is a tournament . . . the second [non-equity] tier is just part of the tournament.”

In other words, don’t cry for those non-equity partners. “The outplacement prospects are excellent as a Kirkland partner,” says Henderson. “And the money is really good for those four years. Everyone here are consenting adults, including the clients paying the high hourly rates [for the income partners].” Zeughauser also calls the Kirkland system a “win-win.” Being an alum of Kirkland “is like getting an LLM from Harvard or Stanford–a post-graduate degree that commands enormous respect in the lateral and in-house market,” says Zeughauser.

Perhaps we don’t need to shed tears for Kirkland’s army of non-equity partners but is this truly a positive development for the profession?

Well, “I don’t think you asked me if it’s positive,” says Zeughauser, “but it is highly valuable.”

And if the Kirkland model is so efficient and profitable, won’t all elite firms eventually follow? “It’s not inevitable,” insists the partner at the one-tier firm. “We make different choices but still have incredible profits. We offer a different culture. There are no sharp elbows here. At Kirkland you make a deal with the devil.” The problem, he adds, is that there’s now a public competition among elite firms based on profit. “I think publishing PPP is pernicious.”

Pernicious or not, that genie has long left the bottle. Which raises this question: As between making an obscene amount of money and sustaining a more benevolent culture, which one do you think will prevail?