Last week, thousands of law school graduates gathered across the country to tackle one of several hurdles to becoming a licensed attorney in the US: the bar exam. The current format and process of the exam have spurred controversial discussions in recent years, which only heightened with the onset of the pandemic in 2020 and the chaos of remote testing that came with it.

Bloomberg Law’s second State of Practice survey sought to gain a better understanding of where attorney respondents stand on this hot-button issue.

The survey asked 382 law firm and in-house attorneys (who have been practicing on average for 19 years) several questions about their bar exam experiences and a more pressing question: Whether this exam actually measures lawyer competence—as it was meant to do—and properly demonstrates that a recent law grad is ready for practice. According to the survey results, the exam may not pass the test.

Bar Exam Fails Its Purpose, But Should It Change?

Sixty percent of respondents reported “no” when asked whether the bar exam measures lawyer competence—indicating that the majority of respondents feel the bar exam fails its intended purpose. The same percentage also reported that the bar exam didn’t prepare them for practice, which is quite alarming given the countless hours most devote to studying for the exam. 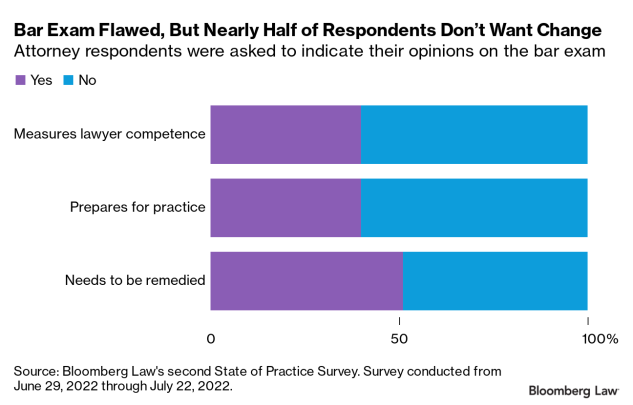 And yet, even though the majority of respondents indicated that the exam isn’t achieving its desired purpose, you’d expect about the same number to report that it also needs to be remedied. Oddly enough, only a little over half (51%) of the survey respondents indicated that the exam should be reconsidered—which is much closer to a 50/50 split than we saw with the other two options.

This begs the question as to why that might be. One possible explanation is that if most respondents took the exam a number of years ago, reforming the test may not be a huge concern to them. Another could be that because the legal profession—in general—has been regarded as resistant to change, reconsidering the exam altogether may be an alarming concept. Or perhaps the respondents just can’t think of a better option to safeguard the profession and prevent incompetent attorneys from entering the legal field.

Of those attorneys who responded that the exam needs to be remedied, the survey asked them to specify which particular areas of the test require an overhaul. The most popular selections were the Multistate Bar Examination (MBE), the cost of the exam, and the Multistate Essay Examination (MEE). Among the write-in responses to this question, the most common answers were to abolish the exam completely and to test more practical skills, as seen in the word cloud below. 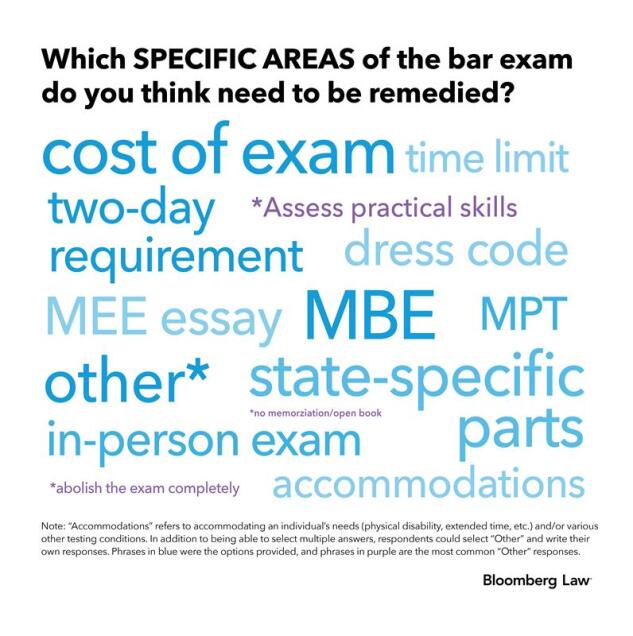 While each of these potential areas of reform are important ones that should be seriously considered by the bar examiners—including abolishing the test completely—one area of concern in particular stands out to me: the cost of the exam.

The bar exam has often been criticized for being a test about access to resources and wealth, as the cost of the exam can be a huge burden on anyone, but especially for those from lower socioeconomic backgrounds.

The financial resources that must be devoted to preparing for the exam can add up very quickly. These include study courses and preparation materials, the cost of the actual exam, and traveling for the exam if needed. In fact, it can cost up to $7,000 to cover exam fees and study courses—which is a tremendous amount for recent graduates, many of whom aren’t working and are instead studying full-time without an income for over two months.

Alternate Options for the Bar Exam

The cost of the exam is only one of its many issues, so the question becomes: Where do we go from here? Do we abolish the exam completely and try new, alternate methods? Or do we keep certain portions of the exam, such as the Multistate Performance Test (MPT), and go from there?

The National Conference of Bar Examiners (NCBE) has started to address these types of questions, and has decided to alter the current structure of the bar exam by adjusting the tested subjects, question style, and more in the coming years.

However, this new testing structure may not be generally accepted by all states, and there’s likely not a one-size-fits-all approach, especially when you consider those who would rather be rid of the exam completely. As a result, it may take some time before a universal solution is reached. Some states have already taken matters into their own hands and offer—or plan to offer—alternatives to licensure, including:

As conversations continue, it will be interesting to see which states follow suit. After all, the bar exam was created before we even had computers, and it’s likely time for the exam to make its way into the 21st century.

(Adds information on Minnesota's alternative to licensure in 13th paragraph.)