is set to tell the Texas Supreme Court Thursday that it’s not—and shouldn’t be—liable under state law for a toddler’s battery-ingestion injury, allegedly stemming from a product bought on the company’s web marketplace.

Whether Amazon is a “seller” of third parties’ marketplace products where it doesn’t hold title to them, but stores and ships them in fulfilling the order, is the question before the state high court.

Amazon’s business model is new, and prior Texas cases aren’t on point, the U.S. Court of Appeals for the Fifth Circuit said when it sent the question to the supreme court.

The case is among the last in a series of high-profile appeals on the “seller” liability issue, which differs by state. A California appeals court decided in August 2020 that Amazon is potentially liable in a case where it stored and shipped an allegedly defective battery under a “Fulfillment by Amazon,” or FBA, arrangement with the seller. And another appellate panel there recently heard argument in a non-FBA injury case. 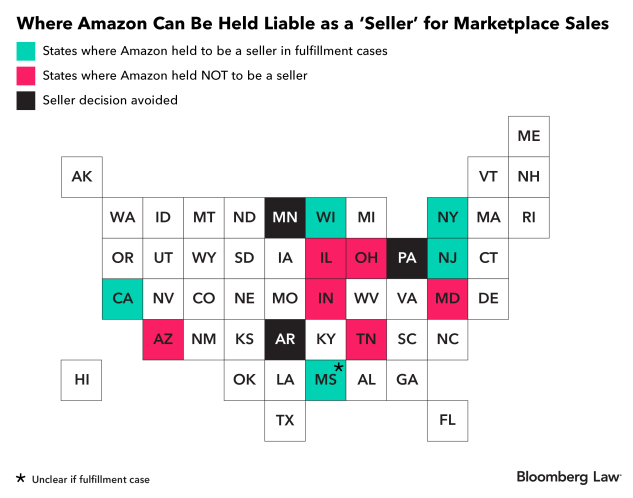 Here, Morgan McMillan alleges her daughter ingested a remote-control battery as a toddler. The remote’s China-based maker didn’t even try to comply with industry standards, McMillan alleges. Third-party merchant Hu Xi Jie, who did business as USA Shopping, isn’t subject to jurisdiction in Texas, she said in a filing.

A federal district court allowed McMillan to proceed with claims against Amazon on behalf of herself and her daughter, and the company appealed.

Both Amazon and McMillan argue in briefs to the high court, as they did to the Fifth Circuit, that the other side’s position represents an expansion of Texas product liability law.

Both double down on their arguments about Texas precedents, even though Judge Don Willett of the Fifth Circuit, who used to be a Texas Supreme Court justice, said “there are no on-point Texas cases to guide us.”

“Our only guides in this case are a broad statutory definition of ‘seller’ and fact-specific caselaw involving dissimilar marketplace mechanics,” Willett said for the panel when he sent the question to the justices.

The parties also invoke public policy. Empirical evidence doesn’t show that even conventional strict liability for “direct members of the chain of distribution” has much of an effect on product safety, Amazon argued in its brief. And spreading potential losses to “service providers like marketplaces” wouldn’t be efficient or fair.

“Spreading losses to innocent entities to compensate a different buyer is essentially a judicially imposed insurance system,” it said.

But McMillan said Amazon’s policy argument “is only more evidence of this giant corporation’s selfish efforts to dominate and crush the competition, while ignoring the basic safety needs of Texas consumers.”

“Amazon can protect the public and minimize its own risk and exposure by simply holding its vendors accountable” under Texas law and its own contracts with them, she said.

Amazon has had mixed results in fighting off seller liability. Courts applying the law of six states, including the Ohio Supreme Court and three federal appeals courts, have held it’s not a seller. Besides Ohio, the states are Maryland, Tennessee, Arizona, Illinois, and Indiana.

Meanwhile, the California Court of Appeal and federal district courts in New Jersey, Mississippi, and Wisconsin have allowed claims to proceed, mostly in FBA cases. A New York trial court recently went the same way, in contrast to an earlier federal court decision in the state.

And in a few instances, in Pennsylvania, Minnesota, and Arkansas, Amazon has settled or resolved cases before the issue was decided.

To contact the reporter on this story: in Washington at mbarash@bloomberglaw.com