North Carolina, Texas, and Virginia are the latest states to face lawsuits claiming that their mail-in voting procedures discriminate against visually impaired citizens.

The National Federation of the Blind and other disability advocacy groups have filed lawsuits against several states over the past few months claiming that their absentee voting systems—which are set to be used on a large scale because of the coronavirus pandemic—violate the Americans with Disabilities Act. The three most recent were filed within the past week.

Fewer than a dozen states provide accessible absentee or mail-in voting, according to NFB spokesman Chris Danielsen. He said his group mailed a letter in September to all the states with inaccessible systems, but the pandemic has made the issue more urgent.

“If it is unsafe for non-disabled voters to vote in-person and state officials are encouraging them to stay home, then the same logic applies to blind and disabled voters and states must afford us an equal opportunity to vote safely, privately, and independently from our homes,” Danielsen said.

Mail-in voting, which is likely to increase significantly in the November elections, requires the use of a paper ballot. That presents unique challenges for blind citizens and other people with disabilities. 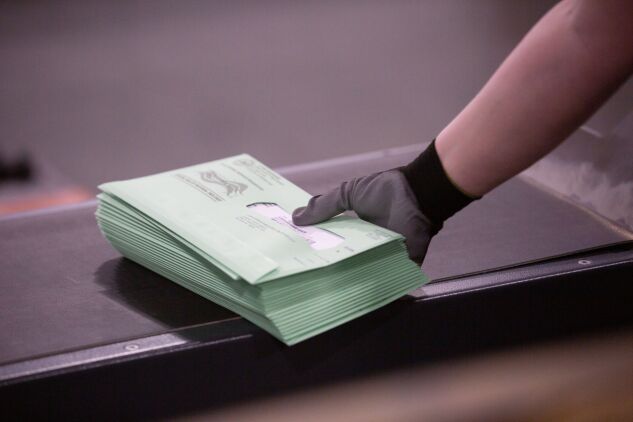 Advocates for the blind are suing states for discrimination regarding mail-in ballots.
Photo by Caitlin O’Hara/Bloomberg

Advocates say states that only use paper mail-in ballots for absentee voting are unfair to visually impaired people and other citizens that otherwise can’t fill them out by themselves. They argue in the litigation that those voters are forced to either choose to risk voting in person or have someone else fill out their ballot and give up their right to vote privately and independently.

More than 7.2 million people in the United States aged 16 or older had a visual disability as of 2016, according to Danielsen. Many other citizens have other sensory or physical conditions that prevent them from being able to mark a paper ballot, he said.

Some states have settled litigation against them by adjusting their systems to allow for more accessible remote voting or by agreeing to explore ways to do so in future elections.

Florida recently reached a deal with advocacy groups to pilot test a remote voting technology with an aim to make it available statewide in 2022. Delaware reactivated its accessible absentee voting program for the presidential primary in July after being contacted by advocacy groups over the issue.

New York and Pennsylvania put temporary solutions in place for primary elections because of lawsuits filed against them, but the litigation is still pending as more permanent fixes are sought, according to Danielsen. “Michigan also agreed to a solution but has so far failed to live up to its agreement, and we have a motion pending for contempt of court because of that failure,” he said.

Danielsen said Maryland has had an accessible solution in place since 2014 and offers it for free to any state that wants to use it.

“States have had plenty of notice and time, pre-pandemic, to work with the National Federation of the Blind and other advocates to resolve this issue,” he said.

To contact the editors responsible for this story: at ktrygstad@bgov.com; at mmali@bloombergindustry.com