Judge Yvette McGee Brown (ret.), the first Black woman to serve on the Ohio Supreme Court, and now a partner at Jones Day, reflects on her journey and the challenges Ketanji Brown Jackson is likely to face if confirmed.

What will it mean to be the first Black woman justice on the U.S. Supreme Court? The day her name is announced, she becomes a major public figure. The bright lights of news cameras and cell phones will be ubiquitous along with probing questions—some fair and some not.

Despite her record of demonstrated achievement and intellectual rigor, she will be attacked; every decision she’s ever written will be analyzed to attempt to pigeonhole her as progressive or conservative. It is correct as some will say, that this happens with every nominee to the high court.

However, this particular justice is stepping into history at a time when the country feels unsettled and acts of overt racism are on the rise. The intense scrutiny may minimize the historic achievement we have all been waiting for. I hope that in the midst of all that will come at her, we will take the time to reflect, embrace, and respect the path to history she is now on.

In reflecting on taking my own nascent steps into a place in judicial history, I recall when former Ohio Gov. Ted Strickland (D) talked with me in late 2010 about being the first Black woman on the Ohio Supreme Court and the first person of color in 37 years.

I was reluctant at first, not sure I wanted to jump into that spotlight, or if I would enjoy the work of being a justice, especially since I would be the only Democrat on a seven-member court. Fortunately, my husband and close friends encouraged me to think deeply about this opportunity. My term started Jan. 1, 2011.

I am a product of Ohio public schools. I was born to a teenage mother, my father was not present in my life and my mother had two children after me. No social scientist would have predicted that child, born to a poor, Black teenage mother would one day sit on the Ohio Supreme Court. 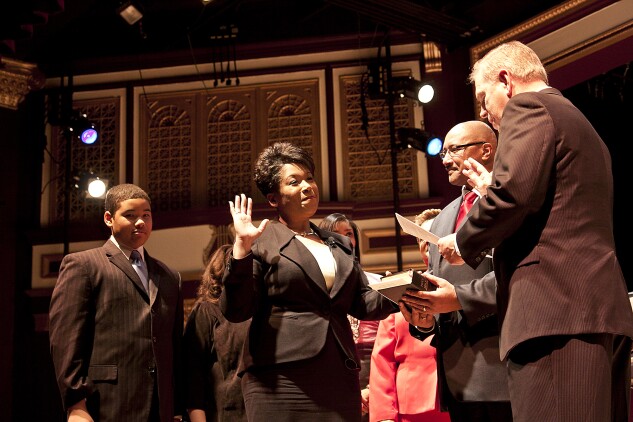 My lived experience made a difference in how we discussed cases. There were many times, particularly when we discussed criminal cases, where my lived experience added a depth of analysis to the issues. It didn’t change the law we had to apply, but it did require more thoughtful consideration of the issues raised—a more thorough analysis rather than a mere acceptance of the government’s position.

If you have never had a negative encounter with law enforcement or had a family member falsely accused, or been stopped because of the neighborhood you’re in, you may find it easier to dismiss allegations of prosecutorial misconduct or government overreach.

This is not to suggest that every Black person has someone in their family who has had a negative encounter with law enforcement. It is to state, however, that how Black people experience the world is different and that frame of reference needs to be in the room where legal rulings are being made.

The significance of this SCOTUS nomination cannot be underestimated. The excitement among Black people across this country is palpable.

Black citizens in this nation have a complicated relationship with the court from the hallmark decisions of Dred Scott v. Sanford (1857); Plessy v. Ferguson (1896); to Brown v. Board of Education (1954) and hundreds of cases before and since.

Black people have experienced the court’s declaration of their non-citizenship and their restoration to constitutional equal protection. The former (Dred and Plessy) being based on the lived experiences of the justices instead of the U.S. Constitution.

There have been 115 justices on the court since it was established in 1789. Women earned the right to vote in 1920. The Civil Rights and Voting Rights Acts protecting the rights of Black people to vote were passed in 1964 and 1965 respectively.

Yet, there have only been five women on the court—Sandra Day O’Connor, Ruth Bader Ginsberg, Elena Kagan, Sonia Sotomayor, and Amy Coney Barrett. There have been two Black male justices—Thurgood Marshall and Clarence Thomas—and one Hispanic female justice.

In sum, only seven of the 115 U.S. Supreme Court justices—just 6%—have not been White males. Therefore, it cannot be said that President Biden’s commitment to add a Black woman to the court is political expedience, tokenism, or box checking—it’s imperative and long overdue.

Every judge and justice brings to the bench their lived experience, in addition to their intellect and educational pedigree. Yes, we all take an oath to uphold the law and we strive to do that.

But the law is not written or interpreted in a vacuum. It is interpreted by real people who live and experience this world differently based on who they are and the circumstances of their birth. For most of the past 233 years, the lived experience in the deliberation room has been primarily White men.

The burden of expectation will be high for the woman President Biden appoints. And whoever that first justice is, she will understand that she sits in that seat because of the hard work, sweat, and sacrifice of others known and unknown to her, and of course, because of her own hard work and determination.

She will follow her oath and have fidelity to the rule of law, knowing that the eyes of history are on her. She will be judged for every decision, every word parsed and analyzed. She will likely disappoint some of her supporters at times because the remedy they want cannot be provided in the law as written; but, she will always be solid on the law, collegial to her fellow justices, and nonpartisan in her approach.

Everything she has done in her life will prepare her to be strong and determined. She will realize she is one step on the walkway of history on which future generations of jurists from all backgrounds will seek to attain a seat on the most powerful court in the U.S.

This first Black woman justice will be history, like Thurgood Marshall. One hundred years from now, judges and attorneys will be quoting her opinions.

But, 10 years from now, there will be young Black law students looking to her, the way I looked to Thurgood Marshall, and believe: It’s possible. The decisions of the U.S. Supreme Court affect all of us. The people in the room making those decisions should reflect more of us.

Yvette McGee Brown is the partner-in-charge of Diversity, Inclusion, and Advancement at Jones Day and a partner in the Business and Tort Litigation practice where she represents corporate clients facing government scrutiny, complex litigation, internal investigations, and appellate matters. She was the first Black woman elected to the Franklin County, Ohio Common Pleas Court and the first Black woman to serve as a justice on the Supreme Court of Ohio.