President Donald Trump’s remarkable record of appointing conservative judges is leading to a dramatic shift in the make-up of several federal appeals courts. 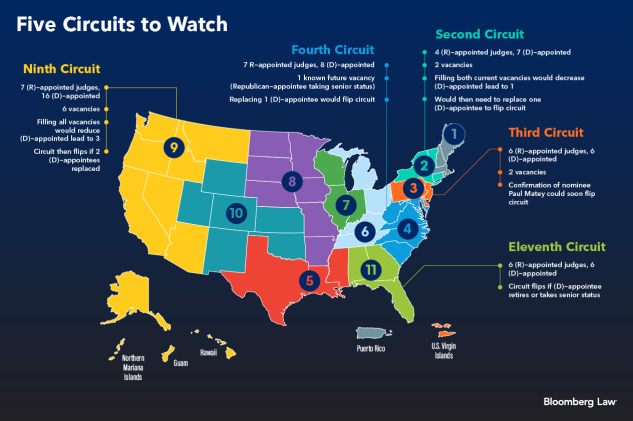 The Second, Third, Fourth, and Eleventh Circuits, whose territory ranges from Vermont to Florida, could all soon have a majority of Republican appointees.

Even the Ninth Circuit, which has stymied Trump’s orders on immigration and environmental policies, is within striking distance of flipping its seats to a majority of Republican appointees. 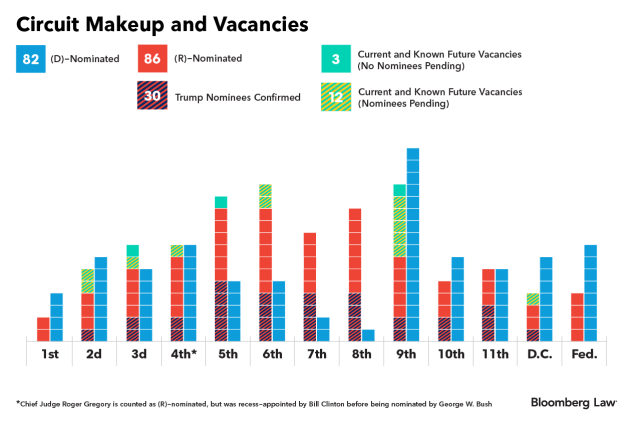 The 13 federal appellate circuits are the highest courts that most federal legal arguments reach. Few cases proceed to the next level, the Supreme Court, so flipping the ratio of Republicans to Democrats at the appellate level could have a significant and long-lasting effect on the interpretation of federal law.

The U.S. Court of Appeals for the Ninth Circuit could see significant changes in 2019, with six open seats and five pending nominees on the 29-member bench. If the vacancies are filled, flipping the Ninth Circuit would no longer be a fanciful goal for Republicans, who have frequently been at odds with the court.

It also stopped Trump from winding down an Obama-era program aimed at helping Dreamers, the approximately 700,000 individuals who were brought to the U.S. illegally as children.

Trump could reach a total of 100 appellate and district judge confirmations before the end of 2018, depending on a bipartisan deal that is being negotiated. That vote could come as soon as tonight.

What Color Is the Court?

Historically, the makeup of a court has not been thought of as “red” or “blue,” but in recent years, the nominations process—and the results—have become more politicized.

The party affiliation of a judge’s appointing president is an imperfect proxy, but a court “dominated by judges nominated by Republicans is more likely to please conservatives,” Matthew Stiegler, a sole practitioner who focuses on Third Circuit appeals, told Bloomberg Law by email.

Nearly 64 percent of the cases in the Supreme Court’s pipeline for the 2017 term were decided along partisan lines in the appeals process as measured by presidential appointments, Adam Feldman, creator of the Empirical SCOTUS blog, told Bloomberg Law by Twitter direct message. That’s “a statistically significant number.”

There is little that can stop majority Republicans from confirming judicial nominees in 2019, bolstered by an increased number of Senate seats after the midterm elections. The Senate will likely confirm anyone the president nominates, Russell R. Wheeler, a professor at American University law school in Washington, and a visiting fellow at the Brookings Institution who focuses on U.S. judicial systems, told Bloomberg Law.

Senate Republicans have helped Trump confirm a record 30 appeals court judges in his first two years, and have committed to keeping judges a priority in 2019.

Senate Republicans will likely have more time for judges over the next two years with the Democrat-controlled House able to stall the GOP legislative agenda.

Democrats decry what they see as a deviation from well-established customs in the judicial selection process.

Departing from norms tends to lead to more ideological nominees, Carl W. Tobias, a professor at the University of Richmond School of Law, told Bloomberg Law by email.

The “principal reasons for those norms are to protect the Senate minority party and encourage, if not forge, consensus and moderation,” Tobias said.

“Republicans are breaking every norm to stack the courts with young, ideological nominees who will undermine the rights and protections of all Americans for generations to come,” Dianne Feinstein of California, the top Democrat on the Senate Judiciary Committee, said in October.

What is considered normal? Consultation between the White House and the senators in a nominee’s home state, rejecting nominees with “blue slip” objections from home state senators, and nominating candidates approved by the American Bar Association, Tobias said.

The GOP “seems determined to keep ramming through the maximum possible” number of judges, with little regard for such norms, Tobias said. Democrats have few tools to slow the confirmation process, but they should “rigorously analyze and question nominees.”

A backer of Trump nominees expects that the aggressive confirmation push will continue.

“We will continue to see good progress on the judicial front,” at an even better rate than “we’ve had up until now,” Carrie Severino, chief counsel and policy director of the Judicial Crisis Network, which has supported Trump nominees with ad campaigns, told Bloomberg Law by telephone.

The political parties tend to emphasize different judicial philosophies when selecting judges, but most judges are nonetheless trying their best to uphold the rule of law, Scott A. Keller, who chairs the U.S. Supreme Court and constitutional law practice at Baker Botts in Washington said.

If Trump fills the Ninth Circuit’s six vacancies and no other judges retire outright or take senior status—a form of semi-retirement which opens up their seats—there will be 13 Republican-appointed and 16 Democratic-appointed judges.

Trump would then need to replace only two Democratic appointees to flip the circuit.

Filling the current vacancies would be significant because most of Trump’s pending nominees to that court “seem very conservative and young,” Tobias said.

Those nominees include Patrick Bumatay, who is about 40 and is an active member of the Federalist Society, an organization of conservatives and libertarians that has helped Trump pick judicial candidates.

If Trump fills the six vacancies, it could make a difference in numerous instances, but it would depend on the issue, Tobias said.

Rulings on some issues, like those involving the environment, correlate more with appointing presidents’ party affiliation than others, Wheeler said. But even those that correlate more don’t do so drastically, he said.

Though there may be little to slow Republicans in filling current appeals court vacancies, there may be relatively few vacancies opening in the future, Wheeler said.

“Recent history does not suggest a surge in vacancies,” Wheeler wrote in December.

(Update in eighth paragraph that new judges could be voted on tonight. An earlier version corrected the Fourth Circuit section to reflect that another Democratic appointee would have to step down for the circuit to flip. )