Attorneys wonder whether a bill targeting robocalls will be enough to halt the practice.
Angel Garcia/Bloomberg

It’s not easy to stop a robocaller.

The Federal Communications Commission has levied millions of dollars in fines for tricking consumers with spoofed calls. Phone companies like Verizon Communications Inc. and AT&T Inc. offer call-blocking tools and are working with law enforcement to crack down on scammers. Still, the number of robocalls received yearly are in the billions and rising.

After failing at least a dozen times to pass legislation to address the problem, Congress is considering a measure with good prospects of passage. The bipartisan TRACED Act (S. 151) by Sens. John Thune (R-S.D.) and Ed Markey (D-Mass.) would increase the FCC’s enforcement authority against illegal robocallers and mandate the adoption of call authentication systems. The bill has the backing of the commission as well as both industry and consumer groups.

The question some telecom attorneys have is how effective the bill can be.

“Giving the FCC more enforcement power is not going to help because the people making these calls are covering their tracks quite well and probably aren’t going to pay the fines anyway,” Charles H. Kennedy, partner at Wilkinson Barker Knauer LLP and senior adjunct fellow at technology think tank TechFreedom, told Bloomberg Law.

“It’s so easy to make a huge amount of robocalls,” YouMail CEO Alex Quilici told Bloomberg Law. A host of websites allow people to enter a pre-paid credit card and send out millions of calls without requiring any identification, he said.

The TRACED Act may be the first robocall bill in years to make it through Congress, which has struggled to craft measures that balance consumer and business interests. At least a dozen different robocall measures have been introduced since 2015 with none passing, according to data compiled by Bloomberg Government.

Thune is confident the bill will reach the finish line and is working with the Senate Commerce Committee to ensure it gets early action this year, a Congressional aide familiar with the matter said on condition of anonymity. 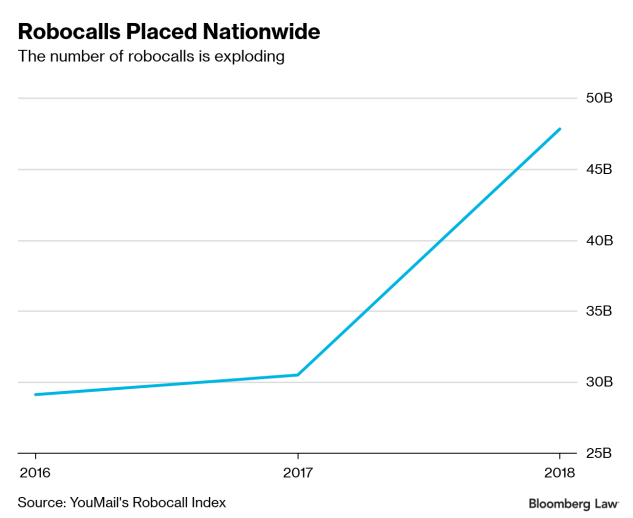 Combating robocalls isn’t always a bipartisan effort. There’s an “inherent push and pull between wanting to protect customers and wanting to protect legitimate business needs,” Christine M. Reilly, an attorney at Manatt Phelps & Phillips LLP and chair of the firm’s TCPA compliance and class action defense group, said. “It’s very hard to craft a bill that balances competing viewpoints on how far the law should go.”

The TRACED Act would enable the FCC to impose civil penalties of up to $10,000 per call to those who intentionally violate laws such as the Telephone Consumer Protection Act (TCPA). The measure also would require voice service providers to adopt call authentication technologies for verifying that calls are legitimate. It would exempt providers from liability for blocking calls based on information provided by those technologies.

Consumer groups such as the National Consumer Law Center and Consumers Union also welcomed the measure as an effort to stop unwanted and fraudulent calls from reaching consumers.

Since many scammers don’t respect the Do Not Call Registry or other rules that protect consumers from robocalls, “it’s really important that there be technology that the phone companies implement to identify and stop robocalls before they reach the consumer,” Maureen Mahoney, a Consumers Union policy analyst, told Bloomberg Law.

One weakness in the law, according to Reilly, is that it’s aimed at intentional violations. The vast majority of unwanted robocalls come from companies that aren’t purposely trying to run afoul of telemarketing restrictions, she said, and only a small percentage of robocallers are flagrantly violating the law.

It also may not be enough to counter scammers’ abilities to easily evade detection and enforcement, telecom attorneys said.

Robocallers are “always a step ahead of enforcement” by constantly changing numbers and employing technologies to disguise their identities, Mary Ann Wymore, a communications and media attorney at Greensfelder in St. Louis, said. A common technique is spoofing, in which scammers change the incoming call number to make the call appear to come from a local area.

Companies engaged in spoofing are often “fly-by-night companies” that lack resources to pay fines, Brian Hays, chair of Locke Lord LLP’s TCPA litigation and compliance section, said. “Increasing the hypothetical amount a bad actor could pay if it had any money will not discourage anyone,” he said.

Quilici said that while a call authentication system would likely reduce the amount of spoofing, it would just encourage bad actors to obtain valid phone numbers to blast out calls. “The fundamental problem is how easy it is to get telephone numbers or connect to the U.S. telephone network,” he said.

Hays said the TCPA already includes “all the teeth it needs to provide incentives to enforce the law.” Kennedy noted that industry’s technological initiatives to adopt call authentication will move forward “with or without the help of Congress.”


Still, others say the measure is a positive step that, combined with FCC, industry, and other efforts, could help reduce unwanted robocalls.

The bill is “one part of the solution, by strengthening enforcement and allowing carriers to block some calls,” Michelle W. Cohen, lead partner of Ifrah Law PLLC’s privacy and data security practice, said. But, she said, it’ll be “most effective in conjunction with other efforts,” such as the FCC’s move to create a database to let telemarketers check reassigned numbers.

“There is likely no single solution to the problem of unwanted robocalls, but the TRACED Act should be a significant move in the right direction,” Cohen said.