The Defense Department is seeking to adapt artificial intelligence technology it uses to track down terrorists with drones or predict when aircraft need maintenance for a new purpose: screening and testing novel coronavirus treatments and vaccines.

The Pentagon plans to boost existing programs with money Congress provided under the virus-relief CARES Act for the “development of artificial intelligence-based models to rapidly screen, prioritize, and test Food and Drug Administration approved therapeutics for new COVID-19 drug candidates.” The AI funds would also be tapped for human test trials for vaccines and antibody based treatments, according to the spending plan the department submitted to congressional panels.

(Ill.), the Senate’s No. 2 Democrat and ranking member on the Appropriations Defense Subcommittee, pressed for the plan’s release. 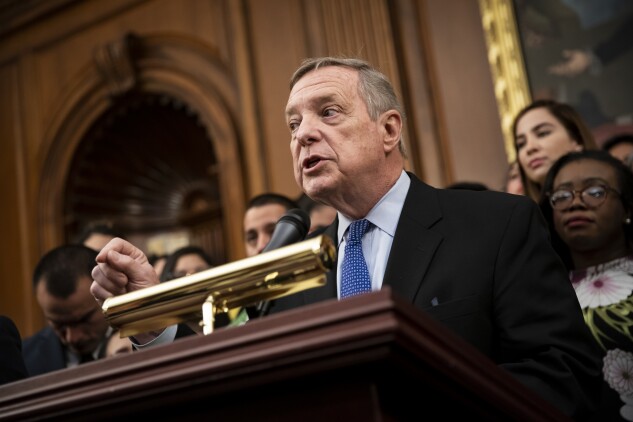 While the amount of money the Pentagon wants to use on these programs is small—-close to $1 million—it shows some of the department’s urgency to apply new technology to choke off the pandemic.

“Without this funding, such rapid AI-enabled screening capabilities cannot be established in time to respond to the current crisis,” the report said. It outlines the Defense Department’s overall plan for spending $10.5 billion the CARES Act ( approved for the U.S. military.

The Defense Department’s use of AI in vaccine development is part of a trend among scientists researching medical treatments. Machine learning models can help researchers predict which parts of viruses will be most effective in vaccines. AI experts at the Brookings Institution in Washington said they developed a model earlier this year and have shared their findings with several pharmaceutical companies developing Covid-19 vaccines.

The money for artificial intelligence will be shifted from $3.8 billion approved for the Defense Health Program under the CARES Act in order to prevent, prepare for, and respond to the coronavirus. The funds would go into the Pentagon’s research and development accounts.

Separately, the Pentagon also informed Congress it wants to shift around about $11.7 million to tap into Project Maven—the department’s maiden foray into AI, developed by .’s Google—to synthesize and offer situational awareness of Covid-19 data domestically and globally. Project Maven has sorted thousands of hours of drone video footage and satellite images.

The Pentagon created a Joint Artificial Intelligence Center in 2018 amid a growing belief that the technology would transform warfare, and its earliest application was assisting firefighters during rampant California wildfires and maintenance of military equipment.

Now, the pandemic gripping the country and threatening to collapse the economy has created a potential test for the center and its expertise, which Silicon Valley and big technology companies dominated until recently.

As part of the report to Congress, the Pentagon detailed how it plans to spend $688 million to protect key industries, including aircraft propulsion, shipbuilding industrial base in areas such as castings, forgings and submarine equipment, space launch, and microelectronics.

Another $200 million of the $10.5 billion is being applied to maintaining and improving the Pentagon’s teleworking capabilities. Officials estimate that as of April 20 the number of active-duty military and civilian personnel teleworking has increased globally to 970,000 from 96,500 since the pandemic accelerated. Worldwide gigabyte-per-second transmission capacity has increased 556%, said the report.

Separately, the Pentagon’s cybersecurity efforts have blocked more than 770,000 suspicious Covid-19 emails since the start of the crisis, the report said.

With assistance from Travis Tritten and Anna Edney (Bloomberg News). To contact the reporter on this story: in Washington at rtiron@bgov.com