IBM Corp., Toyota Corp., and a growing number of startups are using blockchains to try to crack down on online advertising fraud.

The complexity of online advertising and the struggle to track ad spending has allowed fraudsters to avoid being caught, attorneys told Bloomberg Law. But blockchain technology can uncover ad performance discrepancies and let advertisers and publishers know how many clicks an ad is really getting, the attorneys said.

Digital advertising is increasingly dominating the ad industry. Online advertising will account for 51.8 percent of total global advertising spending in 2020, up from 45.5 percent in 2018, Bloomberg Intelligence data show.

Ad fraud is a “big deal” for the digital media ecosystem, Bloomberg Intelligence analyst Paul Sweeney said. Fraudulent activity could cost advertisers $44 billion globally in 2022, up from $18.7 billion in 2018, according to Juniper Research, a digital market research firm.

Most ad fraud comes in the form of automated accounts, or bots, that inflate ad clicks, and companies offering ad space on fake websites. Fraudulent vendors sell advertising space on websites that don’t exist, or even real sites to which they lack access. Traffic brokers sell bot traffic at low costs to publishers to make it appear that a large number of people have clicked on an ad. A complex supply chain makes it difficult to know if an ad ran where it was supposed to, and how many people actually saw it.

Low-quality publishers with fake websites are primarily responsible for digital fraud, Bloomberg Intelligence analyst Geetha Ranganathan said. “It’s not so simple however since there is a fairly long supply chain when it comes to programmatic advertising and in some cases the vendors in the ecosystem are also responsible,” she said.

Blockchain promises to help remedy the problem by making the advertising ecosystem more transparent, attorneys say. The technology allows users to see and verify transactions on an unchangeable, decentralized digital record. It allows participants in an advertising supply chain to track each transaction and identify and resolve disparities in the data. 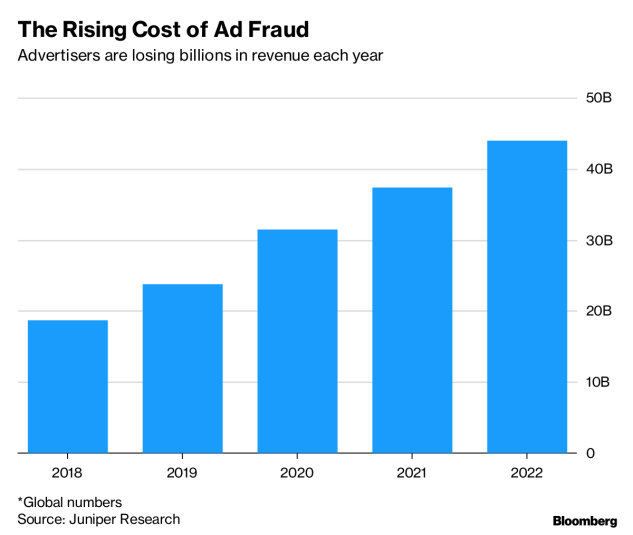 The digital ledger technology is gaining momentum as advertising companies realize the benefits of having an unchangeable record of ad performance data. The Interactive Advertising Bureau launched a pilot program in July to explore how blockchain can solve digital advertising challenges, including supply-chain transparency and data discrepancies.

Toyota has begun using a blockchain platform by advertising analytics firm Lucidity to track ad performance and identify miscalculations and fraudulent activity. Toyota has seen its ad performance, which can include clicks and length of time spent viewing the ad, improve by more than 20 percent since using the platform, according to Lucidity.

Dozens of parties—online ad networks, digital service providers, ad exchanges, and other intermediaries—are part of the digital advertising ecosystem. Each may measure ad performance differently, and some may miscalculate metrics by mistake.

Discrepancies in metrics and billing open the door for fraud, Sam Goldberg, Lucidity’s president and co-founder, said. “It’s far more difficult to get caught with a lack of transparency,” he said.

Blockchains allow advertisers for the first time to verify whether they’re getting exactly what they paid for, attorneys and industry representatives said.

All participants have access to a single, validated data set in real time showing how many ads have been placed, where they appear, how many times they’ve been clicked, and what type of audience is seeing them, Jehl said.

A majority of participants have to agree on the data for it to appear on the blockchain. Advertisers and publishers can analyze the data to detect and weed out invalid metrics, Jehl said.

“Everyone can see the same information and spend less time arguing about what ran where,” Jehl said.

While most advertising disputes are resolved privately, according to attorneys, such disputes can lead to costly litigation.

Facebook Inc. faces allegations in three separate lawsuits that it has inflated the amount of time users are watching video ads and misrepresented the number of people an ad will reach, Bloomberg Law data show.

Alphabet Inc.'s Google faces four ongoing suits over its advertising practices, the data show. The cases include allegations that Google failed to pay web publishers for ad revenue and misrepresented how it filters out fraudulent ad clicks. A lawsuit against Twitter Inc. accuses the social network of inflating prices for ad space due to the presence of fake accounts on its site.

Advertisers and other companies will continue working to apply and build out the technology to limit fraud, Kimberly Culp, a digital media attorney and director at Carr McClellan PC in Burlingame, Calif., said.