(L to R) Paul Davidson, Brett Bigger, and Chris Cornett work inside a communications tent at a Federal Emergency Management Agency base camp on March 27, 2014, in Darrington, Wash., after a massive mudslide in nearby Oso that killed at least 25 people and left many missing.
David Ryder/Getty Images

A telecom startup that’s staked its future on airwaves licenses it bought five years ago for $100 million is poised to get a major boost from the Federal Communications Commission to enter the lucrative broadband business.

Electric utilities, manufacturers, and transportation giants, including United Parcel Service and freight railroads, currently use the airwaves for dispatch radio communications. But pdvWireless, headed by the co-founders of Nextel Communications Inc., hopes to convince the FCC that opening up some of the airwaves for broadband use will not only benefit itself—allowing it to launch private LTE networks for businesses that use the spectrum—but is also in the public interest.

The agency will vote at its March 15 meeting to consider permitting broadband operations on the airwaves, located in the 900 megahertz (MHz) band, in response to pdvWireless’ petition filed in 2014. If the proposal is adopted, the FCC will seek public comment.

“We believe that realigning the 900 MHz band will create opportunities for robust broadband networks that fully support critical communication systems and that ensure the low latency and ultra-high reliability required by electric and other utilities,” the FCC said in its draft proposal.

If pdvWireless gets the FCC’s blessing, it would be the latest example of the agency agreeing to modify spectrum uses in response to the lobbying of a particular company. It could also be a gold mine for pdvWireless’ shareholders and its leaders, CEO Morgan O’Brien and Chairman Brian McAuley, who employed a similar business model with Nextel in the 1980s and 1990s.

Shares of pdvWireless jumped to their highest point this year when the FCC announced last month that it would consider broadband use on the airwaves.

“This is Nextel all over again—take useless spectrum, change how it’s being used, and make a ton of money out of it,” said Roger Entner, founder of telecom research firm Recon Analytics.

Ventures like pdvWireless’ have encountered resistance at the FCC before. LightSquared, which sought the FCC’s permission in the early 2010s to use satellite airwaves to launch a national wireless network, fell into bankruptcy after encountering fierce resistance from the Department of Defense and the global positioning system (GPS) industry over interference concerns. 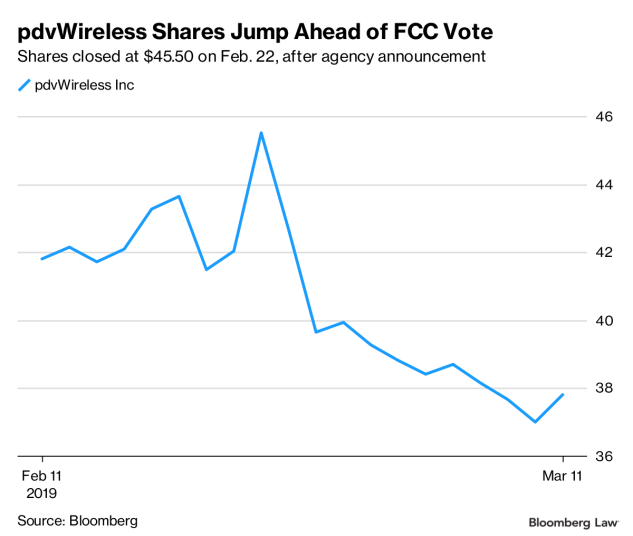 O’Brien and McAuley helped build Nextel into a multi-billion dollar company by buying up radio-dispatch airwaves licenses used by taxi and delivery drivers, and then getting the FCC’s approval to offer digital wireless services on the spectrum. Nextel and its spectrum holdings were sold to Sprint Corp. for $35 billion in 2005.

At the helm of pdvWireless a decade later, O’Brien and McAuley bought back 900 MHz airwaves licenses from Sprint for $100 million and petitioned the FCC to open up broadband operations on the band. pdvWireless argues that its planned private LTE network will bring significant benefits for utilities, such as the deployment of smart grid technology, while also protecting radio communications uses.

“We identified spectrum that is underutilized and asked the FCC to modernize the rules so the spectrum can be liberated and support new technology, and new competition,” O’Brien said in an interview.

Utilities and other entities that currently use the airwaves are split on pdvWireless’ plan, which would designate some 900 MHz airwaves for broadband use while leaving other parts of the band available for radio communications.

Supporters, including Southern Co., argue that pdvWireless’ plans would create more competition to the nation’s wireless providers in the enterprise space. Verizon Communications Inc., AT&T Inc. and other telecom giants devote most of their resources toward consumers, leaving open the possibility that a utility’s broadband connection will be slowed if there’s network congestion.

Other 900 MHz band users are urging the FCC to be cautious.

The Critical Infrastructure Coalition, which includes the Texas-based utility Lower Colorado River Authority and energy company NextEra Energy Inc., have raised concerns that allowing broadband use on the airwaves could disrupt radio communications during natural disasters, including hurricanes and flash floods.

Coalition members also want the FCC to ensure that they would have a fair shot to acquire broadband spectrum licenses to launch their own broadband networks if some of the spectrum is repurposed, instead of having to do business with pdvWireless.

Telecom watchers said the FCC will likely allow broadband use on the 900 MHz airwaves, as long as it finds it’s in the public interest, and wouldn’t cause radio interference.

“Unused spectrum is a lot less useful than used spectrum and if somebody makes a lot of money while doing that they don’t mind,” Entner said, referring to the FCC.