President Joe Biden wants to make it easier for cities to build and operate their own broadband networks, in competition with companies like and , to expand internet access as part of his sweeping infrastructure proposal.

The president is proposing lifting barriers “that prevent municipally-owned or affiliated providers” from “competing on an even playing field with private providers,” the administration said in a summary.

Municipal broadband networks vary widely in coverage and structure, but one model that has proved popular are citywide fiber optic networks, such as in Chattanooga, Tenn., that are funded through bonds repaid by revenues from the network. Some cities operate a fiber broadband network through a public utility, while other localities have partnered with private companies.

“It’s very similar to what people would get from a cable or telephone company, except better customer service, and better prices generally,” said Christopher Mitchell, director of the Community Broadband Networks Initiative of the Institute for Local Self-Reliance. 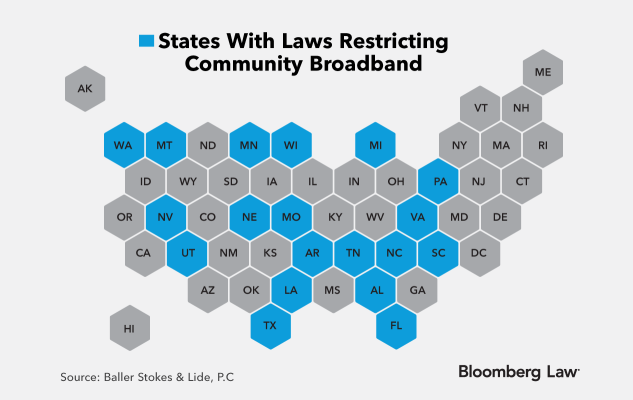 The pandemic has heightened the importance of having reliable and affordable internet access. Democrats argue that municipal networks can play a crucial role in expanding service. About 4.4% of Americans continue to lack access to fixed broadband internet at the FCC’s benchmark speeds, according to agency data. The percentage of unserved households climbs to 17.3% in rural areas.

“The pandemic obviously woke many states up to the essential nature of broadband—31 governors mentioned broadband in their state of the state,” Gigi Sohn, a former Democratic FCC official, said. “This really is a prime time to reverse this policy.”

Biden’s municipal broadband proposal is part of a $100 billion plan to expand broadband internet access to 100 percent of the U.S. population. The White House also said it’s committed to working with Congress to reduce internet prices, while criticizing broadband subsidies as a short-term band-aid to cover the cost of “overpriced internet service.”

Biden’s plan would also require internet providers to “clearly disclose the prices they charge,” and set aside funding to build broadband infrastructure on tribal lands.

The plan is in line with companion bills introduced in March by House Majority Whip (D-S.C.) (H.R. 1783) and Sen. (D-Minn.) (S. 745) that would override laws or regulations in states that make it difficult for municipalities to run their own broadband networks.

Nineteen states, including Michigan, Louisiana, and Florida have restrictions on municipal networks, according to an analysis by Baller Stokes & Lide PC.

State policies that impede the ability of municipalities to run their own networks take many forms. Pennsylvania and Montana prohibit municipal broadband in communities that are served by a commercial provider. Utah and North Carolina have requirements that in effect bar municipalities from providing internet service.

There are more than 140 citywide municipal fiber networks in the U.S., and hundreds of other communities operate smaller broadband networks. State restrictions have prevented many other cities from building out networks, according to Mitchell.

Democrats argue that lifting these laws would inject competition to private companies, lowering internet prices across the board and giving consumers more options.

Biden’s call to preempt state restrictions drew criticism from the cable industry trade group NCTA, whose members include Comcast and

“The White House has elected to go big on broadband infrastructure, but it risks taking a serious wrong turn in discarding decades of successful policy by suggesting that the government is better suited than private-sector technologists to build and operate the internet,” NCTA CEO Michael Powell, a former Republican FCC chairman, said in a statement.

“Many of these municipal governments are not trying to serve the unserved population,” O’Rielly said. “Most of the time that’s going to lead to overbuilding.”

The on-the-ground impact of preempting state restrictions on municipal broadband may be limited, said Blair Levin, policy adviser at New Street Research and a former Democratic FCC official. Levin said in an email that municipal broadband networks have not offered “material competition” to commercial providers in states where they are allowed.

“My view is, while it is useful for small rural communities and helpful for others in crafting partnerships for certain niche areas, I would not expect it to materially change the competitive landscape,” Levin said.

To contact the reporter on this story: in Washington at jreid@bloomberglaw.com

To contact the editors responsible for this story: at csaenz@bloombergindustry.com; at kperine@bloomberglaw.com