The Federal Communications Commission will soon decide whether to side with foreign satellite companies, including Intelsat S.A. and SES S.A., and allow them to sell their rights to a swath of public airwaves to speed the deployment of 5G technology.

Such a sale to the nation’s biggest wireless providers could bring in as much as $40 billion—and now Congress is threatening to step in and prevent the FCC from allowing the satellite companies to pocket the money.

Several influential lawmakers have fired warning shots at the agency in recent weeks, casting doubt over whether they’ll sit idly by if the FCC permits that kind of private sale of public airwaves at U.S. taxpayers’ expense.

“I think we have to ask ourselves: why should the FCC allow a group of foreign satellite providers to walk away with potentially tens of billions of dollars that could be used to solve our own country’s broadband needs?” Rep. Mike Doyle (D-Pa.), who chairs the House Energy and Commerce Communications and Technology Subcommittee, asked at a recent industry conference in Washington D.C.

The FCC is looking to open up mid-band airwaves in the 3.7 gigahertz to 4.2 gigahertz range, also known as the C-band, to wireless carriers including Verizon Communications Inc. and AT&T Inc. that need mid-band spectrum to power their 5G networks.

The satellite companies authorized to use the C-band airwaves arrange with cable providers, and TV and radio broadcasters to beam programming to more than 100 million U.S. households.

Comcast Corp. and T-Mobile US Inc. have separate proposals for the FCC to instead hold an airwaves auction to open up 5G-dedicated bandwidth that could bring billions of dollars to the U.S. government. Alphabet Inc.'s Google and Microsoft Corp. have come up with their own plans for the spectrum.

The agency faces the difficult task of transferring control of airwaves seen as critical to the U.S. winning the global 5G race, while fending off claims that it may approve a spectrum giveaway to foreign satellite companies.

The four largest satellite operators on the airwaves—Luxembourg-based Intelsat, and SES, Paris-based Eutelsat S.A., and Canada’s Telesat—have proposed selling their access to 200 megahertz (MHz) of C-band spectrum to wireless carriers. The plan would leave 300 MHz available for TV and radio programming while opening up the airwaves to carriers within 18 to 36 months—faster than if the agency auctioned off licenses, the companies claim.

The satellite operators say they deserve to keep the proceeds—potentially as much as $40 billion, according to industry estimates—for voluntarily giving up the airwaves. The companies have won the backing of Verizon, and Republican FCC Commissioners Mike O’Rielly and Brendan Carr have praised the plan without officially endorsing it.

If the FCC backs the proposal, it essentially will be trading a chance to fatten the U.S. Treasury coffers in exchange for the faster launch of 5G service. FCC Chairman Ajit Pai hasn’t said whether the agency will move on the satellite operators’ proposal.

The satellite companies say their plan complies with FCC rules, and legally is no different than any other private spectrum license sale. Opponents say the plan breaks with FCC precedent because the satellite companies, rather than the FCC, would decide how much spectrum to repurpose from satellite to wireless use, and what entities can get the airwaves.

As telecom industry lobbying has increased in the last few months, so has concern on Capitol Hill and the potential for legislative action, several congressional aides and industry lobbyists told Bloomberg Law.

“Why wouldn’t we auction the spectrum that is licensed by the taxpayers and use the estimated $40 billion in proceeds to expand rural broadband in places like Alaska that need it, and of course, other states represented on this panel,” Sen. Dan Sullivan (R-Alaska) said in February at a Senate Commerce, Science, and Transportation Committee hearing.

Eleven companies and industry groups that are involved in the C-band fight spent nearly $123 million last year on lobbying, including on spectrum issues, according to the Senate Office of Public Records and the Center for Responsive Politics. 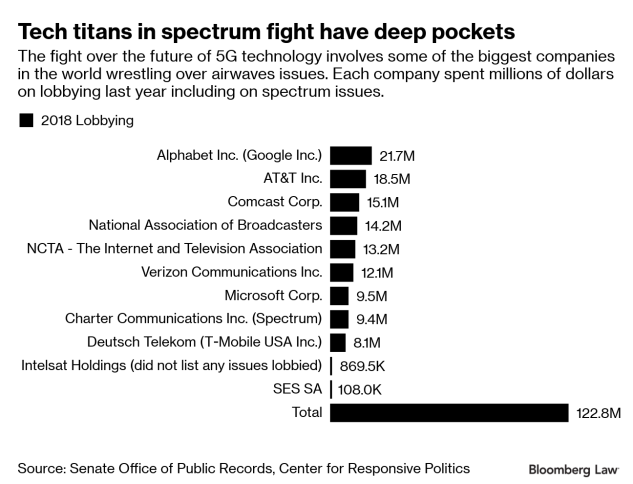 Doyle plans to introduce legislation that could address his concerns with satellite companies’ proposal, the congressional and industry sources said, including ensuring that U.S. taxpayers get a piece of the spectrum proceeds. Sens. Cory Gardner (R-Colo.) and Maggie Hassan (D-N.H.) are also working on spectrum legislation that may include provisions on C-band airwaves, the sources said.

Bills introduced by Doyle in the House and Gardner and Hassan in the Senate in the last Congress would have forced the FCC to auction off C-band airwaves.

The satellite companies’ proposal “brings up a lot of questions that need to be answered before any transaction moves forward,” Doyle said.

Some lawmakers have raised additional concerns about whether smaller companies would have a shot at the airwaves under the satellite operators’ proposal, and about potential TV programming interference, congressional aides and lobbyists said.

The satellite companies have vowed to set aside some C-band airwaves for small carriers. But the Competitive Carriers Association, which represents rural and regional carriers, remains skeptical.

The satellite companies argue that opponents are trying to slow down the C-band reallocation for anti-competitive reasons. Cable companies are concerned about 5G wireless services cutting into their fixed broadband businesses, while T-Mobile won’t need C-band airwaves if federal regulators approve its merger with Sprint Corp. and Sprint’s spectrum holdings.

Google and Microsoft each have proposed that the FCC allow point-to-multipoint communication (P2MP), which can be used to provide wireless internet service, on parts of the C-band.

Satellite companies, broadcasters, and cable companies have urged the FCC to reject the plan on grounds that permitting P2MP use on C-band airwaves would disrupt TV and radio programming.

Opponents of satellite companies’ plan note that Congress has blocked the FCC in the past from allowing spectrum proceeds to go to industry stakeholders. In 2002, Congress passed legislation introduced by the late Sen. John McCain (R-Ariz.) to block the agency from doling out spectrum auction revenues to broadcasters that agreed to move off airwaves intended for wireless use.

“It’s hard to imagine Congress will not weigh in on this if past is precedent,” said Michael Calabrese, an opponent of the satellite companies’ proposal who heads the Wireless Future Project at the Washington-based New America group.

(Sixteenth paragraph updated to include sourcing for potential legislative action.)