Cities from Los Angeles to Boston are fighting a Federal Communications Commission decision they say will cost them millions by letting cable TV providers such as Comcast Corp. partly pay them with services like free air time instead of money.

At least 46 cities are asking federal appeals courts to undo an FCC order they argue will force them to raise taxes or cut spending on local media services, including channels that schools, governments, and the general public can use for programming.

The lawsuits reflect a larger clash of interests among localities, media companies, and the FCC brought on by the agency’s tactic of promoting broadband deployment nationwide—especially in rural areas with spotty or no internet access—by easing rules for business.

The order’s backers say cable companies won’t be as willing to invest in internet services, and build infrastructure, if they have to provide public access TV and other telecommunications services on top of the franchise fees they’re required by statute to pay.

“American consumers expect and deserve next-generation broadband networks and shouldn’t have to see that progress slowed by some localities’ attempts to evade Congress’s statutory framework and impose duplicative taxes and fees,” Michael Powell, president and CEO of NCTA—The Internet & Television Association, said in a statement after the FCC approved the order, which took effect Sept. 26.

Cities, though, see a future of diminished returns.

“We’re going to see a chilling effect that cable companies are having on their communities,” Angelina Panettieri, principal associate for technology and communications at the National League of Cities in Washington, said. 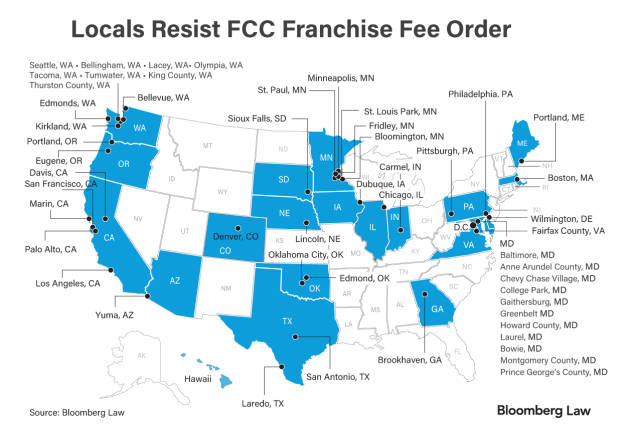 The cities, along with eight counties and the state of Hawaii, have filed seven petitions in three different circuit courts, Bloomberg Law data show. Los Angeles filed challenges twice as both a city and a county. Most of the cases are being consolidated in the U.S. Court of Appeals for the Ninth Circuit, and the cable industry hopes a ruling will clarify which services may count toward the fee.

Under federal law, franchise fees are capped at 5% of an operator’s cable service revenue in each jurisdiction. The FCC’s order lets cable companies calculate and subtract from the 5% the market value of cable-related, non-monetary contributions, such as public-access channels and free advertising slots. The order also prevents local governments from regulating the companies’ broadband internet services.

Cable operators pay $3 billion per year in franchise fees to state and local governments, according to the NCTA. Each franchise agreement is different, with cities asking cable companies for any number of services, such as new networks for schools or public libraries, and each has a different company-determined value.

If companies contribute less than 5% in cash, cities will have to reduce their public media budgets, stop offering services, or cut into other programs to make up the difference, Christopher Ali, associate professor in the University of Virginia’s media studies department, said.

The order also stifles municipal decision-making authority over franchise terms, Ali said. “It allows cable companies to call the shots a lot more than they used to,” he said.

But the NCTA and FCC say consumers will ultimately suffer if cable companies can’t get credit for services like public-access TV, and as a result cut down on other investments. An NCTA-commissioned study found that consumer welfare losses, such as poor or no rural internet access, would amount to $40 billion by 2023 if operators cut back on upgrades.

The FCC issued the order after the U.S. Court of Appeals for the Sixth Circuit struck down two previous orders in 2017. The court in Montgomery County v. FCC said the FCC failed to explain why the Communications Act allowed non-monetary contributions to count toward franchise fees.

The court sent the matter back to the agency, which issued the new rule based on an interpretation that the law doesn’t exclude “in-kind” contributions from the franchise fee definition.

Franchise fees under the law include “any tax, fee, or assessment of any kind imposed by a franchising authority,” according to the new order, and “those terms should be interpreted expansively and given ‘maximum breadth.’”

FCC Chairman Ajit Pai, in announcing the order, said Congress exempted capital costs of public, educational, and governmental access channel equipment from counting toward the cap, and could have done likewise with non-monetary services, if that was its intent.

Gerard Lederer, counsel for some of the cities and a partner at Best Best & Krieger LLP in Washington, argues that interpretation “breaks with the plain reading of the statute and 35 years of past practice.” The law differentiates between franchise fees and costs, showing that Congress understood there would be costs over and above the fees, he said.

Lederer also said there’s been a “significant slowdown” on franchise agreement renewals because of uncertainty over the order’s impact and whether a court will overturn the changes.

The Ninth Circuit may ultimately decide how to read the law, although the FCC has moved to get the matter transferred to the Sixth Circuit because that court is familiar with the issue. A transfer would “maintain continuity and consistency in the review of interrelated FCC orders,” the agency said in its motion to transfer the case.

The FCC’s order reflects the agency’s overall effort to help the U.S. lead the global race to develop next-generation wireless networks. Pai has said every dollar spent on costs beyond the 5% franchise fee cap is a dollar that cable companies could spend on wireless upgrades instead.

The commission has eased other regulations toward the same goal, including limiting what local governments can charge wireless carriers to deploy small cell equipment for a 5G buildout. Dozens of cities and counties are challenging that order in another case pending in the Ninth Circuit.