The surge in unemployment claims brought on by the Covid-19 pandemic produced a welcome side effect for some major accounting firms—big paydays for their tech consulting and government service businesses.

The 11 states where Bloomberg Law confirmed terms of the deals agreed to spend a combined $173.8 million on contracts with Accenture, Deloitte, and EY. Deloitte dominated those contracts, with $141.1 million of the total.

The contracts account for only a portion of what states are spending to beef up unemployment claims systems in response to the pandemic, and other state agencies said they handled upgrades with in-house staff or through existing vendors.

The federal response to the pandemic created a strong demand for government IT consulting, and the contracts hint at big firms’ nose for sniffing out data-rich and personnel-intensive work on behalf of government clients.

More of this work is on the horizon, as Congress debates whether and how to continue expanded unemployment benefits. At a minimum, state unemployment agencies have to switch off the extra $600 of federal unemployment benefits that end this week. How much reprogramming the next step requires will depend on what Congress passes, and state officials fear the Senate GOP proposal to provide a variable payment of 70% of past wages will create a logistical nightmare.

“These big firms have a long history of being able to come into a big challenging data management environment and wrestle it to ground,” James Peterson, a lawyer and former partner at accounting firm Arthur Andersen, said in an interview. “And the state systems are plainly overwhelmed by the volume that’s fallen upon them since March. They’re on the verge of being obsolete and falling down anyway.”

Deloitte declined to make someone available to discuss these contracts.

The company provided a statement describing its work for several states. Deloitte said it is “the nation’s leading provider of health and human services consulting” and “successfully modernized labor and workforce systems in two dozen states.” 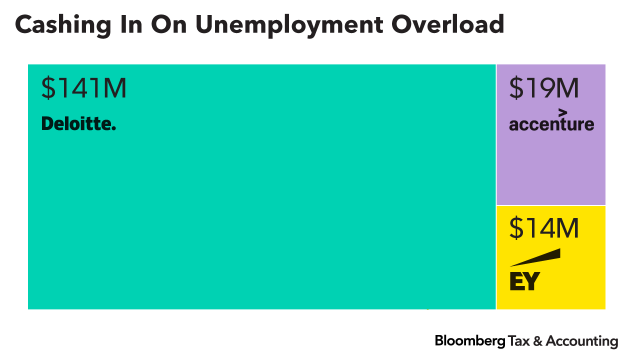 States rushed to upgrade systems in March when Congress created new categories of jobless benefits as part of its CARES Act legislation, including the Pandemic Unemployment Assistance for independent workers such as those in the gig economy who don’t qualify for traditional unemployment insurance.

State agencies faced a difficult reality: trying to pay out new benefits as quickly as possible and fielding a flood of claims for traditional unemployment insurance, all while trying to prevent fraudulent claims.

“Standing up our PUA system was a very big lift,” Cher Roybal Haavind, a deputy director and spokeswoman for the Colorado Department of Labor and Employment, said in an email. Colorado had to build a separate claims system from its traditional UI system, factor in last-minute federal guidance and try to serve a workforce segment the department hasn’t served before. “This effort was comparable if not greater than the numerous extensions during the Great Recession.”

Deloitte set up Colorado’s PUA system as part of its existing contract with the state at an estimated $3 million, Haavind said. Other states spent significantly more on outside vendors as the glut of claims shocked their systems.

The New York Department of Labor contracted with Deloitte for up to $87.8 million in call center, data entry automation, and other services. The state has paid out more than $34 billion in benefits to more than 3.2 million claimants. That amounts to the last 16 years’ worth of benefits—all paid out in the last six months.

Kentucky’s system was so backed up “bread lines” formed as hundreds of claimants waited in the hot sun for filing assistance. The state is paying EY $12 million to churn through claims.

EY declined to make someone available to discuss these contracts, but issued a statement saying the firm is “committed to helping our clients have the systems and practices in place to deliver needed benefits to those in their community impacted by unemployment during this pandemic.”

Accenture struck at least $19 million in contracts with Texas, Michigan, Tennessee and Kansas.

Deloitte won contracts from Illinois ($22 million) and California ($17.6 million), states where media have scrutinized the deals due to a lack of bidding, the size of the contracts, or concern over the firm’s prior work on unemployment systems.

Ohio also went with Deloitte, paying the firm $9.6 million to set up a PUA claims system, largely because the firm had an off-the-shelf product that could be ready to go quickly, Bret Crow, a spokesman for Ohio’s Department of Job and Family Services, said in an email.

“Considering the urgency of the Covid-19 pandemic, it was critical for our agency to move swiftly in procuring a system with the ability to handle PUA activity,” Crow said.

Deloitte’s work has also brought litigation, spurred by the economic fallout of Covid-19.

In Florida, a proposed class-action lawsuit by laid-off workers seeks damages from Deloitte and the Florida Department of Economic Opportunity for the delays and dysfunction in Florida’s unemployment claims system. Deloitte built the system in 2013 at a price tag of $77.7 million, according to the lawsuit.

Deloitte countered that it hasn’t been involved in maintaining Florida’s system for the last five years and isn’t accountable for how the system works now, according to the firm’s motion to dismiss the case.

Deloitte also faces a pair of lawsuits by groups of Ohio residents who say their personal information was publicly viewable by other users of the state’s unemployment claims system, which Deloitte built.

States could face a new round of challenges as they transition away from one pandemic unemployment benefit to another form of payment, potentially generating more work for consultants racing to help states get workers the cash.

Millions of Americans are losing the extra $600 weekly federal unemployment benefit that expires this week. Extending that benefit or implementing another flat rate would be relatively easy for states, Haavind said.

However, other proposed tweaks, such as a “return to work bonus,” would be “far more complex” and could require significant reprogramming, Haavind said.

The Senate GOP version calls for more than $1 billion to assist states’ unemployment systems, with Democrats proposing $900 million. But Congress could ease states’ pain by keeping the unemployment benefits scheme as close as possible to its current format, said Michele Evermore, a senior policy analyst who studies unemployment at the National Employment Law Project, a pro-worker research group.

Creating whole new benefit formulas “not only takes time, it ends up affecting claimants. It takes taxpayer dollars,” she said.

Senate Republicans have argued against extending the $600 weekly federal benefit. They say it discourages unemployed people from returning to work. Labor Secretary Eugene Scalia said in a televised interview on Tuesday the GOP proposal for a 70% wage replacement still exceeds the 60% to 66% level that worker advocates have often suggested.

-with assistance from Ben Penn in Washington

To contact the editors responsible for this story: at mmali@bloombergindustry.com; at jlauinger@bloomberglaw.com; at jharrington@bloombergtax.com