Blockchain patent wars may be looming, and companies are experimenting with preventive measures.

Startups and industry leaders, like IBM Corp. and Alphabet Inc.'s Google, are winning patents for the technology that is fueling cryptocurrencies and being applied to traditional businesses. They are also increasingly coordinating to uncover solutions—from cross-licensing and pooling patents to patent pledges—that would help ward off patent trolls and infringement lawsuits that plagued past tech revolutions, like the semiconductor or mobile phone booms.

“You’re seeing a much more aggressive effort of a nascent industry to create pools and a pool environment,” Josh Krumholz, co-leader of Holland & Knight LLP’s intellectual property practice, told Bloomberg Law. “It’s unsurprising to me because they’re obviously taking lessons from other industries like telecom.”

Many blockchain-related startups will likely fail, creating opportunities for trolls to scoop up their intellectual property and seek profits by suing other companies for allegedly infringing those patents, the attorneys say. But patent assertion entities don’t make products, meaning the intellectual property will not be harnessed to create other technological inventions.

Companies like Bank of America Corp. and Facebook Inc. filed 700 blockchain-related patent applications with the U.S. Patent and Trademark Office, with the office granting about 70 of those filings, Bloomberg Law data from 2011 to April 30 show. The data didn’t track denied or abandoned applications. 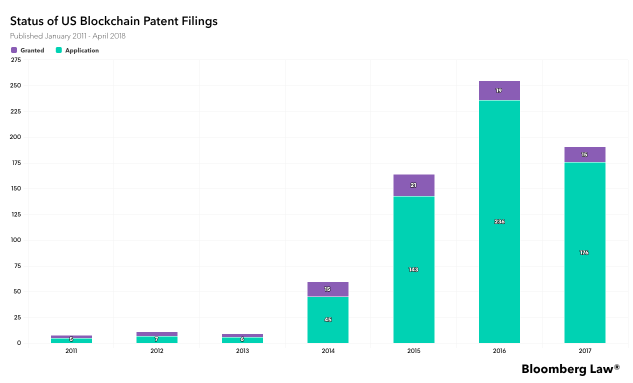 To be sure, no infringement lawsuits have yet been filed against any U.S. blockchain-related patent, according to Bloomberg Law data. And efforts to organize blockchain patent pools and other defensive strategies could be stymied by market factors and technical obstacles, attorneys and industry officials say. Even so, companies have at least started hunting for strategies to counter a potential wave of blockchain-related lawsuits to come.

Patent pools and pledges have been popular with high-tech industries for decades as a way to fend off costly lawsuits from competitors or trolls. Pledges are public agreements that generally say a company won’t sue others for infringing their technology if they comply with certain conditions. Pools allow multiple companies to enter into these types of pledges and cross-license patents to one another.

MPEG LA LLC, which has launched patent pools since the 1990s for technologies ranging from DVDs to gene editing, is considering creating a blockchain pool, a spokesperson said.

The network expects to add more blockchain IP assets in the future, CEO Keith Bergelt told Bloomberg Law. Its more than 2,000 members include blockchain patent holders like IBM and Google, he said.

Meanwhile, large financial service companies—which have been some of the top blockchain patent winners in the U.S.—are more likely to stick to established networks that give them more control over their patents, such as the LOT Network, Leslie Spencer, partner at law firm Ropes & Gray LLP, said.

The more than 200 companies in the LOT Network control their patents, but must agree to give royalty-free licenses to each other if they plan to sell the patent to a troll.

“I’m trying to take as many weapons off the table as possible,” Ken Seddon, CEO of LOT, said, comparing patents to weapons for infringement lawsuits.

Joshua Death, associate vice president of TD Bank Group’s legal division, said the company joined LOT partly because, even though the value of patents for new technologies like blockchain is still developing, LOT’s pool of innovative companies helps ensure the group will cover the most important patents.

“It’s really the pool of members that you are putting your confidence in,” Death said.

The collaborative nature of blockchain’s technology could also be drawing companies into patent pools or agreements, David Teske, head of Alston & Bird LLP’s technology and privacy team, told Bloomberg Law. Blockchain technology allows up to millions of different individuals or companies to record transactions, like payments or property rights, on a single ledger.

“You necessarily have to have groups of people working a blockchain for it to be effective,” Teske said. “It’s not 20 years ago where I want to build my business on the internet and I want to stop everyone else from doing this.”

In other words, a blockchain patent-holding company may find others interacting with its blockchain using its patented technology—but singling out fellow users for infringement might defeat the purpose of their collaborating.

Blockchain’s participatory nature could also induce abuse, and some startups see patent pools as a solution. A blockchain participant with patented hardware or software that’s significantly more powerful than other participants’ technology can exert outsize influence in the mining or chain-building process.

Blockchain Defensive Patent License, a new pool launched this spring, hopes to prevent such abuses by allowing cross-licensing among its members, according to a statement by Singapore-based QRF Solutions Pte Ltd, a member company.

Many sectors are developing the technology, and companies within these sectors may lack commonalities that would drive them to be in a pool, blockchain attorneys and companies said.

The dispersed state of blockchain patents may make it harder for industries to unite around core, common patents that would interest members with varying agendas and needs, Marc Kaufman, a partner and patent attorney at Rimôn P.C., told Bloomberg Law. By contrast, the need for interoperable, shared technology drove the wireless and semiconductor industries into pools, he said.

Companies also may be hesitant to join a pool at this stage because the technology—and the patents—are fairly new, and they can’t properly assess their value, Kaufman said.

Some blockchain startups also may not want to be seen as having “sold out” by filing for patents in the first place, Belcher said. Many of them lean toward the anti-patent, free-sharing ethos that first inspired the technology and led to open-source code sharing arrangements, she said. Still, startups that want to protect their blockchain inventions—but are facing pushback from their own open-source oriented engineers—are looking to pools and pledges as compromises, Belcher said.

Ultimately, blockchain technology’s character and ethos will shape the pools and other defensive strategies used to protect it, attorneys say.

No matter the shape of these defense postures, the time to create them is now — before the lawsuits start flying, Kaufman said.

“The industry is talking about this early,” Kaufman said. “You ought to be considering every one of these tools.”

To contact the reporter on this story: Michaela Ross in Washington at mross@bloomberglaw.com