President Joe Biden’s administration has made several moves breaking from the previous administration’s approach to standard-essential patents, charting a course more favorable to and other companies wanting to pay lower royalties on critical technologies.

Makan Delrahim, the Justice Department’s head of antitrust under Donald Trump, was an ally to patent owners, taking the view that antitrust law has a limited role in licensing disputes over patents essential to telecommunications and other industry standards.

The pendulum is starting to swing back toward companies that use the patented technologies and toward efforts to make standard-essential patents more accessible.

There are several signs of change, including the call in Biden’s executive order on competition that asks the Justice and Commerce departments to reconsider the previous administration’s stance that patent holders have a right to seek injunctions against potential licensees in cases involving standard-essential patents, or SEPs.

“On balance the new administration is likely to be more receptive to implementer complaints that they have to pay too much,” said Nicholas Matich, an attorney at McKool Smith PC in Washington and former acting general counsel at the U.S. Patent and Trademark Office.

Apple and other tech companies, meanwhile, also are lobbying for state laws that could address what they view as anticompetitive behavior from some patent owners.

Companies that are part of developing industry standards commit to license patents that are essential for those standards on terms that are “fair, reasonable, and non-discriminatory.” Potential licensees increasingly have turned to antitrust law when those commitments are alleged to have been violated.

Biden in the executive order encouraged officials at the Justice and Commerce departments to consider revising a 2019 policy statement on the availability of injunctions and other remedies in cases involving SEPs.

The 2019 statement—issued jointly by the Justice Department, the U.S. Patent and Trademark Office, and the National Institute of Standards and Technology—indicated that SEP holders aren’t barred from seeking injunctions.

It replaced Obama-era guidance suggesting that injunctions in SEP cases may be “incompatible” with FRAND commitments and could harm competition.

The tech industry has complained that some SEP holders demand licensing rates above what is considered fair, reasonable and nondiscriminatory under the threat of injunctions that would block products from entering the market. 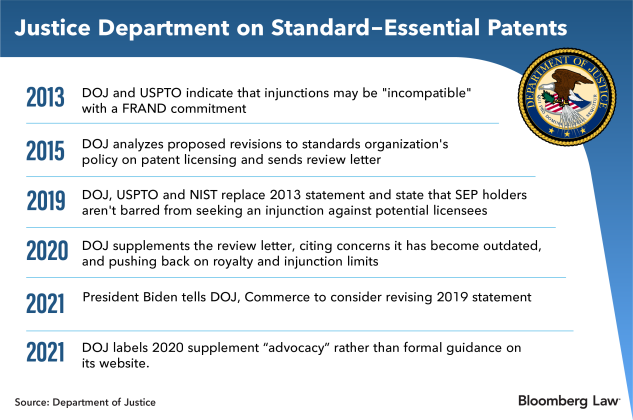 The DOJ also reclassified a September 2020 letter that Delrahim wrote to the Institute of Electrical and Electronics Engineers, a standards development organization. The 2020 letter said previous DOJ guidance to the IEEE was “frequently and incorrectly” cited as an endorsement of IEEE policy, which included prohibitions on SEP holders from obtaining injunctions against potential licensees.

The letter is now labeled as “advocacy,” rather than formal guidance.

Another potential sign of change patent attorneys noticed was Justice Department filings in a fight between auto parts supplier Continental AG and Avanci LLC, a licensing pool. Continental argues Avanci violates antitrust law when it negotiates licenses with automakers, rather than parts makers.

Continental appealed after its case was dismissed. The DOJ earlier this year offered to provide the U.S. Court of Appeals for the Fifth Circuit with its “current views” on the issue.

Delrahim, now an adjunct lecturer at the University of Pennsylvania, urged government lawyers to use caution when considering policy changes. Otherwise, they could end up “flouting the recent rulings at the courts,” he said during a webinar hosted by Concurrences, an antitrust law journal.

Delrahim’s comments appeared to be a reference to a ruling from the U.S. Court of Appeals for the Ninth Circuit in August, which held that ’s licensing practices aren’t anticompetitive. The court said Qualcomm didn’t have an antitrust duty to license rival chip suppliers.

The DOJ during Delrahim’s time filed briefs supporting Qualcomm, and going against the Federal Trade Commission, another antitrust enforcer.

A common thread in the Biden administration’s choices for crucial government positions is a desire for more access for technology, attorneys say.

For standard-essential patents, that could mean making licenses more available and at lower prices.

“That’s the flip-side of the Trump administration, where the administration was trying to help patent owners get more for what they invested in their technology,” said DJ Healey, an attorney at Fish & Richardson PC in Houston.

The tech industry also is looking to see what states can do.

ACT | The App Association approached the Uniform Law Commission last year about studying state-level SEP legislation. More than a dozen tech groups and companies, including Apple, , and signed onto a letter expressing support for the idea.

It called for state laws that would, among other things, prohibit companies from refusing to license SEPs to any entity requesting a license, and prohibit injunctions unless there is refusal to pay a court-determined FRAND royalty.

The ULC decided this month not to move forward with the project, but supporters aren’t abandoning the idea of states taking a role in SEPs.

“We’re still committed to the idea that states have some role in pursuing and protecting the business in their state and their own consumers from the harm caused by SEP holdup,” Brian Scarpelli, senior global policy counsel at the ACT |The App Association, said.

Joshua Landau, patent Counsel at the Computer & Communications Industry Association, suggested states may not have to pass new legislation, and could take action under existing unfair competition laws. Vermont and other states used these statutes in the past to target companies that sent abusive patent licensing letters.

One concern, however, is that states could take different approaches and impose different licensing obligations on companies.

“If the states can coalesce and get together on this, they could have a tremendous impact,” Healey said.