Lawmakers in both parties have signaled interest in requiring interoperability between platforms.
Photographer: Denis Charlet/AFP via Getty Images

To curb the power of Big Tech, lawmakers are eyeing a world where Facebook users could communicate seamlessly with users of rival platforms like Twitter—similar to the way phone networks function today.

That concept, known as interoperability, was employed by Congress after the breakup of the AT&T telephone monopoly in the 1980s, allowing customers of competing phone companies to call each other without restrictions.

As the House and Senate lay the groundwork for an overhaul of antitrust law, lawmakers are dusting off the decades-old concept of interoperability as a possible solution to rein in , , , and

“You can be on your Verizon cellphone in California and call Aunt Mildred on a Frontier landline in North Carolina, and the calls are almost seamless,” said Herbert Hovenkamp, an antitrust professor at the University of Pennsylvania Law School. “That speaks and should speak loudly when we start thinking of what to do with the platforms.”

Big Tech’s dominance forces users to pay a heavy price if they decide to move platforms. A Facebook user may struggle to move all their data and social connections to a new platform. A company that uses Amazon Web Services may face hefty fees and engineering costs if they change cloud computing providers.

Another decades-old idea known as portability, also being eyed by lawmakers, would enable consumers to transfer their data to other platforms—similar to how consumers can keep their phone number when changing carriers. 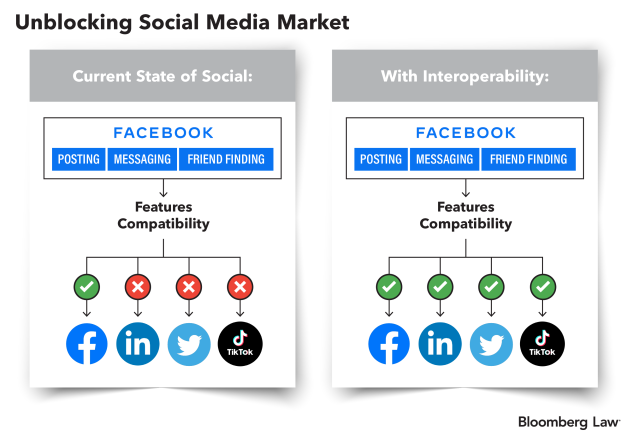 As part of the Bell System breakup, AT&T in 1984 spun off its local telephone companies into seven independent carriers known as the Baby Bells, which held regional monopolies. Congress aimed to foster competition in the Telecommunications Act of 1996 by compelling the Baby Bells to interconnect their networks with upstart phone companies.

House and Senate hearings have exposed deep divisions among Democrats and Republicans on sweeping proposals to breakup the tech giants and require line of business restrictions.

But lawmakers in both parties have expressed interest in drafting legislation that would require big tech companies to make their platforms interoperable, and let consumers move their data to different networks.

Such rules would target tech companies’ ability to leverage their dominance to squeeze out competitors, which has been the subject of state and federal lawsuits.

Facebook in 2013 blocked Vine, a Twitter video app, from accessing application programming interfaces, which enable platforms to interact with each other. The access would have allowed Vine users to find each other if they were friends on Facebook, according to an antitrust lawsuit filed last year by the Federal Trade Commission. Twitter shut down Vine in 2016 after finding it “extremely challenging” to compete, CEO Jack Dorsey said at a Senate Judiciary Committee hearing in November.

“By cutting off Vine, Facebook prevented it from accessing APIs that would have helped it grow,” the FTC said in the complaint.

At the Senate Judiciary Committee hearing, Facebook CEO Mark Zuckerberg said he “generally” supports interoperability but that the company has at times limited access to prevent “larger competitors like Google and some of our Chinese rivals, from trying to access our systems in order to use their scale to compete with us better.”

Google has thwarted competition by “severely” limiting interoperability to essential features of its Search Ads 360 service, a tool that allows advertisers to place ads on search engines like Google Search and Microsoft Corp.'s Bing, 35 states allege in an antitrust lawsuit filed in December.

Google only allows advertisers to use real-time user data when bidding for ad space on Google Search, while “withholding equivalent interoperability from Microsoft,” the states allege in the complaint.

“Google and Facebook have dug moats around their very formidable castles, trapping users from leaving the network, effects of their products and systems can have devastating effects on competition,” Sen. (D-Conn.) said at a recent Senate Judiciary Antitrust Subcommittee hearing. “My view is we need interoperability and portability requirements to break down the walls they have established.”

Blumenthal helped draft a bipartisan bill in the last Congress with Sens. (D-Va.) and (R-Mo.) that would have required all social media platforms with more than 100 million active users to make their networks interoperable and allow data portability.

Imposing interoperability and data portability on tech companies would likely lead to major changes for consumers, just as they did in the telephone industry.

AT&T can’t block its customers from calling Verizon subscribers, and phone numbers are portable so consumers get to keep their numbers when switching carriers.

“Consumer-oriented data portability and interoperability policies will further facilitate competition in the marketplace,” Rep. Ken Buck (R-Colo.), ranking member on the House Judiciary Antitrust Subcommittee, said at a hearing last month. “Perhaps one of the most popular and procompetitive actions Congress ever took was mandating mobile phone number portability in the Telecommunications Act of 1996.”

“There would be more competitors because we’ll have created an environment where an entrepreneur feels confident starting up a business that Facebook’s not going to have the power to shut them down,” Slaiman said.

Lawmakers are still grappling with how to craft interoperability and portability rules to an industry that has ballooned in the last 20 years with little regulation.

“The devil will be in the details,” Buck said at the hearing. “We will want to ensure that any interoperability mandates do not create spillover effects in result in heavy-handed regulation.”

To contact the reporter on this story: in Washington at jreid@bloombergindustry.com