The U.S. Court of Appeals for the Seventh Circuit clarified the federal standing requirements for claims brought pursuant to the Biometric Information Privacy Act (BIPA), providing a road map for plaintiffs who wish to steer clear of federal court. Given this guidance, a plaintiff should be able to keep certain BIPA claims in state court by restricting the complaint to bare statutory violations.

The latest Seventh Circuit opinion is the third in a series of standing cases issued since May 2020 that, taken together, provide guidance for where there is federal standing, and where there is not. These opinions also help plaintiffs wishing to avoid removal to federal court and protracted litigation.

Enacted in 2008, BIPA is an Illinois state statute that protects a person’s biometric identifiers, such as fingerprints and facial geometry, from misuse. The law requires entities that use and store biometric identifiers to comply with certain requirements and provides a private right of action for recovering statutory damages when they do not.

After a slow start, federal BIPA filings rose in 2020 after two opinions made filing BIPA complaints and litigating in federal court a bit easier. In 2019, the Illinois Supreme Court held in Rosenbach v. Six Flags Entertainment Corp. that a plaintiff is aggrieved under BIPA without alleging an actual injury. Then in Bryant v. Compass Group USA, Inc., the Seventh Circuit found that at least as to Section 15(b) violations—failing to obtain informed, written consent— the plaintiff suffered an injury-in-fact sufficient to support federal standing by alleging a violation of 15(b) even without “tangible consequences.”

Taken together, these cases opened the door for plaintiffs to allege BIPA class actions generally and to have those claims litigated in federal court. And, so they did; plaintiffs filed more federal BIPA claims in 2020, than in 2018 and 2019 combined.

Merely focusing on the increase of federal BIPA complaints, however, is only part of the story. Plaintiffs also file BIPA claims in state court, only to have defendants attempt to take control of the forum by removing the cases to federal court.

Indeed, a review of Illinois federal district court dockets from November 2020 through January 2021, revealed only 12 BIPA complaints filed in federal court, but at least 36 removed from state courts, indicating that defendants are steering cases to federal court more often than plaintiffs are filing them there. 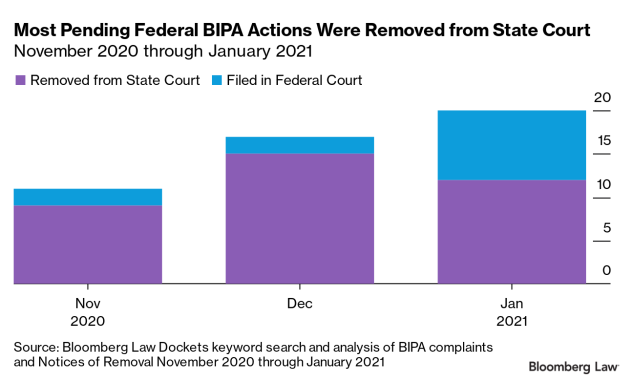 This trend of removing cases to federal court, however, may be about to change due to two more recent opinions addressing Article III standing.

In Fox v. Dakkota Integrated System, decided in mid-November 2020, the plaintiff alleged a particularized privacy interest stemming from the defendant’s improper retention of her biometric data beyond the time allowed under Section 15(a). The court concluded that for a violation of 15(a), “an unlawful retention of a person’s biometric data is as concrete and particularized an injury as an unlawful collection of a person’s biometric data.” (Emphasis in original.) Thus, the plaintiff had satisfied Article III standing.

But, then in Thornley v. Clearview AI, Inc., decided in January, the Seventh Circuit found that there was no standing in a case alleging violations of Section15(c)—which prohibits entities from selling or otherwise profiting from biometric data. In that case, the plaintiff had alleged a “bare statutory violation"—i.e., not the kind of concrete and particularized harm that would support standing—of Section15(c)—which prohibits entities from profiting from biometric data.

Taking these next two cases together, as well as Bryant, the Seventh Circuit is distinguishing between certain subsection violations that require allegations of a particularized injury, and those that just require a violation of the statute itself.

So how do these recent cases impact the future landscape of BIPA claims? Namely, can plaintiffs successfully avoid removal to federal court? For that, we need only look to Thornley where the Seventh Circuit found that there was no standing for a bare allegation of a 15(c) violation without also alleging a particularized injury (like in Fox).

Specifically, the Seventh Circuit acknowledged that the standing requirement in state court is less onerous. And, that plaintiff’s voluntary dismissal and subsequent initiation of the second, carefully crafted complaint was a valid approach. “As long as their allegations are in good faith, ... they may choose to rely exclusively on state law and avoid federal-question jurisdiction,” the appeals court said.

Thus, if plaintiffs are keen on thwarting the trend of defendants taking control of the forum, they need only follow Thornley‘s lead. And, since this means that a plaintiff can file a streamlined class action in state court for statutory damages, with less of a risk of removal and protracted litigation, they may do just that!

Bloomberg Law subscribers can find related content on our In Focus: Biometrics page.