Lawmakers head into 2019 intent on bringing high-speed internet to underserved communities across the country, an issue that may see bipartisan action in a divided 116th Congress.

Democrats and Republicans alike want to close the digital divide between rural and urban America. A federal broadband plan would create opportunities for wireless carriers such as AT&T Inc., cable providers such as Comcast Corp., cell tower companies, and others to expand into new areas.

“Any infrastructure package in the next Congress should include an expansion of broadband,” House Minority Whip Steny Hoyer (D-Md.) said in an emailed statement. Hoyer said he and his fellow Democrats are committed to working with Republicans on the issue.

Still, lawmakers may find it tough to agree on how to pay for infrastructure legislation, lawmakers and telecom analysts told Bloomberg Law.

“There is broad interest in passing an infrastructure package,” Sen. Roger Wicker (R-Miss.), the likely next chairman of the Senate Commerce, Science and Transportation Committee, said. “However, I think my colleagues on both sides of the aisle would agree that we do not yet know how we will pay for it.”

Democrats favor a broad package of infrastructure improvements, including broadband. President Donald Trump listed infrastructure as one of the issues on which he hopes to work with Congress in 2019, in remarks following the mid-term elections.

Small wireless carriers are eyeing federal funding to help them deploy in rural areas. Large carriers, including AT&T and Verizon Communications Inc., want the federal government to roll back regulatory barriers so they can more quickly deploy small cell equipment—small radio units and antennae that can be mounted to existing poles. Small cells are critical to speed and capacity for 5G networks that will support technologies such as driverless cars and the internet of things.

AT&T, Verizon, Sprint Corp., and T-Mobile U.S. Inc. are all slated to deploy 5G services in 2019. T-Mobile has said it plans to install 25,000 small cells and introduce 5G in 30 cities by early next year. AT&T, in early 2019, plans to deploy mobile 5G networks in Las Vegas, Los Angeles, and five other cities.

The FCC in 2019 will continue efforts to promote small cell deployment while Congress wrestles with a broader infrastructure plan. However, the agency faces lawsuits from cities and carriers opposed to how it wants to streamline broadband permitting. 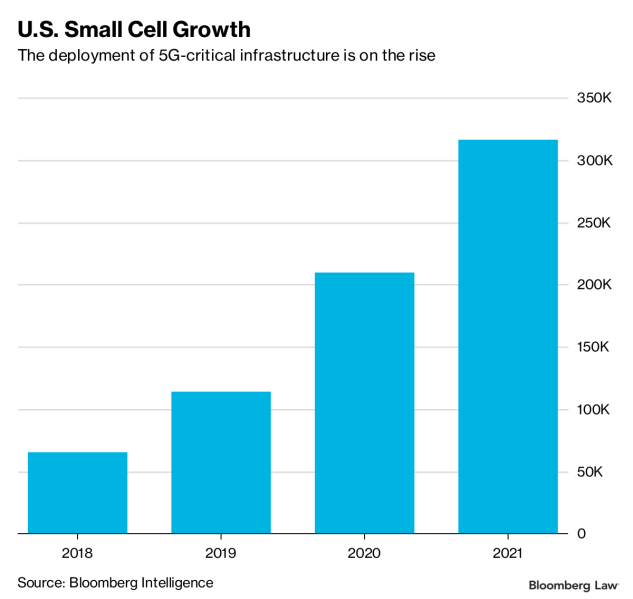 The prospects of passing broadband legislation, as part of a larger infrastructure package or as a stand-alone bill, remain uncertain.

House Energy and Commerce Committee Democrats in May 2017 proposed an infrastructure plan that would include $40 billion for broadband. Three-quarters of the funding would be used to deploy broadband in underserved areas through a national reverse auction. The rest would go to states to distribute through separate, statewide auctions, under the proposal led by Rep. Frank Pallone (D-N.J.), the prospective Democratic committee chairman in the 116th Congress.

The committee is expected to issue a similar proposal in the next Congress, a Pallone spokesperson told Bloomberg Law on condition of anonymity to discuss the matter.

Senate Democrats had released a plan in March 2018 that would invest $40 billion in direct federal funds to bring high-speed internet to underserved areas, upgrade networks, and create broadband coverage maps. The plan lists several funding options, including raising the corporate tax rate to 25 percent and restoring the top income tax rate to 39.6 percent.

Republican Sen. John Thune (S.D.) introduced a bill in June that would set deadlines for state and local action on small cell siting applications. Carriers would automatically win approval if government misses the deadline to grant or deny their application.

Trump’s February 2018 infrastructure proposal didn’t call for direct broadband funding but would have made broadband projects eligible for grants from a $50 billion rural development program.

The FCC will spend at least part of 2019 fighting a lawsuit from local governments that say the agency is overstepping its authority over public rights-of-way.

San Jose, Calif., and dozens of other cities and counties are challenging an order limiting how much they can charge carriers to process small cell applications. The order, slated to take effect Jan. 14, 2019, imposes deadlines for cities to grant or deny them.

AT&T, Verizon, Sprint, and the Puerto Rico Telephone Co. are pushing to change part of the FCC’s order to give them automatic approval of their applications in cases of missed deadlines. The order now allows carriers to sue a city for missing the deadline.

Cities argue the order will do little to bring broadband to rural communities. The order allows carriers to pay below-market rates and offers no incentives to invest in underserved areas, Shireen Santosham, chief innovation officer for Democratic San Jose Mayor Sam Liccardo, said. “The FCC model doesn’t include a plan for bridging the digital divide,” she said.

Still, the FCC under Chairman Ajit Pai has said bridging the digital divide is a priority, and members of Congress are set to work on addressing the issue.

“There is a huge bipartisan consensus that the federal government should do more to help rural areas catch up on broadband,” Blair Levin, a senior fellow at the Brookings Institution and former chief of staff at the FCC, said. How to fund it, however, will be the sticking point, Levin said.