A US army sign is pictured on a soldier's uniform at the United States Army military training base in Grafenwoehr, southern Germany, on March 11, 2022.
Photographer: Christof Stache/AFP via Getty Images

Leg tucks are out. The plank is in. And gone is the gender- and age-neutral scoring when the U.S. Army’s new combat fitness test becomes compulsory this fall.

Even with the latest revisions, the Army is still banking on lean, mean fighting machines. But this time around, the largest U.S. military service doesn’t want to disadvantage any groups and kick out valuable soldiers because they couldn’t pass the new fitness test as it was initially envisioned.

The Army’s Combat Fitness Test (ACFT) will become the test of record for soldiers on Oct. 1, after undergoing some alterations as a result of congressional scrutiny, independent assessments, and soldiers’ own experiences. 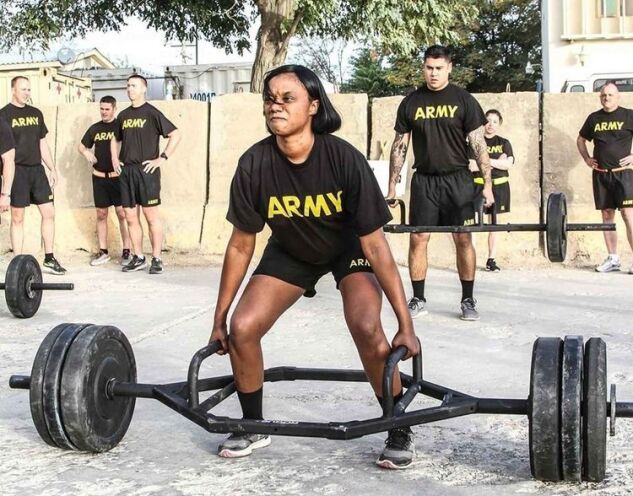 It’s the first new fitness test in more than four decades, part of a larger health overhaul aimed at making soldiers stronger, less prone to injury, and better prepared for combat in the 21st century. The change was in progress for years, but was delayed by concerns about its design, as well as by the pandemic.

“While the changes to the test are minimal, it was a thoughtful, deliberate process to ensure that we are delivering the best test for the Army right now,” Sgt. Maj. of the Army Michael Grinston said during a media roundtable.

Soldiers will begin taking diagnostic evaluations of the combat fitness test in April. That gives them six months to train before it becomes the test of record, included in administrative decisions that can determine a soldier’s career. If they fail come October, soldiers will have a chance to take the test a second time within a few months.

The ACFT, which the Army has been piloting and tweaking since 2019, consists of six exercises administered over 120 minutes: dead lifts; medicine-ball throws; hand-release pushups; sprint-drag-carry exercises; planks; and a 2-mile run.

An initial plan included only leg tucks, then evolved into leg tucks or planks. But leg tucks ended up being a weak predictor of core strength—instead testing grip and upper body strength, Grinston said.

The ACFT requires much more upper-body and core strength than the older test to more closely match on-the-ground demands, such as carrying heavy loads, extracting injured personnel from the battlefield, and pushing and loading equipment.

To pass the new test, soldiers must score at least 60 points per event, or at least 360 points out of a maximum of 600.

The scoring was initially envisioned to be age- and gender-neutral. But just like the old test it replaces, the ACFT is adopting scoring that fluctuates for different age bands and gender, according to Brig. Gen. Scott Naumann, the director of training.

For example, women between the ages 17-21 will have to lift 210 pounds in the deadlift to score 100 points, the maximum, or 120 pounds to score 60 points, the minimum, according to the Army’s scoring scales.

“It is the Army’s intent that the transition to full implementation of the ACFT will not adversely or disproportionately affect any soldier or group,” he said. The changes to the test will have “no greater impact” on recruiting and retention than the old army physical fitness test did, Naumann said during a media roundtable.

“The Army decided to implement the test as a general physical fitness assessment as opposed to one that is designed to predict performance on a set of tasks,” he said. “That is a pretty important change.”

The changes are the result of an independent analysis by the RAND Corp. Democratic Senators Kirsten Gillibrand of New York and Richard Blumenthal of Connecticut, who both sit on the Senate Armed Services Committee, led U.S. lawmakers in criticizing the initial exam because it could endanger the professional prospects of women soldiers, in particular, and hurt recruitment and retention in less physically demanding specialties in the military, such as cybersecurity, law, and medicine.

In the 2021 defense authorization bill (Public Law 116–283), Congress instructed the Army to halt implementation of the test until independent reviews were conducted.

In its analysis, RAND found that the Army didn’t have enough evidence to prove that all six test events adequately predict performance on combat tasks or reduce injury risks, or that combat task performance is a necessary metric for all Army jobs.

For example, U.S. Army Reserve and Army National Guard troops passed the ACFT at significantly lower rates, according to the Rand analysis. The Army will give the National Guard and Reserve until April 1, 2023 to start taking the ACFT for the record.

The analysis argued the Army should consider which soldiers should be held to combat standards, versus general fitness or health standards.

In particular, there was no supporting evidence that the leg tuck would predict performance. The movement’s lack of support is especially problematic given that many women are unable to complete a single repetition, according to a release issued by RAND.

“Because this test may ultimately be used for personnel actions, it is especially important that all of the test’s events and minimum standards are validated for all genders, components, and occupational specialties,” said Chaitra Hardison, a senior behavioral scientist at RAND and the lead author of the report.

By placing so much weight on physical skills that aren’t necessary for all occupations, the Army could hurt its recruiting and retention in areas such as cyber or medical personnel that are already facing challenges from the private sector, the report concluded.

Based on the report’s recommendation, the Army will establish a governance structure that will look at pass scores, injury rates, and environmental considerations, and regularly make recommendations to Army leadership based on the data, Naumann said. The first set of recommendations will go to the Secretary of the Army in April 2023, he said.

“I’m really proud that we are moving forward” with the test, Grinston said. “This is it, it’s coming.”

To contact the reporter on this story:
in Washington at rtiron@bloomberg.net

To contact the editors responsible for this story:
at ayukhananov2@bloomberg.net