Jodi Womack holds a sign that reads "We Love Our Trans Youth" during a rally at the Alabama State House to draw attention to anti-transgender legislation.
Photo by Julie Bennett/Getty Images

Conservative and religious groups are succeeding this year in their push for state laws banning transgender athletes from high school and collegiate girls’ and women’s teams, an effort opponents continue to fight in statehouses and in the courts.

In just the first five months of 2021, six states enacted laws banning transgender athletes from participating in high school or college sports. Legislators in Florida have sent a bill to Gov. Ron DeSantis (R), while lawmakers in Texas and Louisiana are debating similar legislation. The Texas House scheduled debate on a transgender sports bill (S.B. 29) for Tuesday. In 2020, only one state—Idaho—enacted a law, which is now the subject of a lawsuit.

State bill approvals signal the latest attempt by organizations including Alliance Defending Freedom to limit transgender student access to bathrooms, operating rooms, and now the athletic field. But, unlike in past campaigns, advocates of the legislation have succeeded in putting legal limits on transgender athletes. Opponents, including the ACLU, pointed to expanded Republican majorities in some state legislatures following 2020 elections and what some lawmakers see as an opportunity to leverage transgender legislation for political gain.

The bills represent a shift from targeting the LGBTQ community generally to a focus on transgender individuals specifically because 2019 polling showed Republicans could benefit politically from such attacks, Alphonso David, Human Rights Campaign president, said in an interview.

“These bills are in search of a problem that does not exist. Legislators know there is not a problem. They are using these bills as a dog whistle so that they can help galvanize their base to oppose LGBTQ people and ultimately win re-election,” David said. 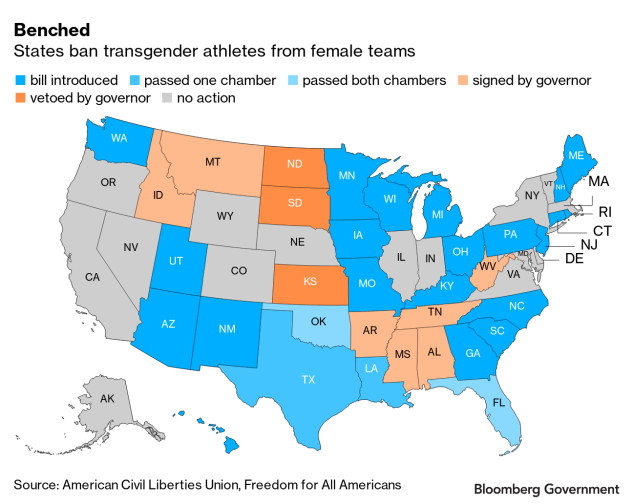 “We view this as presenting an unfair challenge to biological girls who wish to join sports teams,” Mississippi Gov. Tate Reeves (R) said at a March bill-signing ceremony for S.B. 2536. “It sends a clear message to my daughters and all of Mississippi’s daughters that their rights are worth fighting for,” he said.

The NCAA Board of Governors, in an April statement, warned championships could be pulled from locations unless “hosts can commit to providing an environment that is safe, healthy and free of discrimination.” The league’s policy requires testosterone suppression treatment for transgender athletes to compete in women’s sports and “embraces the evolving science on this issue and is anchored in participation policies of both the International Olympic Committee and the U.S. Olympic and Paralympic Committee,” the statement said.

Alliance Defending Freedom, the Heritage Foundation, the Eagle Forum, and other national organizations have pushed for the legislation, and have begun to find success in state legislatures across the country.

“These organizations are building good, deep relationships with state legislators, and either helping them construct the bills or introducing them to people in their states who can construct the bills,” said Heron Greenesmith, Political Research Associates senior research analyst and a Boston University School of Law adjunct professor.

In addition to the states with new laws, lawmakers in at least 31 states introduced legislation this year to restrict or prohibit transgender students from joining girls’ and women’s sports teams at public schools, according to data from the American Civil Liberties Union and Freedom for All Americans, two groups opposed to the legislation.

Many of the bills carry names such as “Fairness in Sports Act” and possess similar language, hinting model language is circulating among state legislators. Generally, the bills state that interscholastic, intercollegiate, or club athletic teams sponsored by a public high school or university must be designated as boys, girls, or co-ed or mixed. The language extends to private schools whose teams compete against public schools. ADF is frequently asked to offer or review bill text, but lawmakers make proposals their own, said Christiana Holcomb, ADF legal counsel.

Several bills allow students to file lawsuits against schools violating the laws for injunctive relief and financial damages. Disputes over an athlete’s sex are resolved by a physical anatomical examination or testosterone-level testing, according to many bills.

The sports-team ban isn’t the first legislation aimed at limiting transgender student activity, but for supporters of the sports-teams legislation 2021 has been by far their most successful year.

North Carolina enacted legislation in 2016 requiring students in public schools to use bathrooms corresponding to the sex listed on their birth certificates. But legislators in each of the 16 states attempting during 2017 legislative sessions to enact similar bathroom bills failed to guide the legislation into law, according to a National Conference of State Legislatures analysis.

Then came the bills to prohibit transgender athletes from girls’ and women’s sports teams.

“The messaging sounds nice, ‘protecting our women and girls,’ but they are failing to protect our most vulnerable girls—those who are transgender and need opportunity just like everyone else,” said Arli Christian, ACLU campaign strategist.

Brandon Boulware, a corporate lawyer and father to a transgender athlete, in testimony before the Missouri House said if legislators approved an amendment to H.B. 1141 banning his child from participating on girls’ volleyball and tennis teams in Kansas City, they risked sapping the student’s confidence and happiness.

“I ask you, please, don’t take that away from my daughter or the countless others like her who are out there. Let them have their childhoods,” Boulware said.

Bill opponents, many of whom are Democrats, said during legislative debates across the country the motivation for introducing the bills was a Republican push to appeal to social conservative voters and prohibit practices that rarely if ever occur.

“It’s not an issue now, but we sit here every day and we take preemptive measures to avoid conflicts and heartache,” state Sen. Beth Mizell (R), a sponsor of Louisiana legislation, said during May 5 debate on S.B. 156. “What I’m asking for is a pre-emptive measure,” she said.

The Louisiana High School Athletic Association’s policy already stipulates that students “compete in the gender of their birth certificate unless they have undergone sex reassignment.”

“It was near impossible for us to even find a transgender athlete in the state of Louisiana to sit here and speak to you today. I find that so incredibly disheartening that they haven’t even had the opportunity,” SarahJane Guidry, executive director of the Forum for Equality, an LGBTQ advocacy group, told the Louisiana House’s education committee.

And others claimed the measures could do more harm than good. The bill could decrease tourism revenue and dent the state’s accommodating reputation, said Tennessee Rep. Gloria Johnson (D) during debate over H.B. 3. The chances the legislation would survive a legal challenge are slim and the bill is hurtful to youth, she said.

“This bill shames kids for something they have no control over,” she said.

The nation’s first transgender-athlete ban in Idaho (H.B. 500), was challenged in trial court and later appealed to the U.S. Court of Appeals for the Ninth Circuit, which heard oral argument May 3. Whichever side loses may seek review by the U.S. Supreme Court.

“We are absolutely preparing litigation, and we expect to be successful,” ACLU’s Christian said. “We are prepared to fight. We fought in the state legislatures and where we didn’t win those we will fight in the courts,” she said.

LGBTQ advocates said legislation at the state level is likely to continue, with the next wave perhaps focused on prohibiting individuals younger than 19 years old from receiving gender reassignment surgery. Arkansas this year became the first state to prohibit the surgeries, though 20 states also introduced similar bills, according to the ACLU.

—With assistance from Andrew Kreighbaum