Special prosecutor Jerry Blackwell painted George Floyd’s death in police custody through the eyes of witnesses as young as 9 years old on Tuesday, the second day of testimony in the trial of former police officer Derek Chauvin.

It was “kind of stopping his breathing. It was kind of like hurting him,” said the witness, whose identity wasn’t revealed.

At his firm, Blackwell represents large corporations such as General Mills Inc., ConAgra Foods Inc., and 3M Co. While he typically defends corporations in complex civil cases, Blackwell’s pro bono work has centered on racial injustice and the rule of law. 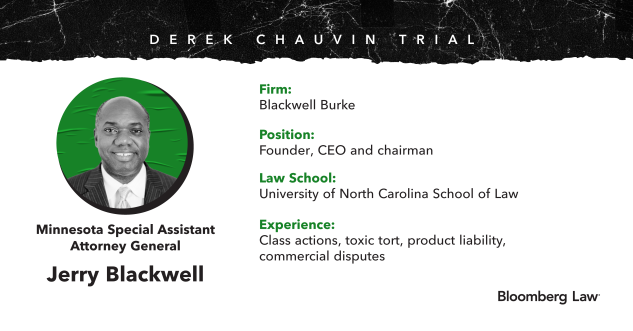 Amid nationwide protests last summer against racist police brutality, Blackwell convinced a panel of government officials to posthumously pardon a Black man who was wrongly convicted of raping a White woman a century earlier.

Minnesota Attorney General Keith Ellison, along with the state’s governor and the chief justice of its Supreme Court, granted the pardon. A month later, Ellison named Blackwell to the team of special prosecutors for the trial of Chauvin, the former Minneapolis police officer charged with Floyd’s murder.

Max Mason was one of several Black men accused of raping Irene Tusken in Duluth in 1920. Three of the accused were lynched. Mason received a 30-year prison sentence, although he was released after five years on the condition he never return to Minnesota.

Mason’s case was like those of Floyd, Emmett Till, and other Black men who were viewed through a racist lens that stereotypes them as dangerous and deserving of imprisonment, subjugation, over-policing, or “worse, as we have all recently seen on live television,” Blackwell said during the June pardon hearing.

“They also have in common that they give rise to a common skepticism, if not cynicism in the people, that the rule of law itself is hijacked by racism, and that it then plays a role in the aiding and abetting the subjugation or killing of Black and brown people with impunity—giving cover to what is wrong rather than moral justice for what is right,” he said.

‘What He Should Have Done’

Through the first two days of witness testimony in the Chauvin trial, defense attorney Eric Nelson sought to emphasize the chaotic nature of the scene as former Chauvin attempted to detain Floyd amid angry, shouting bystanders. Blackwell and other prosecutors used the minor witnesses to paint the picture of a pleasant neighborhood traumatized by the death that sparked nationwide protests and calls to hold the police officers on the scene criminally responsible. 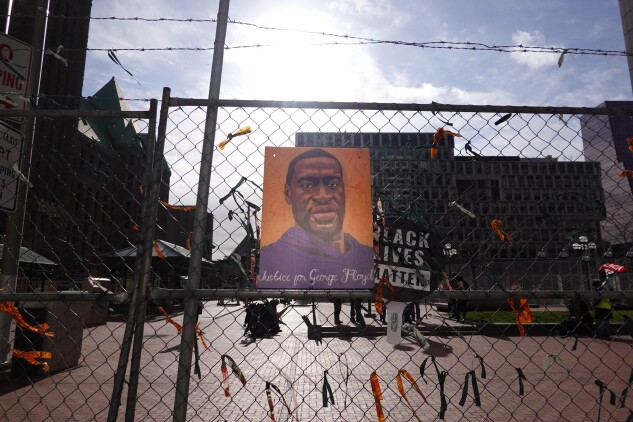 A picture of George Floyd hangs on a fence that surrounds the Hennepin County Government Center on Tuesday as the trial of former Minneapolis police officer Derek Chauvin continues.
Photographer: Scott Olson/Getty Images

Blackwell asked the first young witness, who was 17 years old last May, but is 18 years old now, how seeing Floyd’s death impacted her life. This witness filmed the viral footage of Floyd’s death.

“There have been nights I stayed up apologizing and apologizing to George Floyd for not doing more and not physically interacting and not saving his life. But it’s like it’s not what I should have done, it’s what he should have done,” she said tearfully, adding that she sees many family members and friends in Floyd because “they are all black.”

“I look at how that could have been one of them,” she said.

The question came after Nelson asked how her footage going viral changed her life. Nelson had mentioned during witness questioning the outside noise and danger surrounding the neighborhood and scene of Floyd’s death.

Like the Mason pardon, Chauvin’s televised trial for Floyd’s death represents an opportunity to rehabilitate the criminal justice system in the eyes of some people of color who may have lost faith in it, said Uzodima Franklin Aba-Onu, president of the Minneapolis Association of Black Lawyers. Blackwell co-founded that group in 1995.

“For Black folk in the community, having somebody who looks like them on the prosecution team speaks volumes,” Aba-Onu said.

Although Blackwell has focused on civil law, knowing how to present a story and interact with juries and judges are universal skills, Aba-Onu said.

“Jerry is a brilliant lawyer who can take on anything,” said Minneapolis litigator Lateesa Ward, who has known Blackwell for more than 30 years.

Blackwell’s Tuesday questions to witnesses come after the special prosecutor delivered opening remarks on Monday for the state, which he centered around the viral footage from May 25 and the importance of police conduct, noting that a number of bystanders called the police to report other police officers.

In echoing Blackwell’s theme, Donald Williams, a self-described martial arts expert who witnessed Chauvin kneeling on Floyd’s neck, noted he himself “did call the police on the police.”

“I believe I witnessed a murder,” Williams said.