Migrants outside a bus station near the US-Mexico border in El Paso, Texas, on Dec. 20, 2022.
Photo: Eric Thayer/Bloomberg via Getty Images

Sen. Kyrsten Sinema is planning to keep the pressure on immigration talks in the next Congress, starting with a trip to the US-Mexico border with other lawmakers.

The Arizona senator, who left the Democratic Party to become an independent earlier this month, outlined her plans Wednesday in an interview with Bloomberg Government. She and Sen. Thom Tillis (R-N.C.) recently hashed out an immigration framework that failed to come together during the lame-duck session.

“We ran out of time in these last couple days before the holidays, but we will be coming back strong in January, continuing to build bipartisan support for our framework,” Sinema said.

Immigration and border security, always thorny topics on Capitol Hill, have become even more complicated in recent weeks. The Biden administration is preparing to end pandemic-era asylum restrictions known as Title 42—though the Supreme Court is now weighing the policy’s fate.

The framework Sinema crafted with Tillis proposes spending more than $25 billion on border security, providing pay raises to Border Patrol agents, extending Title 42 for at least a year, creating regional centers to swiftly process asylum claims, and providing a pathway to citizenship for 2 million immigrant “Dreamers” who came to the US as children.

Senate colleagues were wary of the proposal earlier this month, with some expressing interest but refusing to pledge support until they learned more details. Sinema and Tillis spoke with lawmakers again about the proposal on the Senate floor on Tuesday, and are planning a congressional delegation with Democrats and Republicans to the border next month, she said. 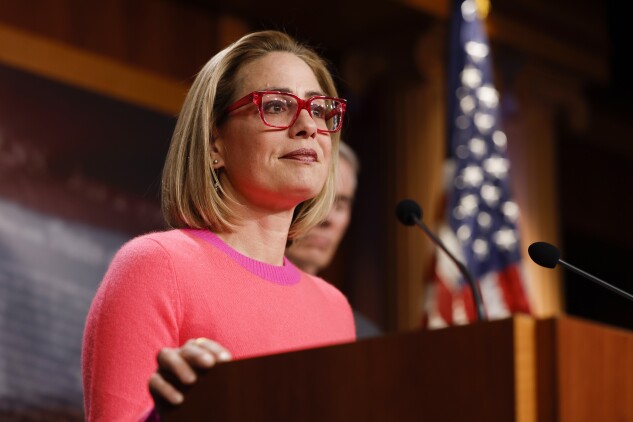 Any legislation that seeks to offer a citizenship path to undocumented immigrants faces a steep climb next year in the GOP-controlled House, where leaders have pledged to focus on border security. Sen. Mike Rounds (R-S.D.), who helped strike an unsuccessful deal on Dreamers in 2018, said Sinema and Tillis would need to get House Republicans on board early for their proposal to get traction.

“This is too big for something to just go over like, ‘Take it or leave it,’” he said. He added, however, that he’s open to the discussions despite political headwinds. “You can’t give up when you’re talking about archaic laws right now that need to be repaired.”

Sinema said she’s already engaged with Republicans and Democrats in the House on the immigration framework.

Immigration Pitch Gets Cautious Reception With Details in Flux

“We are preparing for what we expect to be a growing crisis in the next coming weeks, and we want America to understand that there is a bipartisan coalition that is looking for solutions, and we intend to grow support and ask for a vote on our measure,” Sinema said, referring to the potential expiration of Title 42.

The Biden administration anticipates at least a temporary spike in migrant crossings when the public health authority ends.

Sinema added lawmakers can build on their success in passing bipartisan measures during this session of Congress. She was a key player in negotiations on the bipartisan infrastructure law and gun safety legislation, among other measures. Still, getting bipartisan immigration legislation off the ground in a divided Congress would be a herculean task.

“I’m not optimistic,” said Sen. Bob Menendez (D-N.J.), who previously raised concerns about the Title 42 extension and other provisions in the Sinema-Tillis framework. A group of three House Democrats also spoke out against the proposal.

Sen. Lindsey Graham (R-S.C.), who played a leading role in previous immigration talks, said he wants House Republicans to pass a border security plan first, and then “I’d be willing to sit down and talk to people.”

Sinema framed border security and status for Dreamers as a package deal but indicated she was open-minded about strategy.

“I am always agnostic in terms of strategy,” she said. “I will do whatever it takes to get things done and solve problems.”