President signed legislation Thursday making Juneteenth a federal holiday to commemorate the end of slavery in the U.S., with most U.S. government employees granted paid leave on Friday.

“Great nations don’t ignore their most painful moments,” Biden said during a ceremony at the White House with Vice President . “They embrace them.”

The act establishes the first new federal holiday in nearly four decades, and comes after more than a year of a national racial reckoning sparked by police killings of Black Americans. Juneteenth marks the day when the last enslaved African Americans were ordered freed after Union troops arrived in Galveston, Texas, three years after the Emancipation Proclamation. 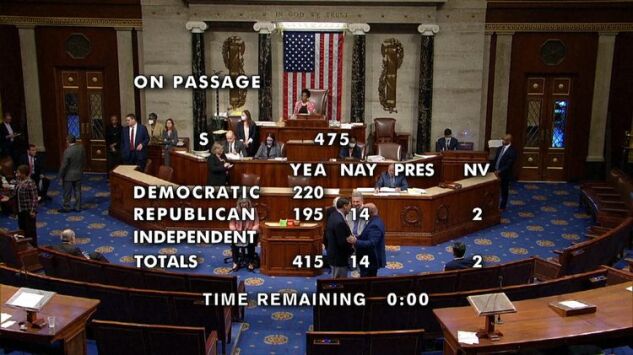 The measure to establish the Juneteenth National Independence Day passed the U.S. House by a vote 415-14 yesterday.
Source: Bloomberg)

The law will force U.S. employers to decide whether to give their workers a paid day off. Many companies and union contracts peg their holiday schedule to the federal calendar, which will now recognize 11 holidays per year. When June 19 falls on a weekend, as it does in 2021, the holiday will be observed on either the Friday before or the Monday after Juneteenth.

Momentum for the holiday built quickly through the week, after the Senate passed the legislation without dissent on Tuesday and the House followed with a 415-14 vote the next day. The law had long been championed by Senator , a Texas Republican, in addition to Democrats.

“I’m especially pleased that we showed the nation that we could come together as Democrats and Republicans to commemorate this day with the overwhelming bipartisan support of the Congress,” Biden said. “I hope this is the beginning of a change in the way we deal with one another.”

The effort was also boosted by companies including , , and , which said they would give employees time off or bonus pay to commemorate the holiday in the wake of last year’s protests against police violence. While 47 states and the District of Columbia already recognize Juneteenth, few companies or local governments previously designated it as a paid holiday.

U.S. stock markets are expected to remain Friday because of how quickly the legislation passed through Congress, according to people familiar with the decision-making process. Any such move will require discussions and coordination among several market participants, including the New York Stock Exchange, Nasdaq, regulators and financial firms, the people said. 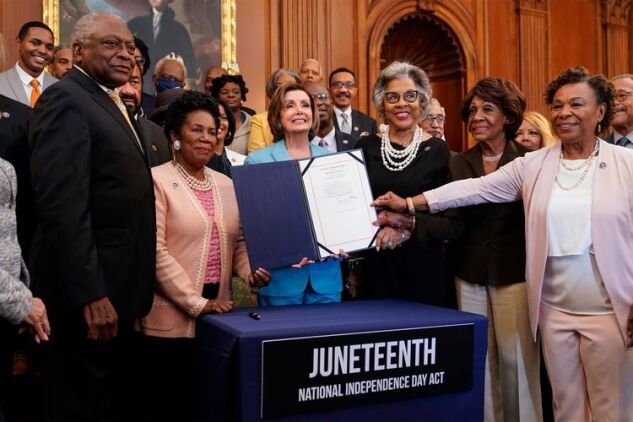 Across the federal government, agencies quickly sought to determine who would and wouldn’t be working and what functions would continue. The Office of Personnel Management, which oversees the civilian workforce, tweeted that most federal workers would have the day off.

With no official word from the Administrative Office of the Courts, it was left to individual district courts to decide whether to remain open. Federal courts in New Jersey will be closed, while those in Atlanta will be open, according to announcements on their websites. The courts in Delaware, which handles many disputes between corporations, and New York haven’t yet posted announcements.

As Biden prepared to sign the measure, the Postal Service hadn’t announced whether there would or wouldn’t be mail delivery on Friday.

“With this step Congress is ensuring that one of the most momentous events in our history, particularly Black Americans, for 150 years now is officially recognized and it is enshrined in our history books and it takes its place of honor in our nation,” House Speaker said Wednesday on the House floor before the vote.

Support for the holiday was not unanimous in the lower chamber, with more than a dozen Republicans objecting to the legislation and painting it as part of a Democratic effort to wage a culture war.

“This is an effort by the left to create a day out of whole cloth to celebrate identity politics as part of its larger efforts to make Critical Race Theory the reigning ideology of our country,” Republican Representative of Montana said in a statement.

GOP Representative of Louisiana said that while he was voting for the bill, he believed Democrats were using the legislation as “a trap for conservatives.” He said that by establishing the holiday formally as the “Juneteenth National Independence Day,” Democrats sought to draw GOP objections to “the co-opting of ‘Independence Day,’” which is already used for July 4.

“Why not be named the Juneteenth National Emancipation Day?” he said.

The holiday also became a political flashpoint last year when Former President drew widespread criticism for scheduling his first political rally since the coronavirus outbreak on June 19 in Tulsa, Oklahoma, where in 1921 a White mob destroyed a Black business district and massacred residents. Amid the uproar, he rescheduled it for the following day.

Cornyn has sponsored a resolution to commemorate Juneteenth every year since 2011. He co-sponsored legislation to make the date a federal holiday last year, but it was blocked by Senator , a Wisconsin Republican, who objected to the cost of giving federal workers another paid holiday.

This year, Cornyn joined with Senator of Massachusetts to sponsor the legislation making it a federal holiday in the Senate, along with in the House. The growing recognition of the need for a national reckoning on race helped push it toward passage.

The Senate was able to act unanimously after Johnson dropped his objection.

“Although I strongly support celebrating Emancipation, I objected to the cost and lack of debate,” Johnson said in a statement Tuesday. “While it still seems strange that having taxpayers provide federal employees paid time off is now required to celebrate the end of slavery, it is clear that there is no appetite in Congress to further discuss the matter.”