Raymond Garvin has worked with the Center for Heirs' Property Preservation for several years.
Photo from the Center's collection.

Joe Hamilton, who manages a 26-acre tree farm in South Carolina, knows first hand how complex it can be to own land: His is among many Black, Appalachian, Native American, and Hispanic families to grapple with heirs’ property—a type of collective ownership passed down, often to multiple relatives, without a will.

The 68-year-old spent three years tracing his family tree to identify the other part-owners of his family land, sorting through documents, cemeteries, and Bibles. The land originally belonged to his great-grandfather, a freed slave who received almost 888 acres from a former slave owner.

The land passed through generations to Hamilton, leaving him to resolve its legal status. Over time, much of the land had been lost, stolen and bartered as his ancestors lacked rights, along with the necessary equipment and animals to farm. Just 44.4 acres remained when it was eventually divided between seven family members.

“Many Black land owners do not trust the process,” Hamilton said. “The reason that heirs’ property is so prevalent is we have been taken advantage of.” 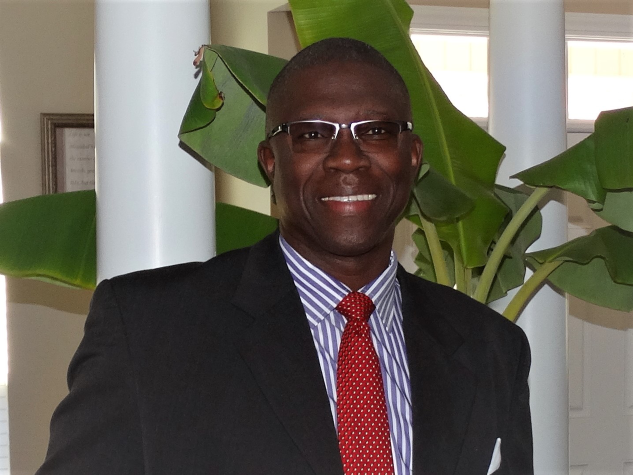 Joe Hamilton spent three years tracing back his family tree before finally being able to resolve the family’s heirs’ property issues. Now, he hopes to teach others about the process.
Photo courtesy of Mr. Hamilton.

Heirs’ property operators, lacking clear ownership, can’t qualify for certain federal programs, receive disaster assistance or use their land as loan collateral. Those hurdles have contributed significantly to farmers losing their land, with more than 60% of all Black-owned land estimated to be heirs’ property, according to the Federation of Southern Cooperatives/Land Assistance Fund.

Black farmers like Hamilton and other producers struggling with heirs’ property ownership now want President-elect Agriculture Department and its new secretary to help them find ways to hold onto their land. Congress and the agency offered some remedies in the 2018 farm law (), but legislators and advocates say more assistance is needed.

There are only about 45,500 Black agricultural producers—1.3% of the total number of producers, the most recent agricultural census data show. A century ago, 14% of American farmers were Black.

He described the past few years as the “golden age” of interest in heirs’ property, pointing to many families hiring lawyers to change their land ownership. To do so, every part-owner of the property must agree, Mitchell said.

“Especially with heirs’ properties in communities of color, by the time it’s now in its third generation, you’re not talking two people,” said Mitchell, a 2020 fellow at the John D. and Catherine T. MacArthur Foundation. “You’re talking 10, 20, 50, 100, 200, and it just takes the inability to get one.”

He was the principal drafter of the Uniform Partition of Heirs Property Act, which aims to protect families from those seeking to acquire a small share of their heirs’ property in order to file a partition action and force a sale. Seventeen states and the U.S. Virgin Islands have enacted the law.

“People hang onto it because it’s important to their family,” Schelhas said. “They know their relatives worked really hard to get ahold of the land at a time when it was really hard for African Americans to buy land and to hold onto land.”

Hamilton said the value of his land isn’t just monetary, and described how his great-grandfather signed a piece of paper with an “X” to assume ownership of the property because he had no education. The land, and Hamilton, are both part of his legacy.

“Every material thing has a price, but there are some things, ma’am, that you just cannot buy,” he said. 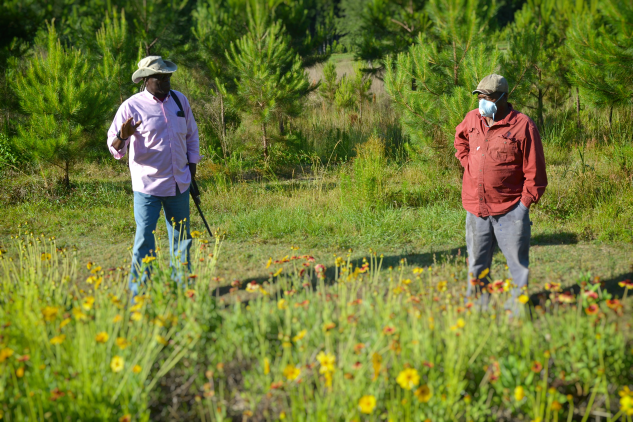 Heirs’ property operators looking to clear their titles got some relief from the 2018 farm law, which empowered the Farm Service Agency to give money to intermediaries, such as banks, for loans. The law also extended their eligibility for obtaining Agriculture Department farm numbers that the agency uses to identify farms for access to its programs.

To ensure farmland stays in the right hands, “we created the heirs property program in the 2018 Farm Bill and funded it for the first time last year,” said House Agriculture Appropriations Subcommittee Chairman (D-Ga.). Regulations for the lending program will be published soon, an Agriculture Department spokesperson said.

“If you don’t have clear title, what are you going to use for collateral?” Stephens said. “These are people who are already having financial difficulties because they’re land-rich, cash-poor.”

Instead of providing loans to individuals, the government should offer grants to nonprofits that help families resolve their titles, becoming a forgivable loan if the heirs’ property owners keep their land for a certain period of time, she said.

The measure would establish an independent civil rights oversight board to review appeals of civil rights complaints filed against the Agriculture Department and investigate reports of discrimination.

It would also boost the funding authorization for the lending program created under the 2018 farm law, and provide money to offer free legal assistance to Black farmers. The legislation would form and fund a new bank to provide financing and grants to Black farmer and rancher cooperative financial institutions, and create an Equitable Land Access Service within the Agriculture Department to obtain farmland and provide grants to existing and aspiring Black farmers, among other policies.

The legislation would lead to “a programmatic transform of how the government deals with Black farmers and reparations,” along with heirs’ property, Savi Horne, executive director of the North Carolina Association of Black Lawyers Land Loss Prevention Project, said.

Horne credits the recent rise in the population of Black farmers to the past three farm bills, work by nonprofits, and shifts happening within the Agriculture Department, adding that the agency now could focus on boosting participation and resources for socially-disadvantaged farmers. 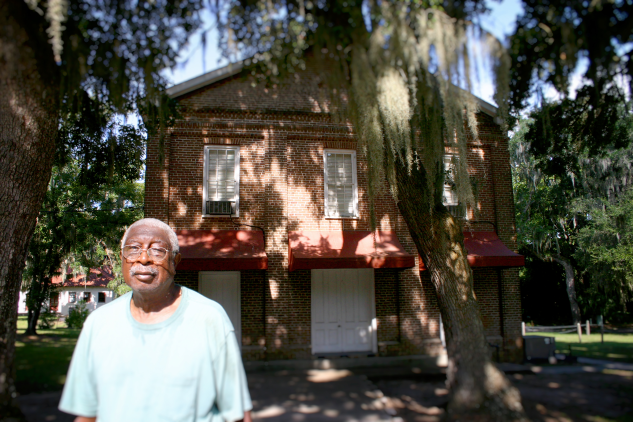 Acie Johnson is a legal client of the Center for Heirs’ Property Preservation. The Center cleared his title (from Heirs’ Property) and put his house in order. Johnson was able to refinance his loan and settle the future of his house in his will. He stands in front of his church, the Brick Baptist Church on St. Helena Island, S.C.
Photo from the Center’s collection.

House Agriculture Committee member (D-U.S. Virgin Islands), who represents an area with a history of farming and land ownership struggles, said she hopes Biden’s Agriculture Department makes it a priority to support Black farmers, “recognizing that there were past wrongs done.”

Plaskett pointed to two federal programs: one that aids beginning farmers and ranchers through mentoring and education and another that conducts outreach and technical assistance for socially disadvantaged agricultural producers and foresters.

Hamilton himself plans to pursue a law degree and eventually provide free legal advice to people with heirs’ property issues, with the contingency that those he helps then help someone else. He said he wants to assist Black land owners and farmers in breaking the cycle of loss.

Democratic contenders to head the agency include former Sen. (N.D.), former Agriculture Secretary , Reps. (Ill.) and (Ohio). If chosen, Fudge would be the first Black woman to fill the role.

“I’m hoping at the very least there would be an agriculture secretary who would have his door open for us,” Boyd said. “That’s where change comes in.”

To contact the reporters on this story: in Washington at mboyanton@bgov.com; Elizabeth Elkin in New York at eelkin4@bloomberg.net

To contact the editors responsible for this story: at rmeszoly@bgov.com; at csaenz@bloombergindustry.com