Protesters attend a rally for "Fair Maps" in 2019 coinciding with the Supreme Court hearings in landmark redistricting cases out of North Carolina and Maryland.
Photo by Tasos Katopodis/Getty Images

Republicans argue that the increase in recent years in Black U.S. House members representing White-majority districts means racially polarized voting is on the decline and therefore districts no longer must be drawn with racial considerations. The move sets up likely legal fights and a potential pivot point in how district lines are drawn.

“We’re telling Republicans in charge of redistricting that the decision whether to use or not use racial demographic data must be made on a state-by-state basis,” said Jason Torchinsky, senior adviser and general counsel to the National Republican Redistricting Trust, a group that helps coordinate GOP redistricting efforts. “But if such an analysis isn’t required by the Voting Rights Act, then lawmakers shouldn’t be using racial data to draw their lines—otherwise it opens them up to a Fourteenth Amendment challenge.”

GOP state legislators have done just that in multiple states over the past couple of weeks. In Texas, state Sen. Joan Huffman (R), chair of the Senate Special Committee on Redistricting, said the proposed map passed last week was “drawn blind to race, then later we checked to make sure that the opportunity districts in existence were protected, and we saw that they were.”

In debate over Arkansas’s four proposed congressional districts, state Sen. Jason Rapert (R), chair of the committee with jurisdiction over redistricting, said GOP leaders and staff “have done our best to not have any discussion” about race. “I have not pulled any numbers on racial statistics,” he said. 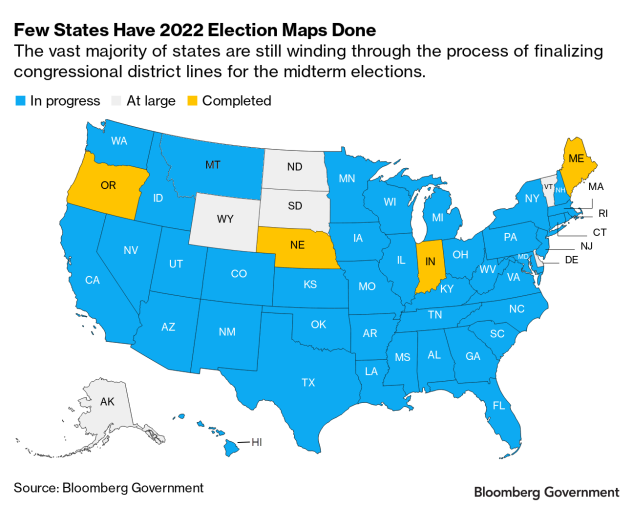 The Republican strategy endangers one of Democrats’ strongest weapons against Republican gerrymandering: the Voting Rights Act.

Democrats may now sue at their own peril, said Guy-Uriel E. Charles, a Harvard Law School Professor. The conservative U.S. Supreme Court has pared back the power of the Voting Rights Act, and in future litigation it could support the Republican argument, making federal law mostly useless in challenging racial gerrymandering.

“Once the Republicans have confirmation from the Supreme Court that Section 2 of the Voting Rights Act is only violated where there’s intentional use of race to violate the voting power of voters of color, then you’re home free,” he said.

Democrats contend this GOP strategy can’t work because legislators still bring their knowledge about state demographics to the map-making process even if data on race isn’t used in redistricting software.

VIDEO: We talk to former U.S. Attorney General Eric Holder and Loyola Law School Professor Justin Levitt about the long history of the fight over who draws the maps.

“First, let’s dispel the notion that legislators don’t understand the demographics of the communities across their state, which they purport to represent,” Marina Jenkins, Director of Litigation and Policy, at the Democratic Party aligned-National Redistricting Action Fund. “But even if you were to accept the premise that ‘turning off’ certain data during the official mapping process makes map-drawers suddenly blind to those realities, you cannot escape the fact that the end result of a so-called ‘colorblind’ strategy has been the splitting of communities of color, and, in turn, diluting their voices in our democracy.”

But in order to fight the GOP, Democrats must sue in a federal court system that’s been increasingly hostile to the Voting Rights Act, Charles said.

Litigation could give the Supreme Court the ability to rule that racial data shouldn’t be taken into account unless there’s evidence of White racially polarized voting behavior, Charles said, which would be the “death knell of Section 2 of the Voting Rights Act.”

“The real move is saying to the plaintiffs, ‘Go ahead and sue us,’” Charles said. “They’re betting some group out there is going to do this, and there’s a 50/50 chance that the conservatives are right.”

To contact the editors responsible for this story: at ktrygstad@bloombergindustry.com; at broth@bgov.com