More than a third of U.S. states enacted new restrictions on police power or oversight of law enforcement actions in the months after George Floyd’s death, with additional legislatures diving into the politically fraught issue this year.

Minnesota and 13 other states banned the type of chokeholds that led to Floyd’s death outside a Minneapolis convenience store. And the state where Floyd died led the way in requiring officers to step in when they see excessive use of force by a fellow cop—a movement mirrored in at least 10 other states.

“The killing of George Floyd was a watershed moment,” said Scott Wolfe, Michigan State University associate professor of criminal justice. “The amount of policy changes and discussions of law changes concerning how the police interact with the public is like we’ve never seen in the past.”

Floyd, a Black man, died May 25, 2020, as a White Minneapolis officer, Derek Chauvin, knelt on his neck for more than seven minutes.

Floyd’s death triggered Black Lives Matter protests nationwide and a call for changes in laws regarding how police interact with citizens. But it also fueled a political backlash in some circles, and skepticism about whether the legal changes go far enough to make any real difference.

The Minnesota State Legislature convened a special session in July 2020 and in eight days approved legislation that—in addition to the chokehold ban and duty-to-intervene obligation—adopts an independent use-of-force investigation after any death involving an officer, and creates a database to track alleged police misconduct.

A slew of other changes included a ban on warrior-style training “intended to increase a peace officer’s likelihood or willingness to use deadly force in encounters with community members.” Gov. Tim Walz (D) signed the bill into law July 23.

In Colorado, one of the nation’s most comprehensive police-accountability laws was introduced in the state Senate just nine days after Floyd’s death, sailed through both chambers, and was quickly signed by Gov. Jared Polis (D). 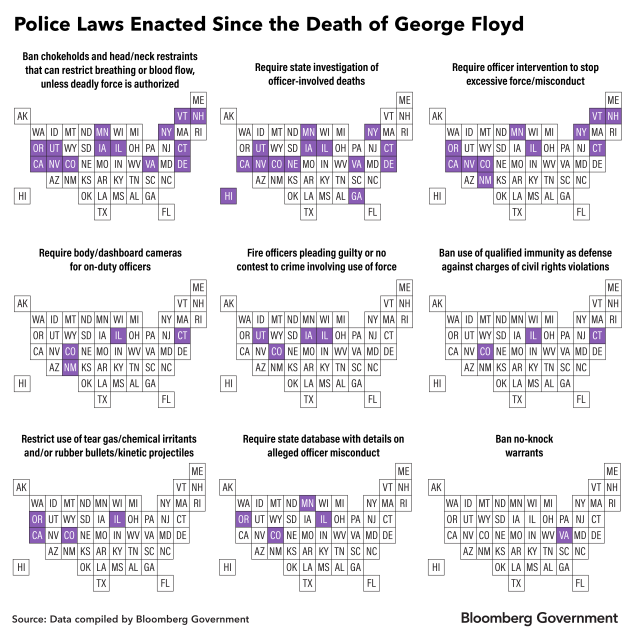 It bans chokeholds, requires body cameras, limits tear-gas use, bars deadly use of force for nonviolent offenses, and bans a qualified-immunity defense for an officer charged with a civil-rights violation.

This week, Utah Gov. Spencer Cox (R) signed several police accountability bills, including one requiring a report anytime an officer points a gun or taser at a person. And the Republican-controlled Kentucky Legislature approved a measure to decertify officers who commit misconduct.

Most new state laws involving police were passed in the Midwest, West, and Northeast.

But in the South, Virginia became the sole state in the nation to ban no-knock warrants that let police enter a home without warning— a “Breonna’s Law,” named after Breonna Taylor, the Black woman shot and killed by police last March in her Louisville apartment.

And Georgia joined a dozen other states in requiring investigation at the state level of all officer-involved deaths.

One change several states have made, including comparatively conservative Iowa and relatively liberal New York, is appointing a state attorney general rather than a local district attorney to investigate violent episodes involving police.

Another widely adopted change requires police who witness an officer applying excessive force to step in.

“I don’t think of this as a new concept,” said Taryn Merkl, senior counsel at the Brennan Center for Justice at New York University Law School. “What I think is new is how widespread people seem to be embracing this as a potential area for reform. And I think it’s an important one to look at in terms of its potential power to change police culture and the need for officers to have cover from above if they do need to report another officer.”

Cities nationwide—including in the South—also stepped in, with their lawmakers and at the ballot box.

Austin, Texas, slashed police department funding to about $290 million from an initial proposed budget of about $434 million, moving several functions out of police jurisdiction and redirecting funds to support domestic-violence shelters.

In Atlanta, Mayor Keisha Lance Bottoms imposed a duty-to-intervene policy and required de-escalation tactics before police use deadly force. She signed the order after the death of 27-year-old Rayshard Brooks, a Black man shot by a White Atlanta police officer less than three weeks after Floyd died.

‘Nibbling Around The Edges’

Floyd’s killing coincided with a pandemic and already volatile presidential race, and the role of police in American society became part of the political dialogue. In some states, Republican-led legislatures pushed back against what they dubbed “defund the police” efforts.

But even some who specialize in criminal justice issues aren’t convinced the steps to curb police power will make a significant difference, especially when it comes to law enforcement interactions with people of color.

Black men in America are about 2.5 times more likely than White men to be killed by police, according to a 2019 study published in the Proceedings of the National Academy of Sciences. Research shows that “one in every 1,000 Black men will die at the hands of police,” Merkl said.

“I think the laws we have seen so far, especially the legislation that has passed, has been more nibbling around the edges,” said Seth Stoughton, a South Carolina School of Law associate professor, who is listed in court documents as a possible witness in the Chauvin trial. “And I think that’s largely because of the political process.”

“There’s no one answer,” said David Alan Sklansky, a criminal law professor at Stanford Law School. “We need to be doing a lot of other things which, quite frankly, aren’t being done enough almost anywhere in the country.”

Fundamental changes not addressed by most states would include redefining the role of police to decrease law enforcement responsibilities, especially in dealing with the homeless and mentally ill; changing how police are hired and police departments are held accountable for wrongdoing; and decriminalizing low-level offenses that are now routinely handled by cops, Grunwald and Stoughton said.

“In some ways, all we’ve seen in policing is incremental change,” Stoughton said. “I am of the view that policing is substantially better today than it was 50 years ago, despite the fact that we have many of the same issues. If we keep our attention on it, if we gain a sense of political will which we have lacked, policing will be better yet in another 20 or 50 years.”