The Paycheck Fairness Act () would prohibit employers from using wage history to determine an employee’s salary, and would ban retaliation against workers for discussing pay. It would also narrow the acceptable defenses companies can cite when there is pay disparity among workers.

The bill was approved on a 217-210 vote. It previously cleared the chamber on a largely party-line vote in 2019, but wasn’t considered by the Republican-controlled Senate. 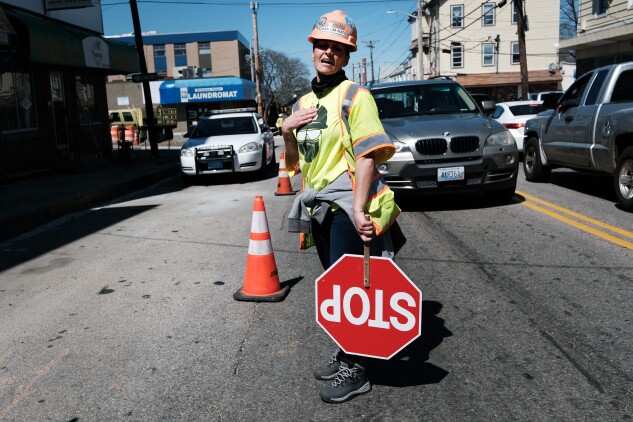 A woman works at a construction project along a road on April 9, 2021 in Pawtucket, R.I.
Photographer: Spencer Platt/Getty Images

Business groups and most Republicans in the House oppose the legislation. Its path forward is unclear in the Senate, where 10 GOP votes would be needed to overcome a filibuster. Senate Majority Leader (D-N.Y.) said in March he would seek to advance the legislation.

With narrow control of both chambers, Democrats are advancing the legislation along with a number of other workplace equity bills. The House will vote as soon as Friday on the Workplace Violence Prevention for Health Care and Social Service Workers Act (). A bipartisan group of lawmakers in February also reintroduced a bill mandating accommodations for pregnant workers ().

Current federal law allows employers to justify pay disparities by citing any factor other than sex.

“That has just been read incredibly broadly,” said Jocelyn Frye, a senior fellow at the left-leaning think tank Center for American Progress.

The Paycheck Fairness Act would require that justifications for pay disparity be limited to job-related factors such as education, training, or experience, she said.

The U.S. Chamber of Commerce warned in a letter this week that the bill would eliminate legitimate distinctions in pay. The Retail Industry Leaders Association said it was “unequivocally the wrong approach to address the gender wage gap.”

Both groups backed competing pay-gap legislation () introduced by Rep. (R-N.Y.). That bill, which Stefanik offered as an amendment to the Paycheck Fairness Act, would also ban retaliation against employees for discussing pay but Democrats say it wouldn’t include needed enforcement tools. The amendment failed 183-244.