When calls for police reform led city leaders in Austin, Texas, to approve moving more than $150 million from their law enforcement budget to housing, violence prevention, and other programs last year, backlash from Republican state officials was swift.

Gov. Greg Abbott (R) said the funding shifts adopted by the city and others following the death of George Floyd after being pinned down by a Minneapolis police officer would invite “crime and chaos” into communities. Now, he’s banded with GOP legislators to punish Texas cities that follow Austin’s lead.

Jury selection is scheduled to continue today in the trial against George Floyd’s accused killer, Derek Chauvin. Before selection began, jurors filled out a questionnaire that asked how they felt about defunding the police. Chauvin’s defense attorney Eric J. Nelson asked potential jurors who at least “somewhat agreed” with defunding the police to clarify what they meant. Many said they didn’t know enough about the campaign to form a concrete opinion. So far, nine jurors have been seated.

Resistance to the movement advocating that cities “defund” the police—or reallocate money in police budgets to social programs and others—is taking hold in Republican-led legislatures throughout the country. Bills pushed by Abbott and governors in Florida and Iowa, and moving through legislatures in states including Georgia and Missouri, would hamstring how cities allocate tax dollars to law enforcement, penalize those that defy the state, or both.

There is wide disagreement on what the phrase means, and some of the state proposals play on politics to outlaw cities from cutting law enforcement budgets beyond a set percentage, even when the state has yet to see such a local debate. Others are more punitive, allowing states to withhold funding from cities or letting taxpayers challenge police funding cuts in court.

The bills are an “incredibly new and troubling” example of state leaders stripping local governments of control, said Kim Haddow, founder of the Local Solutions Support Center, a virtual organization that works nationally on preemption issues.

“They want to punish cities for doing things they, as a matter of policy, don’t agree with,” Haddow said.

Republicans backing the measures are responding to a handful of cities that heeded the calls of activists to rethink how their police departments function following Floyd’s death and protests against police brutality. “Defunding” is based on the idea that police officers often respond to issues such as homelessness and drug addiction that could be better served by funneling money to community programs.

As the Chauvin trial got underway, the Democratic-controlled state House and Republican-controlled state Senate were working on compromise legislation that would establish a $35 million taxpayer-funded account to reimburse local governments for expenses related to extraordinary or unplanned public safety events that exhaust a local government’s budget. One bill to help local governments pay those expenses introduced by Democrats and another by Republicans failed to gain enough support, but both parties eventually conceded legislation was needed to pay for atypical public safety expenses.

“The Chauvin trial presents an urgent public safety concern,” Sen. Scott Newman (R) said in a March 9 statement. “I will not support bailing out Minneapolis to rebuild following last summer’s riots, but we also have to support law enforcement in their effort to protect the public.” 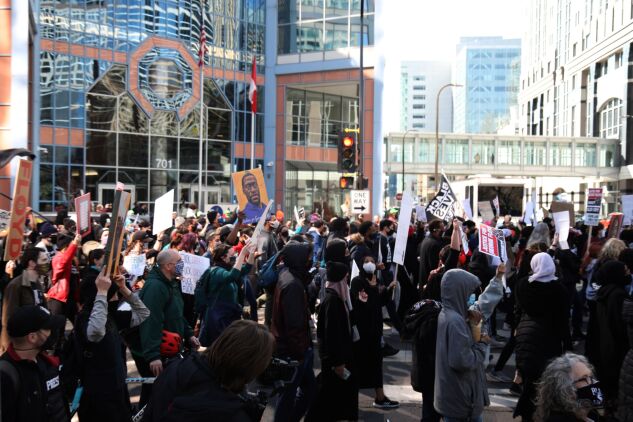 In Austin, the city council passed in August a police budget whittled down to $290 million from the $434 million slated in an earlier proposal. The budget moved police functions such as communications out of the department, redirected funding to programs including housing and violence prevention, and created a fund for “alternative forms of public safety,” according to a news release.

Top Texas lawmakers have said they will prioritize dissuading their cities from replicating Austin’s cuts. Abbott is working with the Legislature on a measure to make it “fiscally impossible for cities to defund police,” he said—a move backed by Combined Law Enforcement Associations of Texas.

“We will never turn our back on our law enforcement officers,” Abbott tweeted Jan. 23 after a discussion with law enforcement. “We will defund cities that tried to defund police.”

Republican Lt. Gov. Dan Patrick—who controls what bills can get to the Senate floor—listed among his legislative priorities a measure (SB 23) filed March 11 that would require voter approval for a local government to cut its law enforcement budget. Cities or counties that do not comply would be prohibited from raising their tax rates.

Other state leaders want to quell city-level debates before they spread. The Iowa Senate passed March 10 a measure (SF 479) to pull state funding from a local government that reduces its police budget, unless the cuts are in line with an overall budget reduction.

“That’s not going to happen in Iowa; not on my watch,” Gov. Kim Reynolds(R) said in a Jan. 12 speech. “We should never be afraid to talk about ways to improve policing, but there will be no talk of defunding the police here.”

Similarly, an Arizona bill (SB 1333) that a legislative committee passed was introduced as a deterrent to cutting police funding, sponsor Sen. David Gowan (R) said. The measure would require the state to withhold money from a city or town that reduces a law enforcement budget below the previous year’s budget, with a few exceptions.

“We don’t want to see it anywhere here,” Gowan said during committee debate over the bill.

Law enforcement groups, though, have differed in their views of the “defund” the police campaign, especially over what the phrase means.

Some officers fear that efforts to “defund” the police would take money out of their pockets, said Shawn Kennedy, information officer of the National Association of Black Law Enforcement Officers and a former sergeant in the Chicago Police Department.

“That’s not what the objective is,” Kennedy said. “But, all you need is for someone to put a particular spin on it, and incite fear to shift the purpose. If people buy into that, they’ll treat that theory as if it was the original intent.”

Kennedy added that the objective is to shift money from law enforcement to jobs they may not be equipped to handle, such as mental health calls.

Opponents of the measures to deter funding cuts argue they strip city leaders of their ability to rethink the structure of their police departments. Protecting the power of local governments was cited by lawmakers when the Republican-led Indiana state Senate on Feb. 15 rejected a police funding restriction measure (SB 42) that would have prevented cities from reducing or transferring money from law enforcement budgets.

Other statehouse proposals, if signed into law, would put long-term constraints on the flexibility of city budgets, Haddow said. Withholding state funding also would have a “chilling effect” when it comes to reforming policing, she said.

“This is punitive, it is patriarchal” Haddow said. “This is a job for city councils, not state legislatures.”

Cities can maintain their authority over police budgets since they contribute more than states—which typically put up less than 5% on average to municipal police budgets, said Arthur Ago, director of the criminal justice project at the Lawyers’ Committee for Civil Rights Under Law.

“For a state to come in and threaten to cut funding is really sort of a slap in the face to municipal governments that are trying to take control over how their local police forces are being run,” Ago said.

Cities may have resources to push back against some of the punitive proposals. Local officials typically have a lot of power over how their funds are allocated, said Paige Fernandez, policing policy adviser in the American Civil Liberties Union’s National Political Advocacy Department.

Some of the measures could also end in litigation, though it’s “unusual to see a city sue its home state,” Ago said.

Municipalities do occasionally sue states. Philadelphia and others filed a lawsuit challenging Pennsylvania’s law restricting plastic bags, and Texas border towns have sued the state over its law on sanctuary cities, for example.

—With assistance from Paul Stinson and Stephen Joyce.