Already juggling child care, student loans and rent on a solo income, Monica never imagined that the cost of staying in touch with her husband while he served a minimum 15 years in prison would be what drove her most agonizing budget decisions.

“I couldn’t tell him when I didn’t have enough money for both groceries and calls, so I would put the money on the phone first and figure out food second,” the 36-year-old said. She spoke to Bloomberg Law on condition of anonymity out of fear that prison staff could retaliate against her husband.

But phone calls, video visits and emails were the most important expenses she had as she fought to keep her family together while facing an increasingly common situation: more than 2 million Americans are in prisons and jails across the country.

Many of the 6.5 million Americans who have an immediate family member in jail or prisonare coping with the same costs, plus steep fees for money transfers—which are largely unregulated but critical for people living inside prison walls to buy basic hygiene products and other necessities.

Phone calls to prisons vary widely but run as high as $5.30 per 15 minutes, according to Prison Phone Justice, a nonprofit that advocates for lowering the cost of calls for incarcerated people and their loved ones. The average fee to wire $20 to an incarcerated person in a state-run prison nationwide is 19% ($3.80), ranging from 5% ($1) in some states to 37% ($7.40) in others, according to that study.

At the Massachusetts prison where Monica’s husband has been incarcerated for the past 13 years, emails are 25 cents apiece, both ways. Having the use of a tablet in prison is yet another charge. It adds up given that the average household income for families supporting an incarcerated person is $19,185, according to 2014 data, the most recent available.

“I have no wiggle room with money and it’s very hard to save when you’re the only source of income,” Monica said. “I fear the costs to maintain our family while my husband is still in DOC (Department of Corrections) custody will only increase as time moves on.”

The Consumer Financial Protection Bureau has started taking action against some of the companies for what they call “exploitative actions.” In October 2021 it limited the fees JPay could impose and fined the company $6 million for charging people leaving prisons fees to access money on prepaid debit cards and for requiring consumers to sign up for a JPay debit card as a condition of receiving government benefits.

“The prices for prison phone calls far outstrip the cost of calls on the regular market,” the agency said in a report in January, adding that the companies offering these services “fueled their market dominance by acquiring other service providers to prisons and jails.” 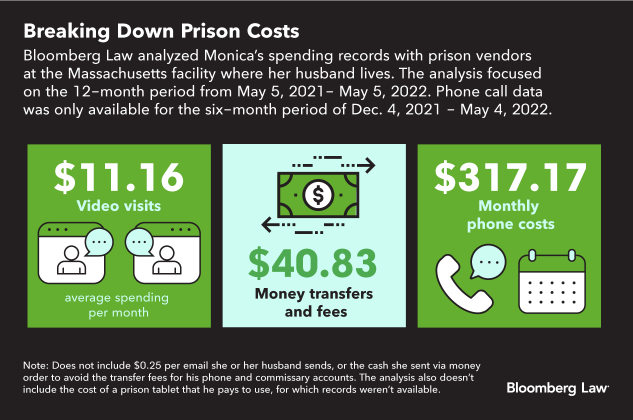 The Federal Communications Commission last year capped the price of interstate and international calls at 12 cents per minute for prisons and 14 cents per minute for jails. It also capped financial transaction fees that third-party companies like Western Union can charge inmates or their families to process payments to phone service providers at $6.95.

However, a federal Court of Appeals held that the FCC can only regulate out-of-state and international calls, not calls made within states, which comprise 80% of all calls made from jails and prisons.

“This means that, for years-long periods of time, a single firm under contract with a prison will be the only provider of a given product or service to incarcerated people and their families,” the CFPB said.

“Corrections is a troubled industry,” said Jade Trombetta, a spokeswoman for Aventiv Technologies, the parent company of Securus and JPay, which is owned by Platinum Equity. She said that the company has hired new leadership and established new goals around affordability - offering zero-commission models in contracts and lowering the cost of calls to an average of 11 cents per minute.

“Listening is important,” she said. “We have work to do, but we want to right the wrongs and ensure those we serve have access to the communication and rehabilitative tools they need.”

On the state level, New York and New Jersey regulate the cost of calls for incarcerated people. Connecticut passed a law in 2021 that prohibits charging people incarcerated in state prisons and juvenile detention centers for phone calls.

The California Public Utilities Commission capped all prison and jail calls in that state at 7 cents per minute and banned most transaction fees. New York and New Jersey also passed laws prohibiting the state or its prisons from collecting commissions from the fees charged to incarcerated people.

Bloomberg Law analyzed Monica’s spending records with prison vendors at the facility where her husband lives, finding that her average spending comes out to roughly $372 per month.

That doesn’t include the email fees, or the cash she sent via money order to avoid the transfer fees for his phone and commissary accounts. The analysis also doesn’t include the cost of a prison tablet that he pays to use, for which records weren’t available.

Money orders weren’t an option in 2020 due to the pandemic. That added $108 per month in transfers and fees—all to purchase products priced well above retail rates.

The burden of these costs falls disproportionately on mothers, wives, sisters and girlfriends.

“Women comprise 83 percent of the people shouldering court-related costs for family members. The impact on women of color is acute: while nearly one in every four women is related to someone who is incarcerated, for Black women the figure is two out of five,” the CFPB report said.

Not being able to keep in touch with incarcerated loved one also carries a societal cost. A 2008 study published in the Journal of Research in Criminal Delinquency found that incarcerated people who had more contact with their families and who reported positive relationships overall were less likely to be re-incarcerated.

“We each give our best and when things are hard we all feel it together,” she said. “Anyone at the beginning of this journey needs to know that it never gets easier and there will always be some new policy, or rule designed to rip your family apart.”

Evan Weinberger contributed to this article.

(Clarifies Jade Trombetta's role as a spokeswoman for Aventiv Technologies in the third section of the story. )