Steve Schleicher painted George Floyd as a friendly face in his community, a devoted son to his mother, as he wrapped up the state’s case against accused murderer Derek Chauvin.

Schleicher, who is no stranger to high-profile criminal cases, described in detail how Floyd struggled to breathe face down on the pavement as Chauvin knelt on his neck and back.

An attorney in private practice, Schleicher is now on the legal team prosecuting the ex-Minneapolis police officer accused of murdering Floyd.

While he was still a federal prosecutor in 2016, Schleicher played a lead role in securing a guilty plea from the man who had kidnapped and murdered an 11-year-old boy nearly three decades earlier.

The crime had haunted Minnesota for years. Revealing Jacob Wetterling’s killer was a major event for the state—and for Schleicher, a capstone to his career as a prosecutor. 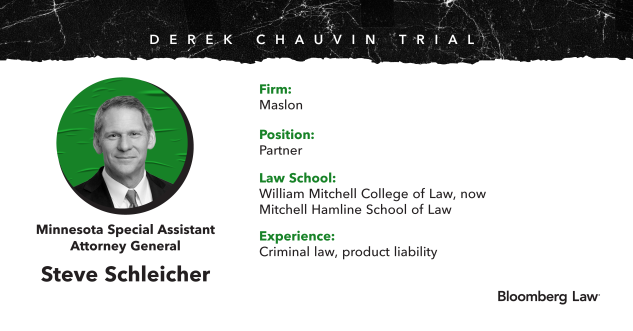 Now Schleicher, who specializes in white-collar criminal defense and product liability disputes, has the chance for a second act as a prosecutor in the trial of Chauvin.

Some of Schleicher’s most notable victories with the U.S. Attorney’s Office came via plea bargains, including in cases that resulted in multi-year prison terms for members of a Minneapolis crime syndicate, the leader of a Duluth crack cocaine ring, and an arms smuggler.

In 2016, Heinrich led authorities to Wetterling’s remains and pleaded guilty to the child pornography charges, receiving a 20-year sentence. Under Schleicher’s questioning in court, Heinrich admitted to killing Wetterling and sexually assaulting another boy.

“What Steve did with the Wetterling case was incredible,” said John Marti, a former colleague of Schleicher’s at the U.S. Attorney’s Office. “There wasn’t enough evidence to bring a murder charge, but he leveraged what evidence he had to finally give the Wetterling family some peace and ensure the defendant in the case will likely spend the rest of his life in prison.”

Schleicher excels as a trial lawyer thanks to his “unique ability” to understand human dynamics and communicate with witnesses and jurors, said Marti, an attorney at Dorsey & Whitney. Marti said that according to Schleicher, litigation is about facts and law, but trials are about people.

Schleicher convinced a federal jury in 2014 to convict a St. Paul attorney of conspiring with his brother-in-law to launder money from drug sales and obstructing a federal investigation.

But he came up short in a 2016 trial against a Minneapolis police officer accused of accused of assault, perjury, and falsifying police records. The jury found the officer not guilty on most of the charges, and prosecutors dismissed the charges that the jurors couldn’t agree on.