As the nation engages anew with race, there’s a sign of progress at large companies — Black general counsel are on the rise, now comprising more than 5% of general counsel in the Fortune 1000.

Thompson Hine senior counsel Ernest Tuckett, based in Chicago, and Eaton Corp. general counsel April Miller Boise, based in Cleveland, founded the Black General Counsel 2025 Initiative in 2017 to track and promote Black legal leaders in the Fortune 1000. The group’s initial goal for Black general counsel to reach 5% representation by the end of 2020 has been met nearly half a year early.

Companies have been “rightfully focused” on increasing C-suite diversity, and the general counsel position is a good place to start because there are many experienced Black lawyers in the industry, Miller Boise said.

“Studies continually show that diverse leadership teams drive better outcomes, and if companies are lacking sufficient diversity in their pipeline they can look to the Black GC 2025 Initiative and connect the dots back to their own needs. We want to help companies find those ready-now candidates,” said Miller Boise.

The Initiative’s next goal, and their primary focus, is to reach 10% representation in 2025, an “aggressive” but achievable milestone, according to Miller Boise and Tuckett.

Ten percent, or 100 Black general counsel, would be a far cry from what Tuckett thought was possible when he attended a Georgetown Law alumni event in 2005. He was surprised then to see that one of the general counsel speaking on the panel, Marianne Niles, was also Black.

“I didn’t know that there were people like her out there,” said Tuckett, who was an associate at Arent Fox at the time. Tuckett would go on to serve as general counsel for both chemical producer DuPont Canada Company and paint producer AkzoNobel before taking his current role with Thompson Hine.

“The assumption wasn’t that she could be or might be Black. It was a really nice ‘aha’ moment,” Tuckett said.

Veta Richardson, president and CEO of the Association of Corporate Counsel, said she has seen “a slow but steady shift” of Black attorneys into law departments and corporate leadership.

“This is more than a moral victory (although it certainly is that),” she said in a statement. “Boards and CEOs are embracing a simple fact: that competitive organizations, the ones able to attract talent and customers, are diverse and inclusive. Of course, change takes time; we’re not there yet. We must continue to make the moral and business case that diversity in legal and in the C-suite is a net gain for everyone.”

Though the numbers have risen, they’re still low. In the Fortune 100, Black lawyers only make up 4% of top legal leaders. General counsel who advocate for diversity say it’s time in-house leaders hold their own teams and their outside legal partners accountable.

“Any general counsel who believes that these issues are important, they have the power to, in the words of the late Representative Lewis, stir up some good trouble,” said Chasity Wilson Henry, the general counsel of the CECO Environmental Corp. and co-founder of the NEW Roundtable, a Dallas-based resource group for Black women in law. 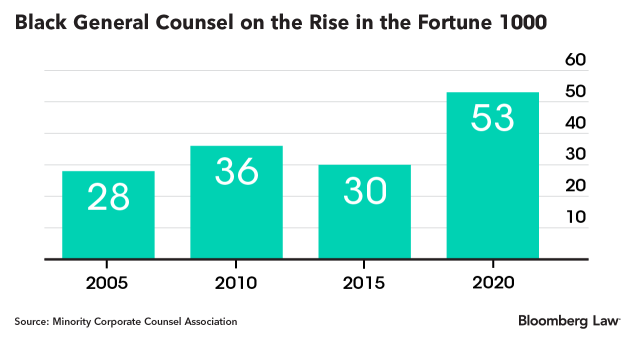 “George Floyd was not the first person to die at the hands of the police,” said Karyn Temple, the general counsel of the Motion Picture Association in Washington. “But I think the level of conversation is different. The breadth of the protests and the level of protest is different. We’ve gotten to a point that it’s not just protesting from African Americans over this issue, but everyone is saying it’s important.”

Like late Rep. John Lewis’s beating on the Edmund Pettus Bridge in 1965, or Emmett Till’s murder ten years before that, Floyd’s death has shocked the country and “spawned a call to action,” said Rick Sinkfield, the Atlanta-based chief legal officer of Laureate Education and one of the most recent additions to the ranks of Black general counsel in the Fortune 1000.

“For diversity, we don’t have to get beaten up on a bridge, but we have to do our part,” Sinkfield said. “Everybody can do better, including our company.”

This new environment makes it a good time to boldly address racial inequity in the legal industry, according to Henry and MCCA president Lee.

“Even six months ago, before the death of George Floyd, I couldn’t use words like ‘antiracist’ and I had to use softer words about being inclusive,” Lee said. “We had to talk in these long winded ways because we had to be sensitive about those who were not comfortable talking about race.”

Stronger language, Lee and Henry agreed, can spur legal leaders to take a more active role in diversity in the legal industry by requiring outside legal teams to provide diversity numbers and asking why partnership ranks aren’t diverse.

“We’re in a moment when we can use bolder terms when speaking out,” Henry said. “When I’m talking about what I expect from outside counsel, for instance, I’m going to use stronger language. Let’s change behavior by setting expectations and asking for data.”

“One of our inherent challenges is that we don’t have the capacity to train lawyers,” said Hubert Allen, the general counsel of Abbott Laboratories, headquartered outside Chicago. “We’re consequently dependent on the diversity of the rest of the profession, and on the diversity of law firms.”

It’s unusual for corporate legal departments to hire attorneys straight out of law school, so lawyers, including Black lawyers, often begin their careers at firms. Law firms have historically been unsuccessful when it comes to retaining Black talent.

But In-house teams need to recognize their ability to influence the legal talent pipeline as consumers of legal services, Allen said. For example, when hiring outside legal teams for Abbott, firms that can’t prove diversity are “quickly eliminated.”

Once those outside teams have proven their commitment to diversity, Allen and Henry said it’s incumbent on in-house leaders to reach out to associates of color on those teams and begin preparing them for future leadership roles.

Henry partially credits her own achievements to similar talent development and opportunities to build on her experience by partners at Vinson & Elkins, the firm where she began her legal career. In 2014, a few years into her own in-house career, she co-founded the NEW Roundtable to help other Black female lawyers access the opportunities to grow that were so crucial to her own career success.

As for Tuckett, he spent the first decade of his legal career at Arent Fox and didn’t consider going in-house until he met Niles and later Lucas Hinton, then assistant general counsel of DuPont.

“Meeting the two of them and getting to know them, that definitely had an influence on me wanting to be a general counsel,” Tuckett said. “The fact that they were Black had an impact.”

To contact the reporter on this story: Ruiqi Chen in Washington at rchen@bloomberglaw.com

To contact the editor on this story: in Washington at lhelem@bloombergindustry.com
in New York at rmintzer@bloomberglaw.com