Vivian Smith, a single mother from Miami who was evicted from her home during the coronavirus pandemic, is consoled by (L-R) Rep. Cori Bush (D-Mo.), Rep. Ayanna Pressley (D-Mass.) and Rep. Alexandria Ocasio-Cortez (D-N.Y.) during a Sept. 21 news conference to introduce legislation that would give the Department of Health and Human Services the power to impose a federal eviction moratorium.
(Photo by Drew Angerer/Getty Images)

President ‘s push to get legal help to tenants and billions in pandemic rent relief aid to landlords is cloaking a dilemma that existed long before Covid-19: how millions of low-income tenants will be able to make rent in the long run without help.

His Treasury Department has threatened to take rental assistance money away from states that aren’t spending it quickly, and he’s asked other agencies to help boost the supply of rental units. The Justice Department has recruited volunteer attorneys nationwide to help tenants avoid losing their homes.

But with the Supreme Court striking down the administration’s latest pause on evictions in late August, Biden’s ability to prevent them from escalating again when the pandemic subsides is limited without action from Congress. Democratic lawmakers want to pump $75 billion into housing vouchers for low-income families, an idea scholars say could make a big difference long term, but one that is tied up in political squabbles and may not become reality.

Before the pandemic, landlords filed an average of 3.7 million eviction cases per year, according to Princeton University researchers.

“It’s better here than any place else. And it’s still terrible,” said Natalie Harris, an advocate for homeless people in Louisville, Kentucky, which Biden’s team has called a model for distributing emergency rent assistance checks from the $46.5 billion Congress set aside for that purpose.

It’s unclear just how much of an impact the Justice-recruited private attorneys are having on stopping evictions—in part because they aren’t always needed yet to defend renters in court, local and national legal aid leaders said.

The volunteer attorneys are largely helping tenants fill out applications for the aid, said Ron Flagg, president of the Legal Services Corp., which funds local legal-aid providers nationwide. Treasury has yet to release numbers showing how much rental aid local officials was distributed in September, so it’s not clear yet how much the volunteer effort may have helped. 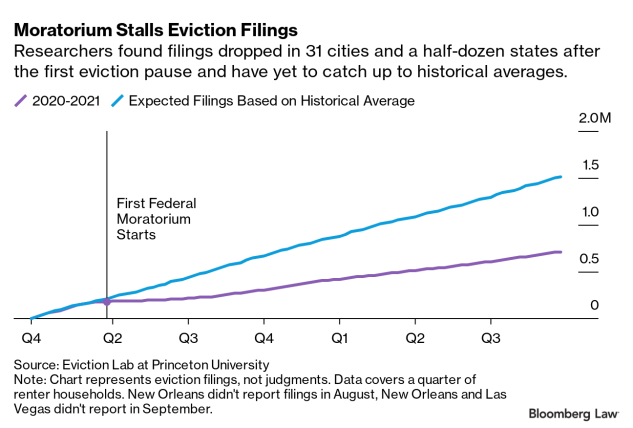 Location isn’t necessarily a barrier so long as attorneys are just helping with applications, Flagg said. An attorney in lawyer-saturated Washington, D.C., for example, can help a rural tenant in another state fill out rental assistance paperwork over video chat, even if that lawyer isn’t licensed to practice there, he said.

Once rental assistance runs out, local attorneys will be especially needed to negotiate with landlords and represent tenants before a judge, said Stewart Pope of Louisville’s Legal Aid Society.

That’s an issue because renters often lack representation in court. In Delaware, the president’s home state, only 2% of tenants have lawyers, compared to 86% of landlords, according to a 2020 study.

A group of Big Law attorneys sent out a survey to hundreds of legal aid lawyers asking what support is needed, with the goal of deploying their volunteers as requested. The group is not new to working on housing issues and is aiming to build an army of volunteers to represent renters in eviction cases past the crisis.

“How wonderful that we have extra resources right now that are mitigating the eviction crisis,” said Brenna DeVaney of the Law Firm Antiracism Alliance, the group organizing the volunteers along with the Association of Pro Bono Counsel. “But housing has always been an issue for low-income people around the country.”

States are also expanding legal aid available to tenants facing eviction. A new ordinance largely guaranteeing a right to counsel in eviction cases allowed his office to hire six new attorneys and four paralegals, Pope of Louisville said, alleviating the need for volunteer litigators. The state of Washington passed a similar right-to-counsel law earlier this year, as did Maryland and Connecticut.

Warren County, Michigan, is an exception. There aren’t enough attorneys there to counsel every tenant facing eviction—even though the state is willing to pay them, said Ashley Lowe, who heads Lakeshore Legal Aid. She’s recruiting help from a local law school.

Much of the president’s recent concrete steps to address the lack of housing inventory rely on agency actions.

His Department of Housing and Urban Development announced in September that the administration would restart a program to provide low-cost capital to housing finance agencies to develop affordable rental housing. Officials estimate the program will create or preserve 20,000 rental units through 2027.

The Federal Housing Finance Agency also increased the cap on how much Fannie Mae and Freddie Mac can invest in tax credits for developers of affordable rental housing in underserved areas.

For lawmakers, scholars say, expanding federally funded housing vouchers is one of their best options to alleviate the cost of rent long before a family falls behind on payments—if Democrats decide to keep it in the president’s massive economic and social-spending package.

The voucher expansion () approved by the House Financial Services Committee in September could help more than 750,000 households make rent once fully implemented, according to the Center on Budget and Policy Priorities. Democrats on the committee, led by Chairwoman (D-Calif.), sent a letter to Biden last week arguing that cutting that expansion would disproportionately hurt low-income renters and families of color.

Only about one in four families eligible for a voucher receives it, according to the left-leaning Center on Budget and Policy Priorities. Landlords also don’t always accept vouchers. That’s often because of the strings attached to the money, such as slow inspections and onerous paperwork requirements, said Greg Brown, policy lead for the National Apartment Association.

“If there were unlimited vouchers, I don’t think that would solve it,” Lowe, the legal aid leader in Michigan, said. “It would be better. But if there’s not places that will take them,” extra vouchers aren’t helpful.

Civil rights advocates have historically argued that refusing to rent to a voucher holder is often race-based. Black renters also make up a disproportionate share of all the eviction filings.

The same bill also includes other tactics to broaden the social safety net, such as extending monthly child tax credit payments, that are popular among Democrats and would provide a cushion for renters with kids, said House Budget Committee Chairman (D-Ky.), who represents Louisville.

Even though states and cities have built out ways to distribute emergency rental assistance, Democrats on Capitol Hill aren’t necessarily considering more funding for it. Sens. (R-Ohio) and (D-Colo.) want to set aside $3 billion per year for it permanently, but their bill () isn’t included in the broader economic plan lawmakers are debating.

“The money is going to run out sometime and that’s not going to be an option,” Pope said. “We still have to deal with what do we do when that day gets here.”

(Adds eviction filings for August and September to chart.)