A voter casts a ballot at a polling location during the primary elections in Fort Worth, Texas.
Photographer: Matthew Busch/Bloomberg via Getty Images

The Education Department is poised to push colleges to help students vote, but it hasn’t finished its promised lessons to teach kids about voting.

Agriculture Department officials are asking nutrition assistance programs to tell their recipients about voting, but they aren’t yet providing rural Americans with similar details when they apply for housing or business loans.

And the administration announced ways to make it easier for people with disabilities to cast their ballots, but the nationwide voting information website has yet to receive a promised update to make it more accessible.

President directed federal agencies in March 2021 to add voter access or registration assistance when they interact with the public. The directive has so far yielded mixed results more than a year later.

Even if federal agencies tick off every item on their voting to-do lists, the Biden administration can’t do much to improve voter access nationwide without action from Congress. And, for the most part, U.S. election policy is made at the state level and election days are rapidly approaching nationwide. Texas already held a primary in March.

“These executive orders and these plans aren’t going to change a couple of fundamental potential problems,” such as states passing laws that limit ways underrepresented groups can vote, said Martha Kropf, who studies elections at University of North Carolina at Charlotte.

The Biden administration is committed to fulfilling federal departments’ voting access promises, a senior administration official said by phone. Democrats in Congress tried in January to implement national standards on voter registration, ID, early voting, and voting by mail. House Democrats passed the bill but it failed in the Senate.

“The only thing that’s going to make this stronger is for Congress to act,” said Sonja Diaz, founding director of the UCLA Latino Policy and Politics Initiative.

The president shouldn’t push federal agencies to tackle topics outside their usual missions, including voting access, nine House Republican committee leaders said in a letter to the White House on Tuesday. The authors criticized the voting actions Biden promised last year—even though he hasn’t completed them.

White House officials last month touted early results of Biden’s directive on voting rights, including a report on improving Native American voter access. That report recommended that poll workers offer support in Native languages, citing the thousands of Native American voters that speak a language other than English at home. 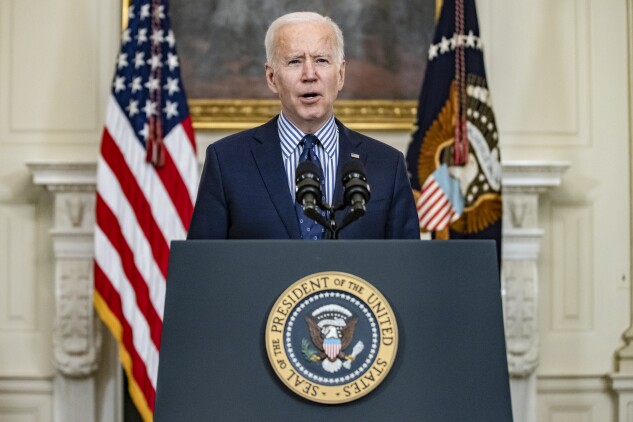 President Joe Biden speaks from the State Dining Room following the passage of the American Rescue Plan in the U.S. Senate at the White House on March 6, 2021.
Photo by Samuel Corum/Getty Images

Reaching Americans where they work or spend time, like the directive aims to do, can help counteract misinformation while registering more voters, voting scholars and a local election official said. The administration’s efforts to engage students and members of the military are two places to achieve that, they added.

Universities under federal law are required to help their students register to vote. But the same outreach doesn’t always happen for other young people, including recent graduates or young Americans who don’t attend college.

Americans age 18-34 have long turned out in lower numbers in national elections compared their older counterparts.

“There’s so many support systems during their university years,” said Kei Kawashima-Ginsberg, a Tufts University researcher who studies young voters. “And even if they have college credentials, once they’re out, there’s nothing.”

American families also trust schools more than national and local elected leaders, according to advertising researchers, making them an ideal spot to counter incorrect information about voting. It’s not enough to offer young people the chance to register to vote—federal officials need to answer their questions, Kawashima-Ginsberg said.

We need “every person that works with these governmental agencies to take it upon themselves to think about ‘how do we welcome these voters? and ‘what are we not getting about these people that are not registering to vote?’” Kawashima-Ginsberg said.

Both can be helpful in areas with large military population, such as in North Carolina, said Gary Sims, a Wake County, N.C.'s election official. North Carolina will hold primary elections in May, after the statefinalized its congressional map for 2022 races in February.

Sharing information about voting by mail could also improve access for Asian Americans, said Christine Chen,executive director of Asian Pacific Islander American Vote, a nonpartisan organization. More than half of Asian American voters preferred to cast a ballot by mail, according to the group’s 2020 survey

The administration, for example, could push states to make voter registration websites more accessible for people with disabilities, said Sarah Blahovec, voting and civic engagement director at the National Council on Independent Living.

“We have these laws on the books but compliance has been a really big issue for a long time,” Blahovec said.

To contact the editors responsible for this story: at csaenz@bloombergindustry.com; at bkohn@bloomberglaw.com