Ben Crump, the attorney representing George Floyd's family, speaks to the media outside of the White House on May 25, 2021.
Photographer: Tasos Katopodis/UPI/Bloomberg

President said he hopes for a swift deal on legislation to overhaul U.S. law enforcement after he met with members of ’s family on the anniversary of his killing by a Minneapolis police officer.

Negotiations on Capitol Hill to make the police more accountable for injuries and deaths they cause are progressing, but lawmakers didn’t meet Biden’s goal of sending him a bill by Tuesday.

Biden and Vice President met privately with Floyd’s relatives, including his young daughter Gianna, at the White House on Tuesday. 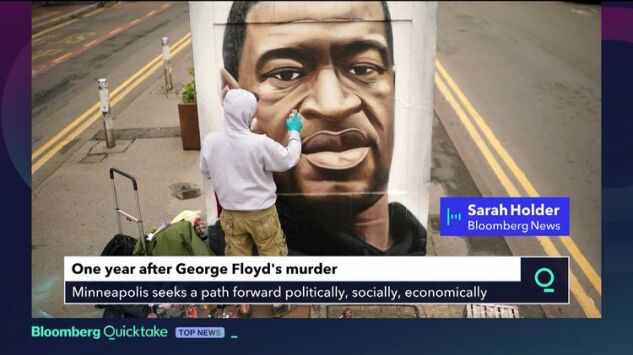 “I’ve spoken with the negotiators,” Biden told reporters afterward, as he departed the White House for Wilmington, Delaware. “I’m hopeful that sometime after Memorial Day we’ll have an agreement on the George Floyd legislation. So I’m optimistic.”

Speaking to reporters outside the White House after the meeting, Philonise Floyd -- George Floyd’s brother -- said the family was “just thankful for what’s going on.” 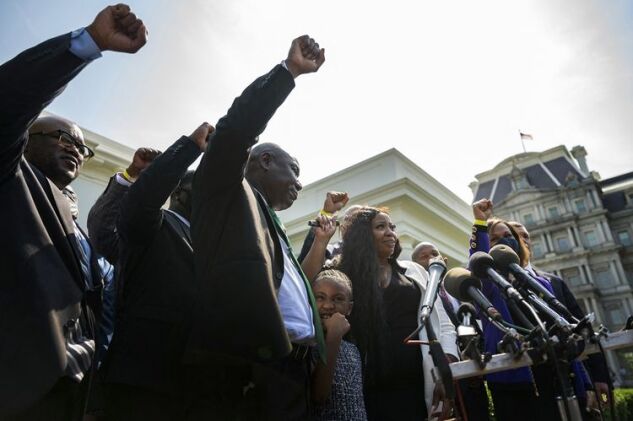 Biden called in April for Congress to pass the George Floyd Justice in Policing Act by Tuesday’s anniversary, but has not applied public pressure since then. Instead, the White House has ceded control to the congressional negotiators, including Representative of California and Senator of New Jersey, both Democrats, and Senator , a South Carolina Republican.

The approach reflects “what we feel is most constructive to move these negotiations forward and to get to the final outcome that everybody who advocates for justice, who advocates for reform wants to see, which is signing this bill into law,” White House Press Secretary told reporters Tuesday.

Floyd family attorneys, speaking after the meeting with Biden, called for Congress to pass the legislation. “We have to respect the spilled blood that’s on this legislation,” said , one of the lawyers. “This must be meaningful.”

Family members later met with Scott and Republican Senator , also of South Carolina, at the Capitol before heading into a meeting with Booker.

“I was pleasantly surprised and encouraged by their thoughts,” Scott told reporters, without giving details.

Crump said after that meeting that any deal would be “historic” in nature after decades of inaction on policing reform.

“We have to make sure we don’t squander this opportunity,” Crump said, standing alongside members of Floyd’s family. “Everybody’s engaged to say we can do better to solve this American issue and the only way we can solve it is working together. It hasn’t worked for us for 50 years trying to work apart. We have to have bipartisan support with everybody saying this is our issue.”

The Floyds also met with House Speaker , Bass and other congressional Democrats at the Capitol on Tuesday.

Biden described himself as charmed by Gianna Floyd.

“She threw her arms around me and gave me a big hug and wanted to sit in my lap,” he said. She said, ‘I’m really hungry.”’ He chuckled. “She said, ‘Do you have any snacks?”’

“My wife would kill me,” he joked. “We gave her some ice cream. She had some Cheetos and I think she had some chocolate milk, I’m not sure.”

White House Domestic Policy Adviser in a Tuesday interview with MSNBC called the policing legislation a “a very important step.” The talks, she said, were moving forward in good faith “to see if we can get a meaningful police reform out of the Senate that will move the ball forward as far as we possibly can.”

Bass said Tuesday at an Axios event that she’s “hopeful that we will continue that forward movement and will have a bill on President Biden’s desk in the next few weeks.”

The biggest sticking point in the talks is the legal doctrine of “qualified immunity,” which shields police officers from being sued for violating someone’s constitutional or legal rights. Senate Republican leader has said he won’t back any bill that removes the legal protection for individual officers facing civil lawsuits, and it would take 60 votes to advance the legislation in a Senate split 50-50 between the two parties.

The policing act, which passed the House, would ban choke holds and federal no-knock drug warrants, prohibit racial and religious profiling and establish a national standard for police department operations.

The legislation followed last year’s killing of Floyd, a Black man, at the hands of a White police officer in Minneapolis. Floyd’s killing, recorded on video, touched off protests worldwide and gave fresh urgency to discussions about racial inequities and police treatment of minorities. The officer, Derek Chauvin, was convicted last month on second- and third-degree murder and second-degree manslaughter in Floyd’s death.

Harris, in a statement after the meeting, said “passing legislation will not bring back those lives lost, but it will represent much needed progress.”