Members of the military stand along the abbreviated parade route on Pennsylvania Avenue on January 20, 2021 in Washington, DC.
Photographer: Patrick Smith/Getty Images

President signed an order Monday that lifts the Trump administration’s ban on transgender troops serving in the military.

The move fulfills a Biden promise to reverse the policy in his first days in office and could affect hundreds or even thousands of service members who were barred from serving openly or transitioning to their preferred gender under former President Donald Trump.

“What I’m doing is enabling all qualified Americans to serve their country in uniform,” Biden told reporters at the White House before signing the order.

, Biden’s defense secretary, supports overturning the ban. He was to be sworn-in by Vice President Kamala Harris after Biden signed his order, but reporters were not permitted to observe the ceremony.

“If you are fit and you’re qualified to serve and if you can maintain the standards, you should be allowed to serve,” Austin said at his confirmation hearing at the Senate Armed Services Committee last week. 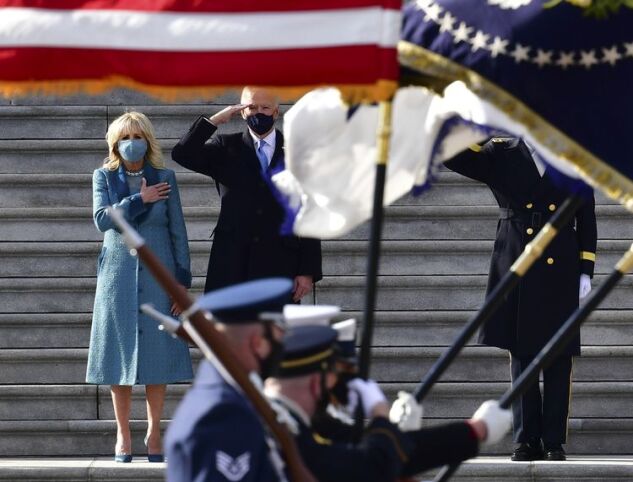 US President Joe Biden salutes as First Lady Jill Biden puts her hand on her heart as they review the readiness of military troops on Jan. 20.
Photographer: David Tulis/AFP via Getty Images

Trump surprised his own aides, Pentagon leadership and Congress with a tweet in 2017 announcing that he would roll back an open-service policy, citing costs and disruption. A restrictive new policy was designed by former Defense Secretary and took effect in April 2019.

The Supreme Court allowed the Trump policy to remain in place as federal lawsuits filed by transgender troops continue to be heard.

The Obama administration spent nearly two years studying transgender service before ordering a 2016 policy that allowed those troops to serve openly and prohibited them from being discharged or separated based on their gender identity.

While the Trump ban was in effect, roughly 900 already-enlisted transgender service members were allowed to continue serving under the previous Obama administration policy. But new transgender troops were barred.

Biden promised during his presidential campaign that he would allow transgender troops to serve and get required medical care, calling the ban “discriminatory and detrimental to our national security,” on his campaign website.

“Allowing all qualified Americans to serve their country in uniform is better for the military and better for the country because an inclusive force is a more effective force,” the new administration said in a fact sheet Monday announcing the change. “Simply put, it’s the right thing to do and is in our national interest.”

The executive order also requires a review of any troops who were separated due to transgender status.

“This is a major step in the defense not only of America but of American values,” Aaron Belkin, director of the Palm Center advocacy group, said in a statement.

To contact the reporter on this story:
in Washington at ttritten@bloomberg.net

To contact the editors responsible for this story:
at sbabbage2@bloomberg.net