Justin Butts, livestock manager at Soul Fire Farm and one of a dwindling number of Black farmers, checks livestock on Sept. 25, 2020 in Petersburg, N.Y.
Angela Weiss/AFP via Getty Images

The nation’s shrinking pool of minority farmers is due to receive $5 billion of assistance in the Covid-19 relief bill, reflecting the Democrats’ focus on the lingering impact of racism and their battle to take control of the Senate.

At a time when much of Washington is fixated on the influence of moderate Democratic Senator of West Virginia, the new debt relief program targeted specifically to Black, Hispanic and Native American farmers also shows the political weight of . The Black freshman senator’s runoff win in Georgia, along with that of fellow Democrat , tipped the Senate to Democratic control. 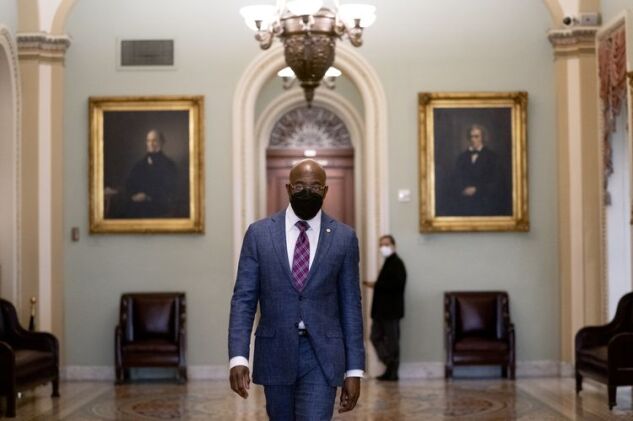 “For too long, farmers of color have been left to fend for themselves, not getting the support they deserve from the USDA, making it even more difficult for them to recover from this pandemic,” Warnock, who was a driving force behind the provision, said on the Senate floor, referring to the Department of Agriculture.

The idea provoked unified opposition from Senate Republicans, with all 49 GOP members present supporting an unsuccessful attempt to strip out the aid. Senator of Pennsylvania denounced the prospect of federal funds going to farmers of the “right race” as “unconstitutional” and “outrageous.”

President ’s $1.9 trillion relief package, scheduled for a final vote in the House as soon as Tuesday, amounts to a dramatic reversal from the approach of former President ’s administration to stimulating the economy, with spending heavily tilted toward poor and middle-class households that have taken the brunt of the economic downturn. It’s also a sharp contrast from Trump’s signature tax overhaul, which mostly benefited corporations and the wealthy.

The assistance for minority farmers, designed to counter a history of discrimination in Agriculture Department lending and aid, follows a presidential campaign shaped by Black Lives Matter protests touched off by ’s death in police custody and the disproportionate toll the pandemic has taken on African Americans, Hispanics and Native Americans. 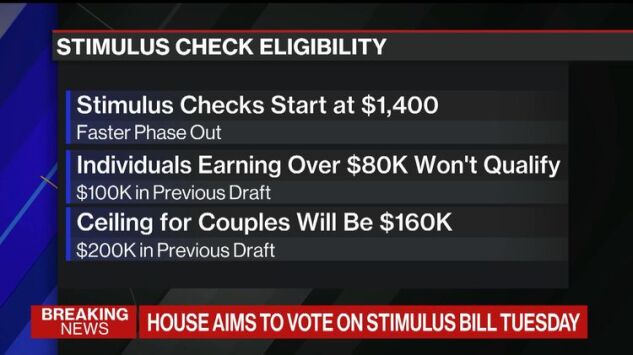 WATCH: Biden’s $1.9 trillion package will sail through the House when it takes up the bill on Tuesday, according to Democratic lawmakers Kevin Cirilli reports.
(Source: Bloomberg)

Biden owes his presidency to support from African-Americans in the Democratic primaries and his party control of the Senate in part because of the enthusiasm of Black voters in Georgia mobilized by former gubernatorial candidate .

That one of the Biden administration’s first legislative advances on racial equity is coming in agriculture -- a policy area typically dominated by farm state politicians who often represent overwhelmingly White constituencies -- shows how the political constellation on farm policy shifted this year.

Representative of Georgia became the first Black chair of the House Agriculture Committee. Representative , also from Georgia, just began his second term leading the powerful Agriculture Appropriations Subcommittee, the first African-American to hold that post. Georgia has the fifth-largest population of Black farmers.

Warnock and Senator of New Jersey this year joined the Senate Agriculture Committee, only the second and third Black members ever to do so.

Up for re-election in 2022 because he filled a vacant seat, Warnock already can point to a tangible win for Black farmers in his home state of Georgia.

Warnock, who is the pastor of the Reverend Dr. ’s former church in Atlanta, said the pandemic “illuminated and exacerbated long-standing disparities” such as the discrimination against minority farmers.

Black farm ownership plunged over the past century amid a record of discrimination by USDA administrators in denying or slow-walking loans and aid to minority farmers and sometimes-violent intimidation by White supremacists seeking to drive African-Americans from the land as they sought voting and other civil rights.

Many Black farmers also have been hindered by a system of ownership called “heirs’ property,” a vestige of the Jim Crow era in which a type of collective ownership was passed down, often to multiple relatives, without a will.

Multiple people sharing heirs’ property leaves farmers vulnerable to relative going to court to force a sale, said Thomas Mitchell, a law professor at Texas A&M University. For decades, courts have routinely obliged in heirs’ property cases, particularly in disadvantaged communities, he said. And many African Americans lacked the means or ability to hire lawyers -- or had a well-founded distrust of local courts.

A century ago, there were almost 1 million Black farmers in America, representing 14% of U.S. farmers. By 2017, the last agricultural census, the number had dwindled to about 45,500--1.3% of the total number of producers. Black-operated farms accounted for only 4.7 million acres of farmland, 0.5% of the total.

, the ’s president and a fourth-generation Virginia farmer, described the targeted stimulus aid as “a drop in the bucket” of what’s financially owed to farmers of color previously excluded from agency programs. But he called it “the most significant legislation” for Black farmers since the Voting Rights Act.

The coronavirus relief measure provides $4 billion for debt relief for minority farmers. Another $1 billion is dedicated to assistance, including help addressing heirs’ property issues, grants to historically Black colleges and universities and funding for a racial equity commission to “root out” discrimination at the USDA set up by Biden’s agriculture secretary, .

Vilsack, who served eight years as ’s agriculture secretary, had been criticized by some advocates for not being aggressive enough in addressing discrimination during his previous tenure running the department.

But he embraced the assistance plan for minority farmers when Warnock introduced it and worked on its behalf. He applauded the debt relief provision as “historic” in a statement issued Saturday after the Senate passed the relief package.

“For generations, socially disadvantaged farmers have struggled to fully succeed due to systemic discrimination and a cycle of debt,” Vilsack said. “On top of the economic pain caused by the pandemic, farmers from socially disadvantaged communities are dealing with a disproportionate share of Covid-19 infection rates, hospitalizations, death and economic hurt.”