Startups have new rules governing—and boosting—how much capital they can raise through crowdfunded stock sales.

The Securities and Exchange Commission updated this month its securities offering exemption rules—on how companies win exemptions from registration requirements when selling securities outside public markets—to address complaints that they’re too complex and cumbersome.

Smaller businesses can now earn millions of dollars more through crowdfunding without undergoing the SEC’s registration process. The agency is also hoping to give individual investors opportunities to take bigger bites out of some offerings.

1. What are the biggest changes?

One of the most talked-about rule tweaks eases startups’ attempts to raise money through crowdfunding, under the SEC’s Regulation Crowdfunding, or “Reg CF.”

The maximum amount that startups can raise over a 12-month period in online marketplaces and other crowdfunding sources—while being exempt from SEC registration requirements—was raised to $5 million, up from $1.07 million.

Reg CF was seen as providing a path for non-accredited investors—or those typically making less than $200,000 per year— to get in on the ground floor of up-and-coming businesses, while also retaining investor protection.

Small- to mid-size companies also saw changes in how much they can raise.

The 12-month limit for a company engaged in a primary, or first-time, equity offering while exempt from registration, under the SEC’s “Regulation A”, rose to $75 million from $50 million.

Limits on secondary sales under Reg A were lifted to $22.5 million from $15 million.

Capital-raising limits under “Regulation D"—a registration exemption for companies selling up to $5 million of their securities—now sit at $10 million.

The SEC also removed the limit on the dollar amount that accredited investors—those deemed experienced or wealthy enough for risky bets—can contribute in crowdfunding campaigns, giving them a chance to take a bigger bite on any private offering

Non-accredited investors continue to face investment limits. But the new rules allow them to use a different calculation to determine what they can invest.

Investors with annual incomes or net worth greater than $107,000 can contribute up to 10% of the highest number.

Additionally, the updated rules let companies “test the waters,” or generally solicit potential investor interest, in an offering before actually undertaking one.

3. Why is the SEC relaxing these rules?

The SEC first floated potential changes, in part, to respond to confusion around the use of multiple offering exemptions. The agency also had received complaints that current fundraising limits might have stifled participation and company growth.

The ability to raise millions of dollars more each year from non-accredited investors is seen as a big deal for many startups. So is the chance to earn more from wealthier investors.

Changes to investor participation requirements might also expand their pool of backers and reduce the total number of backers needed. 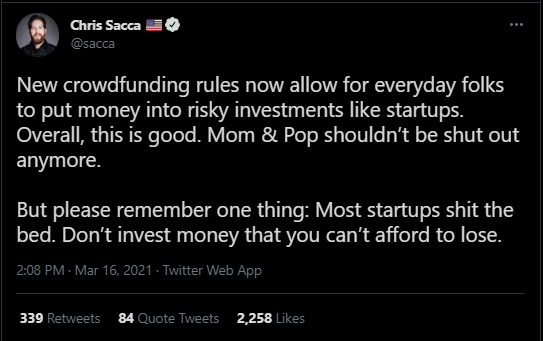 4. What were the rule change opponents’ concerns?

Democratic SEC Commissioners who voted against the rule changes aired their concerns in November over investor protection and the effect on public markets.

“These rules continue the steady erosion of traditional and important boundaries between the public and private markets, which further disincentivizes public offerings and threatens investor protection in both markets,” Allison Lee, who’s now the agency’s acting chair, said in November.

To Learn More:
—From Bloomberg Law

Crowdfunder Wants to Bring Alternative Investing to the Masses

To contact the editor responsible for this story: at ryu@bloomberglaw.com; at jmeyer@bloombergindustry.com